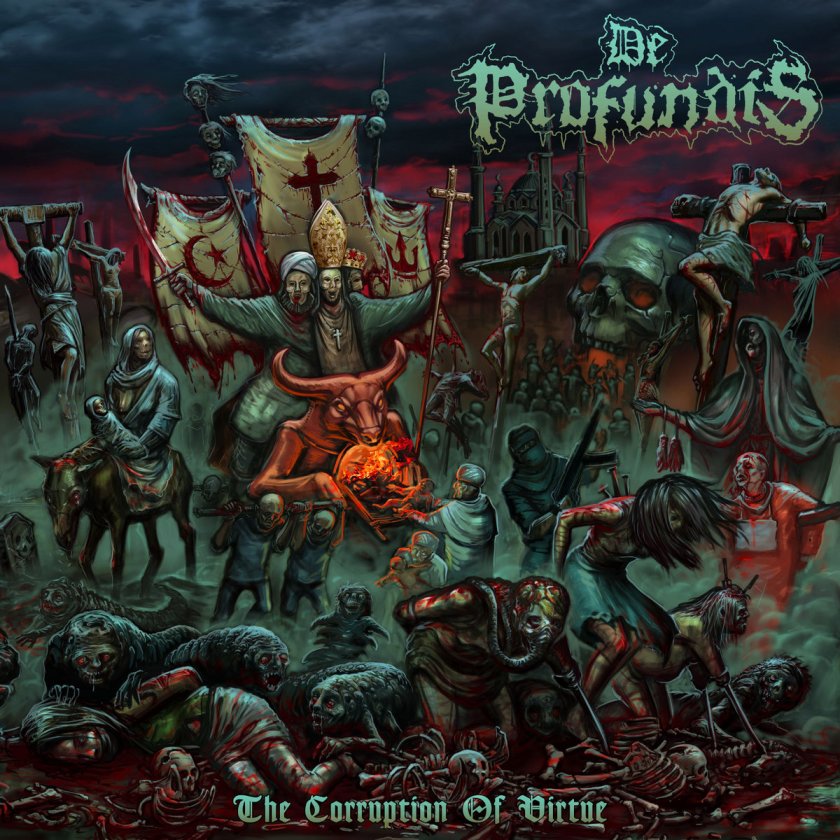 Over the course of fifteen years and five LPs, UK’s De Profundis has shaped their sound into a special shade of death metal. Progressive, melodic, groovy, highly destructive, and at times blackened to a crisp, this band doesn’t fuck about with convention. Their last record, The Blinding Light of Faith (2018), was a lesson in savagery and, to put it mildly, anticipation has been high for new De Profundis material since. The wait will conclude on October 7th with the release of their sixth album, The Corruption of Virtue.

Transcending Obscurity Records has gifted us all with an early listen to a track called “Relentless March.” If your volume is currently set somewhere in the mid-range, I recommend putting a stop to that nonsense right now. Turn this bastard up!

Noticable immediately is the bass, which is not a new thing for De Profundis. What is new, however, is the bass player, Steve Woodcock. Taking over for long-time member Arran McSporran, Woodcock takes the reigns with a ferocity fans may not see coming. Matched perfectly with the drumming of Tom Atherton (who was the new guy on the last De Profundis record), the precision of this rhythm section could drive a railroad spike through your forehead. Add to that the way they dance around the palm-muted, tremolo-picked riff and growl De Profundis has perfected over the years, and you’ve got yourself a runaway train. In other words, get the fuck out of the way!

The guitar leads are excellent. Flawlessly calculated, tight as hell, and hard to tell where one dude starts and the other stops. Soikot Sengupta and Paul Nazarkardeh both clearly possess shredder chops, but what makes them so badass is that they keep their abilities closer to the vest than many progressive guitarists. De Profundis is certainly a progressive death metal band, but without the often distracting technical elements that can’t ever seem to get out of their own way.

Vocalist Craig Land is as unstoppable as ever, raging about the shedding of blood, and apocalyptic devastation; eviscerated corpses decomposing on the fields of wars started by hypocritical religious authorities, and a desire on his part to burn it all down. Familiar but fertile territory explored in great detail throughout the record and spectacularly depicted in the cover art done by Alex Tartsus.

There’s a club near where I live that is often overtaken by karate kids. We all know the type. I can almost see De Profundis destroying each and every one of them. In fact, take another listen to “Relentless March” with that in mind. Send pictures of those evil smiles to The Metal Wanderlust.