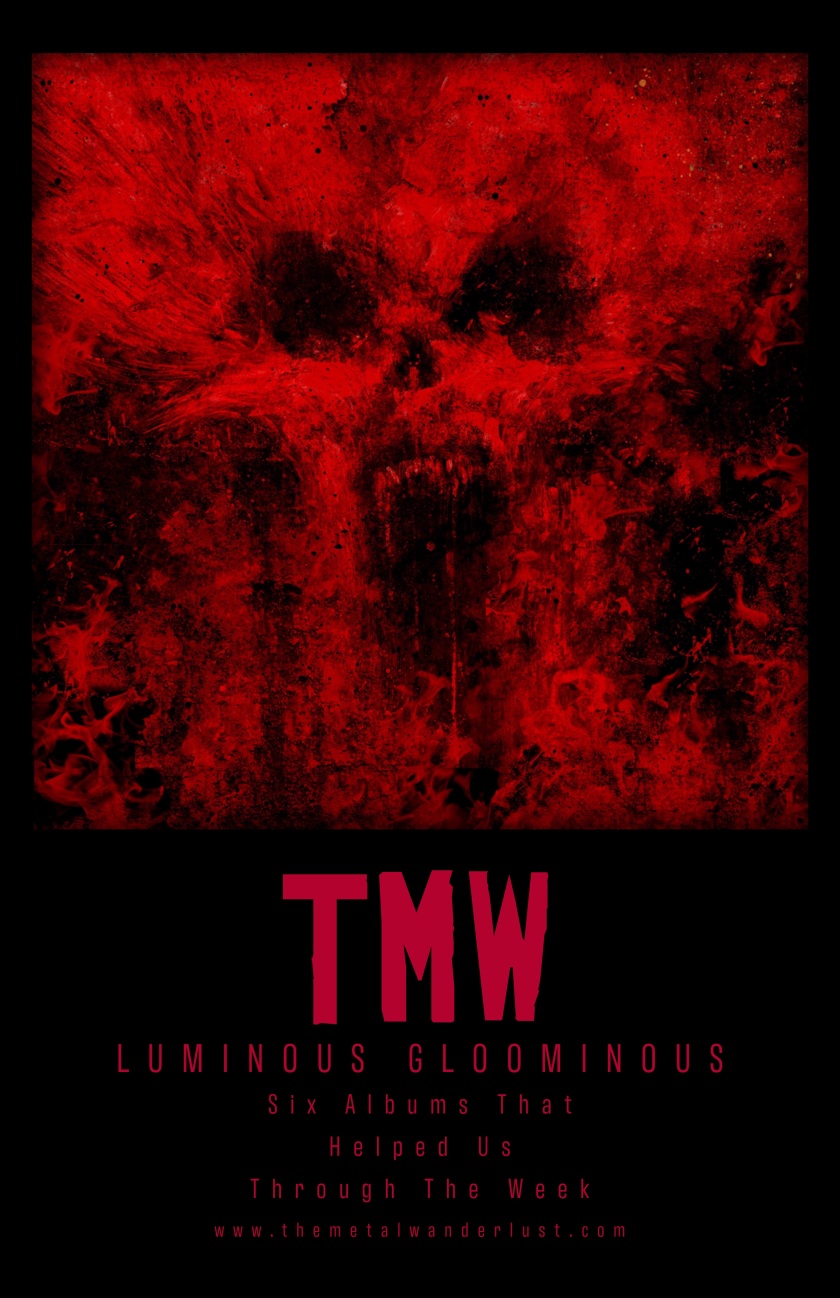 Our first issue of Luminous Gloominous got some positive feedback, and that made us here at TMW feel pretty damn good. The choice to continue the series wasn’t a difficult one to make, as there is no shortage of incredible, life-altering Metal to share. Hopefully, as time moves on, this feature can provide some sort of comfort for anyone who might need some.

Since this is only the second LG feature, I’ll reiterate the introduction from volume one below:

“Good mental health maintenance, for many, requires ample time spent listening to music. Most of us can attest to being in an extremely dark place and hearing an album that lights a spark bright enough to get us home. That’s Luminous Gloominous. The music that provides luminescence within the gloominess.

In this column, we will focus on the positivity Heavy Metal music brings to our lives, and will do our best to explain why sometimes some of the darkest themes imaginable can lead us to places of contentment and peace. Luminous Gloominous is the healing quality of heavy music, and it knows no boundaries.”

Obviously, for many, Meshuggah was going to make some noise over the weekend. It has been six years since The Violent Sleep of Reason, so anticipation for Immutable was high for that reason alone. I’ll admit that on first listen, the first four tracks left me slightly disappointed. Sure, it sounded like Meshuggah, but that was the let down. I didn’t hear anything much different from any other Meshuggah, and I was ready to write the record off as mid-level — although admittedly, mid-level Meshuggah is still quite destructive — then “Ligature Marks” came on, and I damn near shit the bed.

Meshuggah is one of those bands, I think, that fans come about listening to regularly for very personal reasons. For me, aside from the fact that Nothing and ObZen played pivotal roles in helping me through an extremely harsh time in my life, I had the chance to see Meshuggah in 2012 with my son in Detroit. He was thirteen years old, and Decapitated opened. Dad of the year? Seeing as how the boy probably remembers the set Baroness played in between the two, I’d say the whole excursion was a massive success.

My point is this: Meshuggah made a lasting impression on a young mind, and provided my son and I with years of memorable drug-free flashbacks. Koloss was the newest album out at the time, which I’ve always really loved. I can’t say for sure if that’s because of the concert experience, or because Koloss is an excellent Meshuggah record. Either way, to my ears, in a battle between the two — Immutable emerges victorious.

There isn’t much doubt in my mind that this album will feature heavily in my playlists for the remainder of the year and, most likely, beyond.

Growing up in Detroit, there are a lot of heavy influences. We have great Hip-Hop and Metal scenes, but our Punk/Hardcore scene is something else. That’s where I came up. With the rest of the losers and outsiders who weren’t cool enough to fit tidily into one little box, or who didn’t have the money or privilege to be welcomed into other groups.

I became a fan of Blood For Blood from Boston in the early 2K’s. I was in my late teens/early 20’s. I was going through a lot of shit and White Trash Rob felt like he was writing albums like Spit My Last Breath and Livin’ In Exile for me. Poor kids who dealt with abuse and had nothing but hate for society; and trying to deal with it the only way we knew how – Violence, booze, and drugs. None of us were gonna make it to 35 so who gave a shit, right?

Bands like Blood For Blood, Hatebreed, Crown of Thornz, and H2O helped pull me from my darkest depressions, helped me kick my alcohol addiction and in all honesty, saved my life. They were talking about personal struggles and life on the streets, not just abstract brutality for the sake of being “heavy.” I probably would have drank myself to death or found some other way to shuffle myself loose the mortal coil if it wasn’t for something in the inner strength of those albums, and their messages.

Fast forward 10 years and Blood for Blood is no more. Rob beat his own heroin addiction and grabbed some of the guys from Cold as Life in Detroit and some other great hardcore bands and formed Ramallah. The first few Ramallah albums were very similar to Blood For Blood. Tracks like “Kill a Celebrity,” and “Heart Full Of Love” were filled with contempt for modern society like I was used to, but there was a weird tinge of hope there that wasn’t before.

The Last Gasp Of Street Rock ‘N’ Roll came out in 2020 and it’s an album for those of us who didn’t think we would be here. The first track opens with lamenting the music that pulled us through and got us here, as well as the loss of our people. It opens with “There’s a time when you wake up and have more dead friends than alive ones. That time came for me 20 years ago.” With lines like “Whatever happened to the hardcore music we all know and loved? Don’t try and tell me times have changed because people like us are living the same old Hell.” And “All you sad death metal fans masquerading as hardcore, can get fucked,” it really sets a stage.

“I Don’t Believe” is that throwback hatred, tinged with this newfound hope. “You keep your fantasy, I’ll take care of me,” is a bit of a cry from fuck your society, and I will burn it to the ground, y’know? You get so many people who are thinking they’ll be CEOs one day and have mansions. They don’t see the truth of how shit works, nor do they want to.

I needed a song like “Dead Boys and Girls Anthem” when I was a teenager and into my 20’s.

“Friends are great, but they cannot save you.

Drugs kill the pain, but they never heal you.

I know hope is a bitch and she betrayed you.

All I can tell you kid is I’ve been there before.”

That may have been enough to save me a lot of blood, tears, and money.

“City Boy,” and “Bye-Bye” are reworks from older Ramallah releases, but still strike that nerve in my soul. “I Seen You Crawling” is all about watching someone struggle with addiction and not being able to help them. You can only hope they learn from you. “The Times We Had” is all about shitty relationships. Who hasn’t been involved in those on one side or the other?

“The Last Gasp of a Wasted Youth And Wasted Life” is the apex of this album, and really helped drag me through the last two weeks when I just wanted to tap out.

“Do you remember when we were young

we got nothing from no one.

There’s no justice, there’s just us.

Fuck you and fuck society too

That’s what we said.

This record is such an emotional journey. From the cover art to the final notes of the nearly ten minute title track, Tide Turns Eternal is absolutely glorious. Atmospheric Death Doom at its finest and most infections, as boisterous as it is simple, and every time I turn it on… I just can’t stop listening.

The biggest reason for this is Derrick Vella. Best known (to me) as a member of Tomb Mold, his work on Tide Turns Eternal if fucking flabbergasting. Just listen to “In Cipher I Weep.” Seriously. Do that right now.

See, what happens next is a song called “The Needful,” and it answers every question “In Cipher I Weep” leaves unanswered. The whole album is like this. Sort of an esoteric call and response from track to track. I don’t know this for sure, but I have a hunch that playing these songs in a different order would change the room your mind walks into just enough to generate an entirely new experience.

Music like this doesn’t grace the earth often enough. It is at once pulverizing and lovely. Violence both whispered and screamed. A dream come true turned nightmare soon, fondly inching its fingers through your mind, this album will stay with you forever.

The quartet from Bangalore, India are back with their abrasive and frantic sound.  Maneating Orchid’s second full length, Hive Mind builds on the sound established on their previous album Miasma, a lethal mix of Prog Metal and Mathcore. All instruments have been turned up a notch.

A quick glance at the song titles reveals the socio-political nature of the  lyrics, topics that are relatable to multiple countries around the world. The band are a rarity from India, that are not afraid of speaking their minds.

Hive Mind is a challenging listen, with its lack of hooks and unpredictable structure. An album that commands complete attention.

I’m not the best person to write about Voivod. I’m not ashamed to admit the band had me flummoxed for years. One of my oldest friends was listening to Voivod in ’89, which means that for over thirty years, whenever Voivod was discussed, he heard variations of “I can hear why you love it, but… I don’t get it.” The music has always been enjoyable, but above my head, and to be honest that’s the way I like it.

Another friend of mine, when asked what album helped him through the week, simply replied, “Voivod.” The amazing thing was, I knew immediately it didn’t matter what Voivod I chose, because Voivod would provide the necessary ball busting regardless. A mere human like me doesn’t need to “get it,” as long as he does what he’s told and puts the lotion in the basket.

Wampyrinacht – Night of the Desecration

As I continued to dip my toes into the murky waters of Black Metal last week, in blew an easterly malevolent force called Night of the Desecration by Wampyrinacht. Good Lord, this is a devastating record!

Iron Bonehead Productions is releasing this one at the end of May, and when that time comes I am confident it will make an impression on anyone who listens. I can’t tell you how badly I wish it was out right now… If for no other reason than you could all listen to the title track. That eleven minutes alone is worth the price of admission, as it takes flight in a half dozen directions yet remains connected to the whole. Brilliance!

The only available single, “The Church Of Thorns,” is no slouch in the menacing department. Which is good for you all, because for now it’s all you get! May it haunt you all the way through the end of spring.