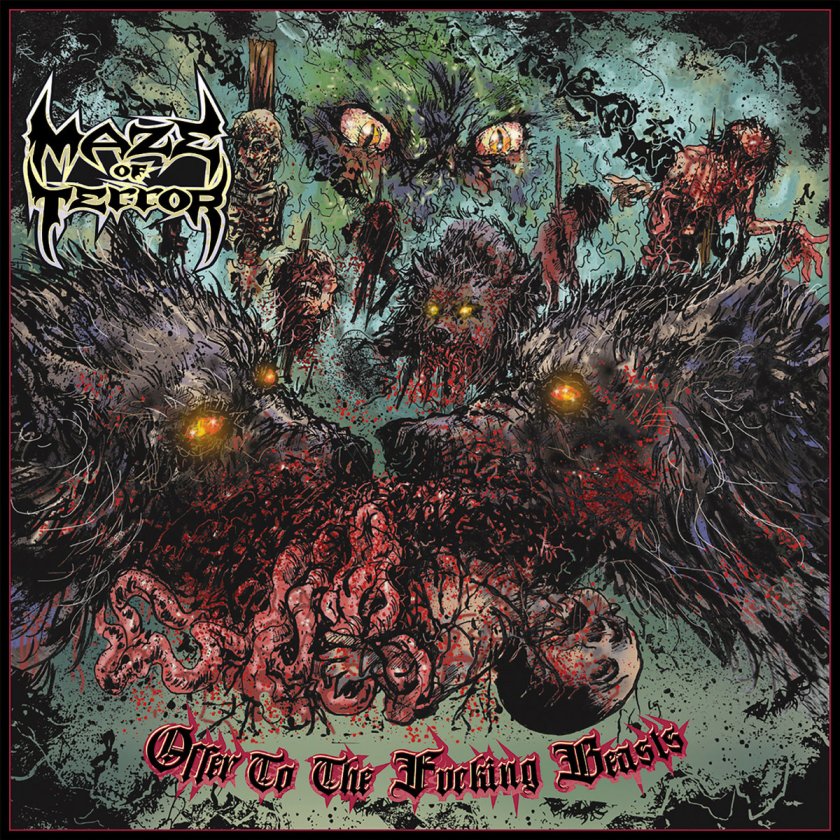 In my head, I like to think that Thrash is the demon version of a lullaby. I’m thinking Brahms “Weigenlied,” or “Rockabye Baby,” except with malicious and brutal vocals, flesh searing riffs, and body bruising melodies.

Imagine if you will, our hero little Damien, lying in his crib made from the trophy bones gathered from the floors of Hades, getting serenaded by Mother Demon while she sews together a doona made from the flayed skins of fresh souls.  In the corner of this devilish nursery sits a dilapidated gramophone with a turntable held in place by the entrails of an unlucky miscreant. The speaker is made from a thousand mouths of sinners overlapping on top of each other with a severed finger with a sharpened nail as the needle.

Got that picture in your head? Good. Now imagine the soundtrack that is playing in the background on that gramophone serenading sweet Damien to sleep.

Having trouble? Well, wonder no more because I’m here to tell you that Maze of Terror are providing the tunes to this scene via their second album “Offer to the Fucking Beasts”. Cool name for an album, eh. No pretentious double meanings there!

Formed in 2011, this Peruvian Thrash Metal spawn have released three EP’s, a couple of split albums, and one full length album (“Ready to Kill,” 2016). All of this violently devised and orchestrated together by three members with the monikers of Leviathan (bass & vocals), Hammer (drums),  and Criminal (guitars).

Don’t let the fairy-tale intro lull you into a false sense of tranquillity and calmness. Released 26 August 2021, “Offer to the Fucking Beasts”, is brutal and not for the faint hearted, make no mistake! A look at the visually cracking cover is the supreme giveaway of what is laid out for your auditory amusement. Shredding guitars, pummelling drums, and thumping bass on top of virulent blackened vocals, which all combine to generate the foreboding menace that slithers throughout the album.

The chant at the beginning of “Priest of the Ancient Ones” invokes the ancient spirit Cthulhu, who is the great grandson of the greatest evil of the universe, and I can’t think of anything more apt than to start this album. A true evil, because beyond any shadow of doubt, this album will raise all things wicked within your mind (and, if played at the volume it deserves, your neighbors minds).  It’s also one of my favourite tracks because the riff and vocal attack will beat down on your carcass until you’re reduced to ashes and blown into the netherworld.

“Angels of Acid” thunders and explodes with, arguably, one of the best riffs ever made for circle work. Another cracking track which brandishes the same heaviness and rage is “Blood Horror Cult,” with an emphasis on the extreme pounding of skins that is prominent throughout the record, along with the blunt force violence of the vocals.

Further examples of the savagery and intensity include “Death by Fire,” “Starbeast,” and the final track, “Shub Niggurath Awakes,” which all deliver a shockingly chaotic and relentless, almost manic, bludgeoning.

“Offer to the Fucking Beast” is a seething, uncontrollable, face crushing organism that’s superbly intense, and not at all well behaved. Maze of Terror has released an excellent and powerful second album.