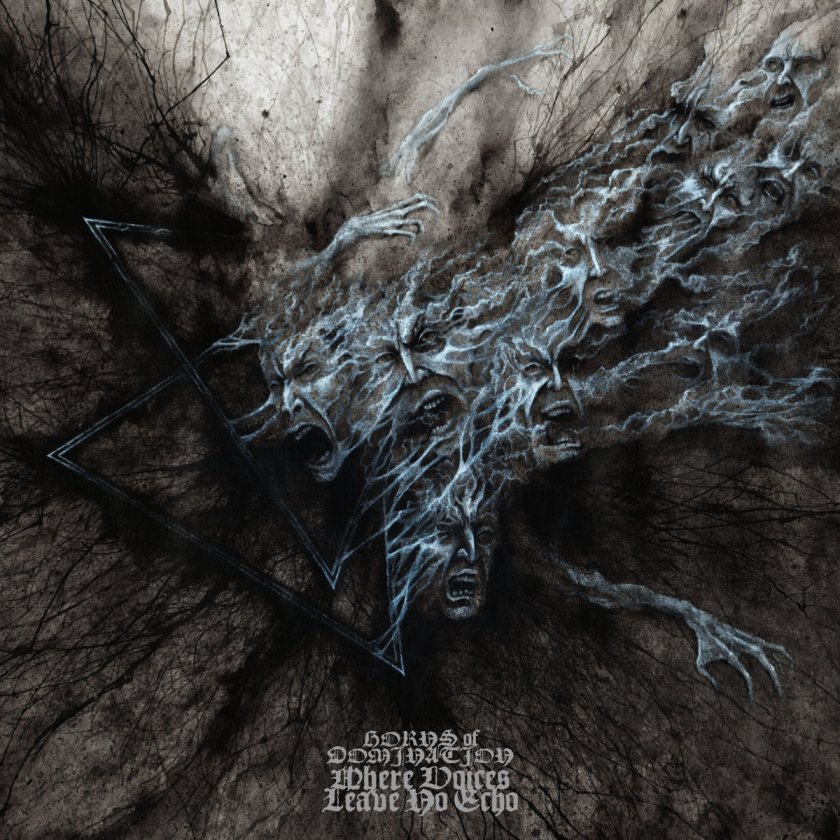 Six years ago, a new group composed of three veterans of the German extreme Metal scene launched a demo. Horns of Domination was born. The reception of the demo was quite enthusiastic in the underground. This was a very exciting brew of old Death Metal and Black Metal, concocted with talent and virtuosity. The whole had a thick crust of noise covering great compositions. Many got excited about the coming of the first release. But six years passed. Today, “Where Voices Leave No Echo” is finally spinning on my turntable. Was the wait worth it?

Six years is a damn long time between a demo and a debut, and Horns of Domination don’t have the usual reasons other projects mention to justify the delay. There were no changes in their lineup, they did not split up, and none of them were in prison. In fact, during this time, they regularly played gigs and festivals with a lot of success. The last one was at the Hell Over Hammaburg Festival 2020 (Hamburg, Germany) just before the first lockdown due to COVID-19. They killed!

Apparently, they have rehearsed and composed quite regularly over the years. So, why wait so long? One of the reasons appears clear when listening to their debut album: they wanted to go in a new, more complex musical direction. I could imagine this entered into conflict with the legendary perfectionism of guitarist D.P., known as an ex-member of Psychedelic Doom combo Obelyskkh, and until very recently a member of Death Metal masters Venenum. He also has a spectacular Atmospheric Black Metal solo project called Désir de Mourir. I have been eagerly awaiting some new material from this project since bloody 2011! And there is existing material, but nothing D.P. sees fit for release. So, I’m going to guess that singer/guitarist C.G., member of the excellent Black Metal combo Krater, and drummer S.E., who was the drummer of Death Metal legends Excoriate, had to put on some pressure so the album could finally be completed and released.

If I had only two words to describe “Where Voices Leave No Echo,” they would be “bold move.” I can hear the screams and complaints of all the traditionalists of orthodox extreme Metal that were expecting Horns of Domination to just bring up a longer version of their demo. Haters of good productions, abandon all hope. One has to say that the guys would have had  great success if they had played it safe, delivering pure aggression through some good riffs and noise. Instead they have made something fresher that deserves the attention of many. And that outside the stricter underground.

Principally, they have gotten rid of the crust of noise that gave their music those “trve“ aesthetics in the demo. Without it, the compositions are bare, and carry the weight of creating the atmosphere on their own. And, surprise, they have no problem doing it. If anything, cleaning up the sound has created room for more complex melodies, exciting arrangements, and unusual effects.

The cleaner production does not make this sound plastic in any way. It is massive, powerful, and dark. The aggression has not been reduced. It rather seems to come from somewhere new. The parts of the compositions that are slower, pure experimental atmosphere, give way at the right moments to outbursts of rage. The more aggressive parts shine this way more as if they were a component in a non-stop blast beat album. And the rest, that clean sound space I mentioned, is where Horns of Domination have found a place to grow and create a true sound of their own.

This is a Blackened Death Metal album, no doubt, with a few Thrash Metal elements adding some groove here and there. And it still has a lot of the old-school elements from the demo, just properly produced. The guys obviously have no fear of experimenting with sound, and know their job well enough to be able to incorporate these experiments into the main atmosphere of the album, improving it immensely.

All in all, a surprising masterpiece that really does not feel like a debut at all. It is massive, dark, individual, and yet extreme. Enjoyable on many levels, I’m convinced I’ll be playing it a lot in the future. Let’s just hope the next album won’t take six years to come out.

A special mention has to go to Alex Morsch ( @discordia.graphics ) who has really created an impressive series of paintings and designed the complete layout of the release.

Live video on Facebook: https://www.facebook.com/vorlautebaeume/videos/1113245219020355 (I made this video live with my phone when they played in 2019 – but the quality is almost decent for it being very unprofessional)