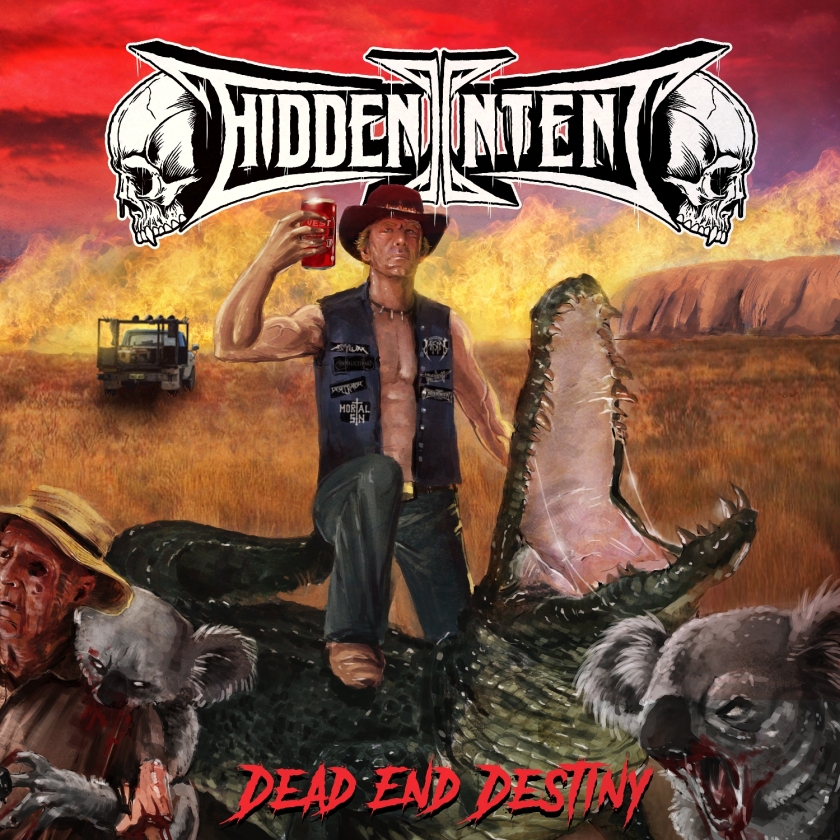 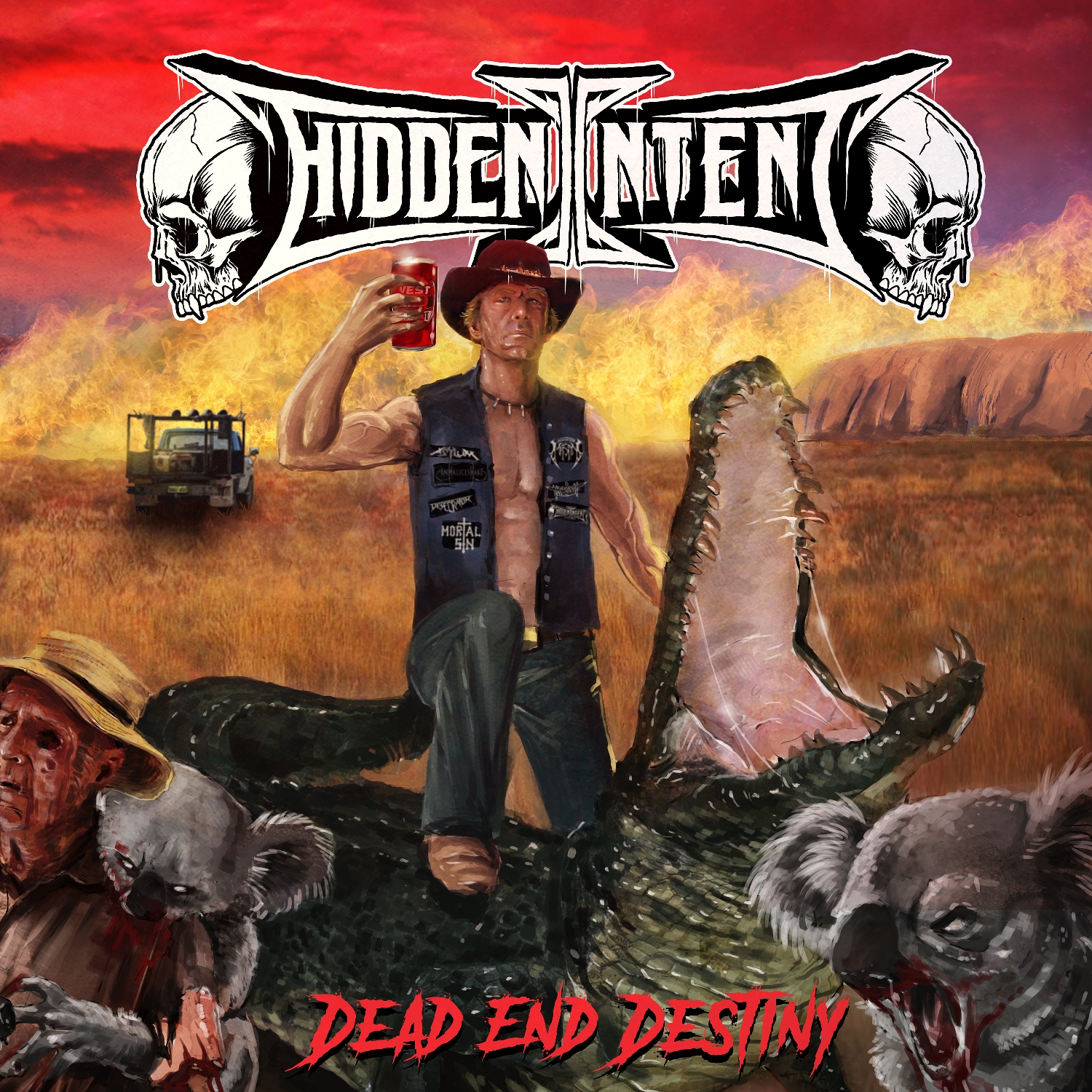 Hey SIRI, play me something Australian…

Hidden Intent out of Adelaide, South Australia bring the absolute thunder (from Down Under – sorry, Your Grouchy Friend was never going to be above that one) on their riotously brilliant new album “Dead End Destiny.” To say they express themselves in an uniquely antipodean way may be hyperbole, as there have been others for whom the projection of Australianness has been a key factor in their artistry, but as an Australian it must be said that these lads do it with a panache that made this reviewer drop a single, heartfelt tear of appreciation. From the battle-vested, croc-straddlin’ Mick Dundee resplendent on the cover art, to lyrics that simply cannot be replicated by anything less than the purest of Aussie Metalhead, this is the real deal folks. The thing about such endeavours is that they can come off as a laughable sideshow unless backed with talented musicianship, so let’s cut straight to the chase – “Dead End Destiny” is a sweetly produced, well arranged and tightly executed slab of Thrash Metal that stacks up against anything the genre has spat out.

Starting in the middle seems the optimum way to begin here – “Get A Dog Up Ya” is two minutes of Thrash done right and distils the Aussie larrikinism to its most drinkable form. It opens with staccato blasts, a classic sounding piece of ominous intro that is reconceptualised rapidly into a quick, skipping Thrash beat, then it is absolutely on for young and old. On for Robbo. On for Shazza. On for Centrelink. On for every cunt.

The Macquarie Dictionary seemed a great place to go in translating some of the beauty of this song for our worldwide readership:

get a (black) dog (up ya), Colloquial (an expression of farewell meaning, literally, `go and have a drink’.) [Phrase Origin: from the phrase the hair of the dog being the cure for a hangover, implying that the person addressed should take care of themselves by having an alcoholic drink]

The Outback Dictionary has these less formal thoughts to add:

Common way of saying “go fuck yourself,” also can be used as friendly term of endearment. It has many meanings, and so depending on the way it is said, could mean almost anything.

This ode to drinking is in my Grouchy opinion one of the best songs of the year. Further to the opening thoughts above, this would be a joke were it not such a genuinely cracking piece of Thrash Metal. Like the rest of the album, Hidden Intent absolutely nail this like a goon bag to a Hills Hoist.

There are some ripping tunes on this album, other stand outs include the titular “Dead End Destiny” featuring members of Artillery, “Breaking Point” and “We Are The End of Us.”

Each of these tracks has a classic Thrash feel coupled with an effusive personality: Two features that define the entire album. Hidden Intent know what they’re all about on their second full length and don’t shy from a winning formula. It is refreshing to have a band carve out such a specific niche and go as hard as they can in that direction – particularly in a world full of copycat mediocrity.

Just as you think things couldn’t get more Aussie, Hidden Intent regale us with a heavy cover of celebrated Australian Punk outfit The Chats’ incredibly popular tune “Pub Feed.” This fitting salute to a recent iconic Aussie band ends in what is surely an homage to Slayer’s “Raining Blood” with pounding drums over the “chilling” ambience of Aussie pub chatter. “I’m drier than a dead dingo’s donga!” This is extremely appropriate given the album’s bonus track: another cover, this time of Slayer’s “Altar of Sacrifice” to which the band more than do justice.

In summary, this is an album that is one hell of a lot of fun – hopefully fun with which our friends outside of Australia can successfully engage. All the trappings of Thrash excellence are in play here – picking and drumming precision, superbly crafted middle frequency rich guitar tones, and clinking, clanking full spectrum bass. Vocalist Chris McEwen delivers with a surprisingly nuanced balance of menace and fun, completing what really is a formidable assault. So much of the variety of Thrash Metal’s storied history can be obscured by the legacy of its dominant players, so it is worth pointing out the sense of fun that pervaded so much of the early American scene – it is that sense of fun that Hidden Intent bring unabashedly to the fore.

Get a dog up ya… and get some prime Aussie Thrash to go with it. Beer and Thrash: name a better duo… I’ll wait.