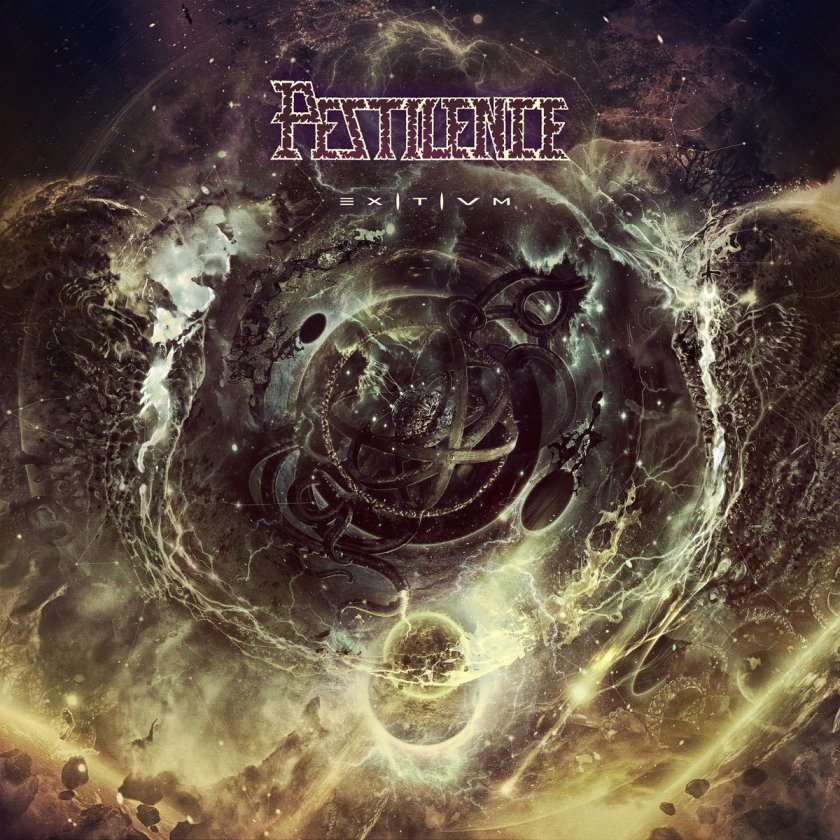 Pestilence, to simplify matters greatly, has had two eras.

1) The early Martin van Drunen-dominated era from ’84 to ’94, (with Patrick Mameli stepping up on vocals after Martin’s departure in ’90, where they delivered a Thrash-infused Death Metal sound.

2) From ’08 onwards, after a fourteen-year gap, when Patrick reformed the band and where, of late the sound has been increasingly innovative.

In both eras they have, to my mind anyhow, been at the forefront of their game, inspiring a lot of other bands. And although many people prefer their earlier sound (particularly their second album, “Consuming Impulse,” which was an utterly gnarly Death Metal assault on the senses, and an album aficionados always seem to rave over), I rather like the direction their more recent albums have taken.

Fast forward to their latest offering, “Exitivm.” The album sees Patrick as the only remaining original member, and with a fresh line-up comes a reinvigorated approach, delivering a sound which is an engaging and exhilarating meld of Old School Death Metal with a strong Prog-Death leaning. This allows for a pretty exciting infusion of a very angular, discordantly jazzy element alongside some powerful symphonic elements, all of which I absolutely love, returning somewhat to that more innovative sound of 2013’s “Obsideo.”

The aspect I like the most about the twelve track, forty minute “Exitivm” is that it isn’t trying to sound like every other Death Metal album. It wants to be unique and to stand out, and it does. That, in a nutshell, is the utter charm of this offering. It’s also so engaging, it feels shorter than it actually is! I found myself completely lost in time and mesmerized by it.

“Exitivm” opens with “In Omnibvs,” an atmospherically haunting soundscape intro that builds with cinematic style, symphonic pomp, and closes on the dark ominous searing symphonic outro of “Personatvs Mortem,” which ebbs away enough to make space for a stormy soundbite of crows, which for me ties the album up beautifully.

In between you have “Morbvs Propagationem,” which morphs out of the intro, bursting forth with those angular riffs that run a fine line between jazzy and technical. The sound is sharp and punchy, and sits so well with the raw vocals, all delivered with an unrelenting drive, smoothed slightly midway with a symphonic wave only to become more angular again as the lead work punches its way through.

“Deificvs” is reflectively haunting to open but soon becomes a dark meld of sharp, punchy, repeat riffs and haunting bursts of symphonics with more jagged lead work. “Sempiternvs” follows a similar pattern to its predecessors, but has a decidedly darker and more sinister downturn, and the midpoint leads definitely err on the edge of insanity, in a good way.

After an eerie piano and noise scape, “Internicionem” races off the starting block like an evil possessed beast, becoming a punchy repeat chugger, and the haunting symphonic supported, razor-sharp midpoint guitar cuts through you leaving you at the mercy of some of the sharpest riffs you could wish for.

“Mortifervm” made me think of something hideous crawling out of the primordial ooze as it opened, but thirty seconds in and it’s assaulting on the senses in the same brutally discordant manner as its predecessors, with hypnotically punishing intent. Add that to the addictive repeat pattern to the lyrics and you have an absolute head-spinning, winner of a track.

“Dominatvi Svbmissa” is like a repeating assault on your very being. The initial barrage of more repeating riffage, a very key element to the whole albums sound, interspersed with brief erie sighs, then when it has you were it wants you, it assaults your senses further with bursts of guitar solo that build and intensify along with entrancing riff patterns. A track which leaves you begging for more, and it arrives in the shape of “Pericvlvm Externvm,” which attacks this time with more of a spiralling assault, but there is also a very subtle melodic groove nestling beneath. Engaging the listener, and packing a punch in one foul swoop. Sensory overload at its finest.

“Exitivm” delivers all the way to the end with the final three pieces; the discordant but groovy chugger “Inficiat,” then title track which, on top of the hypnotically spiralling guitar repeat, has a superb dialogue feel to the vocals, and finally the galloping madness that is “Immortvos,” which loops and contorts with recklessly discordant abandon before dropping down in pace to crushing proportions then hitting you full on with the dramatic bursts of screaming leads that rip through.

I have no favourite tracks on “Exitivm.” It’s an end-to-end belter that will leave your mind feeling like it had an invigorating work out and a thorough cleanse. If it doesn’t, then you might have died and no one has had the nerve to tell you.