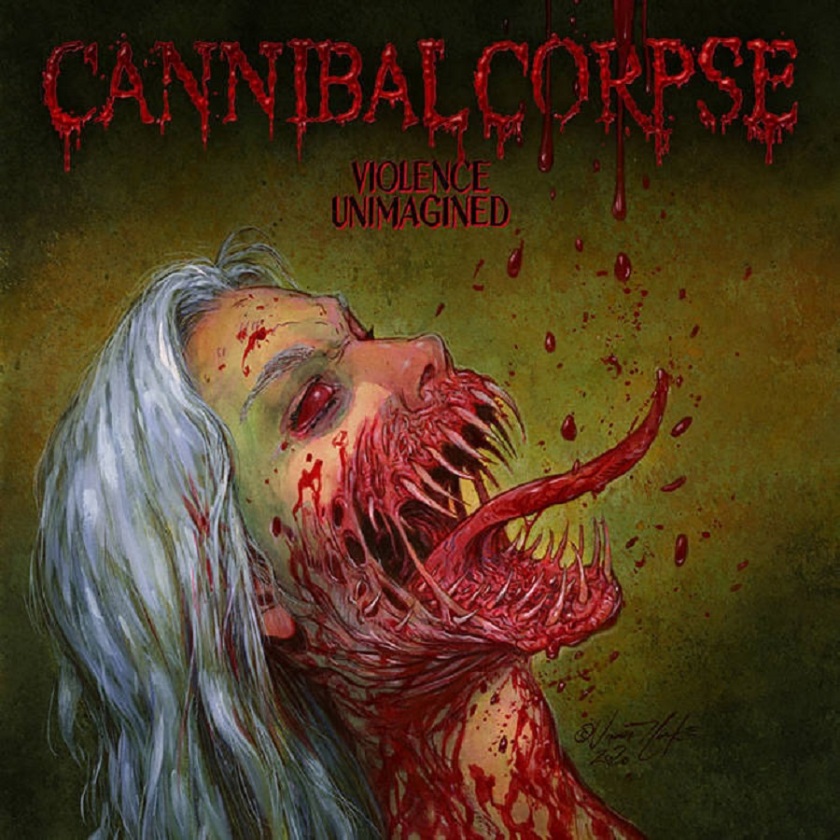 The mighty Cannibal Corpse need no introduction. They have one of the strongest careers in Death Metal to prove it and still eat any band in any musical genre alive, when they hit the stage. Yet, with the release of their latest album they are on the verge of a new beginning. Is this the classic case of the more things change, the more they stay the same? Or a big change? Or something in between?

The TMW staff had their say about this soon to be classic album:

Meddlefan: “It’s Cannibal Corpse. A few changes in some of the songs. They always have two to three great songs on every album. In the end, I own every Cannibal Corpse album and cd. Boxsets as well. They are who they are.. Big production.. Great musicians.. Great energy.”

VUK: “It is quite possible that I have played this album more times in one month than I have any other album since January. Sometimes I think “Surround, Kill, Devour” is the strongest track on the album. Then I think “Condemnation Contagion” kind of takes the top spot. “Murderous Rampage” is one hell of an opener, but “Follow the Blood”! Dude! Come on! “Cerements of the Flayed” is Death Metal perfection, but at the end of the day “Slowly Sawn” destroys everything that dares get in its way. What I’m saying here is that there is not a weak song in the bunch, and there are plenty of reasons to listen to the bastard repeatedly. This is the kind of record that could make an on-the-fence Cannibal Corpse fan fall flat on his ass, and provide ample happiness for those of us who were in need of a pick-me-up. That’s what Cannibal Corpse does. They bring people together! God bless these fucking maniacs!”

PCO: “I think having three distinctive song writers onboard now is bring a lot to the table. Making it more song oriented, that is. At least it feels like this now, when the writers all have a bit different approach. There’s the standard Cannibal Corpse style of Webster, thrash metal leanings of Barrett and the new thing, the more classical music / Morbid Angel oriented style of Rutan. This way, the album was easier to get into, than a couple of previous ones have been.”

Rotnoxnatl: “I have always held Cannibal Corpse at arm’s length, like a leaky diaper that I can’t carry to the trash can for fear of it dripping on the floor. I really don’t know why that is, since I have always been a huge fan of their cover art / artist Vince Locke because of his master creation, the comic book series Dead World. When they first hit, I just didn’t get Death Metal at all. So I kept them at bay for almost 30 years. But I’m older now, and tastes evolve and change. In the recent past as I began to explore Metal of all styles, I have finally embraced many of the “Extreme Metal” bands and genres that I shunned in my misguided youth. At the top of that list are two bands: Death. And Cannibal Corpse. While the only new music I can expect from Death are the barrage of live releases, I can revel in actual new music from the mighty CC. And revel I have. “Violence Unimagined” is nothing short of excellence. Are there any big surprises on this album? No. There are eleven pummelling tracks of glorious Death Metal, filled with killer riffs, face-melting guitar solos, and Corpsegrinder barking lyrics about murder and (what else) death. Oh, and a couple variants of cover art from the one and only Vince Locke. I may be late to the party, but I’m ready to sit down and devour some entrails.”

YourGrouchyFriend: “This album for me is like catching up with a best friend that I haven’t seen in a long time. It’s been an eternity, and honestly I’ve been a lazy friend that has drifted away and missed great chunks of my good buddy’s life achievements. The things I know and love are there and our hitherto estrangement make them seem fresher and all the more captivating – They’re why we were friends in the first place. Then there are the new layers, the new riffage and lead expression – I’m impressed by my old friend’s ability to keep things tight. There are just too many fantastic elements on this album to name. “Ritual Annihilation” takes a well worn style of riff and still makes it sound fresh and urgent, then evolves into something far greater than the sum of its parts. “Slowly Sawn” is utterly monstrous and brings to mind some of the arrangement on The Bleeding. “Overtorture” would have to be the pièce de résistance with its unstoppable intensity really hitting the spot. In terms of the vocal, Chris Rock has a great stand up bit about Prince and Michael Jackson that came to mind listening to this album. Rock talked about he and his friends arguing over who was better – MJ or the purple one – in the same way that Cannibal Corpse fans do with Corpsegrinder and Barnes. You know what? The reasons are pretty different but when you hold up Barnes’ latest atrocities to the might of

Corpsegrinder’s body of work it’s just not a conversation anymore. This album cements that fact. My memories of Barnes destroying my young mind on “The Bleeding” tour can no longer cloud things. It’s not close. Corpsegrinder delivers the goods on “Violence Unimagined” – He’s an absolute monster of the form and deserves all his accolades. This is a ripsnorter of an album folks.”

PCO: There’s the point right there. Corpsegrinder’s ability to deliver power and precision are unmatched. And this is a thing that goes with the whole institution of modern Cannibal Corpse as well. They are so monstrous, so tight, so well crafted and delivered that it’s almost paradoxical. How can you surprise people any longer, when you are the best in the game? By going worse? Luckily, they did not go for that!”

Vuk: “I think part of the answer for this can be found in Grouch’s first sentence. Like catching up with an old friend. Corpse doesn’t overload the world with material. Four albums in the last ten years. Given the “formula” they’re known for, they could churn out a turd every year, right? At the same time, it is quite telling that they’re still capable of such brutality. I have a feeling they’d hang it up if they couldn’t bring the torture anymore. Or… they’re immortal. George has ground so many corpses, he has become one himself. God bless him.”

The final words go to that idiot formerly, and still, known as The Great Mack.

“Two words. “Slowly,” and “Sawn.” If this motherfucker doesn’t kick down your shithouse and make your chooks lay a thousand eggs upon the opening riff, then you probably live in a barn in the middle of bumfuckville and listen to Gospel tunes whilst spouting the good word of the Lord. Fucking insanely heavy would be an understatement. I put this on at at a moderate level out in the backyard upon receiving a copy and watched all the grass cut itself, like any self respecting Goth on a rainy day, and witnessed a nearby tree lose limbs without an arborist in sight.

I won’t go through my list of favourite CC albums, but I will say that “A skeletal Domain” really hit all the right notes for me (the ones that make great Death Metal utterly superb of course), and then “Red Before Black” left me feeling like I had a flat tyre on a Sunday morning which I had to change otherwise I couldn’t go to the gym and work on my neck muscles (yes Mr. Fisher, we know you where born that way, but some of us have to put effort into being uber cool.) So when news this one was coming out I was up and down like a Meerkat that can smell Hyena on the wind.. Will it be good? Oh! Erik Rutan has joined the band full time! Will this make things better or ruin it? Why does cheese rhyme with knees? I assume you get my drift.

Well, the news is in. As you can see from the above comments from my fellow TMWians, this album is a right fucking punch in the testicles, and an elbow to the kidney region, followed by a phone call from the police saying your mother is dead in a ditch and she had your birthday present in her arms as she carked it. Sure, it’s Cannibal Corpse all over, but having Rutan join the band full time seems to have given an already outrageously fucking awesome band MORE of an edge if that is even humanly possible. Not one track on this thing could be considered a runt or the weakling of the litter, as they all seem to be horribly intent on rearranging not only your furniture, but also your face.

All that remains to be said is this. Cannibal Corpse continue to prove that you CAN teach and old pony an new trick or two, and this fucker contains way more ammo and firepower than even their old guitarist had stashed away in his house. No disrespect here, the man had some issues, and we love him for his solid work over the years, but the lads here have made flamethrowers and grenades (and Panzer tanks, B-52’s, Mike Tyson’s chin etc.) look piss weak in comparison compared to the destructive power contained within the stuff on display here. “Violence Unimagined“? Well, we knew it was coming, but did we expect such magnificence? All hail the mighty Corpse, may they continue to solidly rodger us for ever more!”