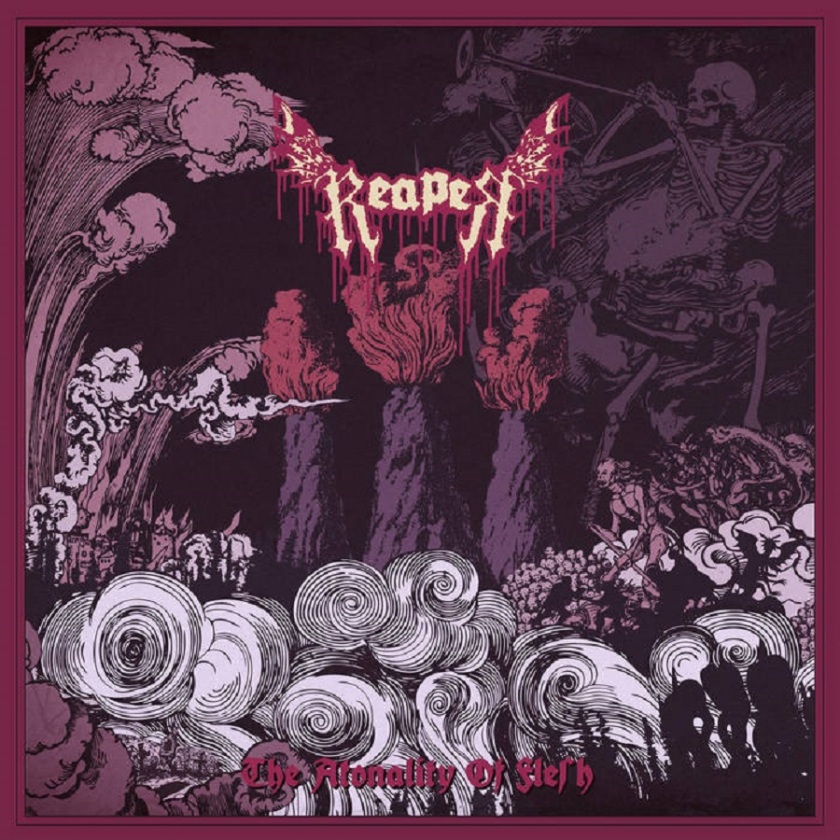 REAPER – THE ATONALITY OF FLESH

The Metal Wanderlust headquarters (c.) is a bizarre place. Connected by tunnels, towers and half-buried by the emptied tin cans of our brother AstronautGuy. It is a place where the like-minded Metal fanatics from around the globe meet and discuss, well, Metal of course. This was the case with Obsolete Dreadnought and ProgCaveOgier too, when they sat down for a couple of pints to go through the case of “The Atonality of Flesh,” the highly anticipated return of mystical Swedes Reaper. Whereas the debut album of theirs, “Unholy Nordic Noise,” was the most important case of punkish Bathory worship in the past five years or so, they did not waste any extra time, and unleashed the second album pretty soon after the debut had shattered the collective eardrums of OD (no pun intended bro, but damn! Haha!) and the PCO.

Both Nordic noise fanatics were pretty eager to talk about it.

OD: “I’ve been playing it a lot. The song writing is top notch, but I’m not yet sure what to think about it. Somehow, they seem to have wanted to make it noisier and more Punk than the album before. They have put a lot more noise in the mix, and some weird drum lines too. It is surely unique, but is it better?  And it is funny that they use the story of the torture and death of Robert-François Damiens after his attempt to kill Louis XV in 1757. It is a bit as if they have dedicated it to me.” (OD’s name is Damien, you see – Ed)

PCO: “Hahaha!! The intro is indeed memorable. There’s also a lot more melodic moments that jump up, when compared to the very straightforward debut album. The problem might be that the melodies themselves are not that fantastic. They sure seem take something out of the effectiveness they had with “Unholy Nordic Noise.” It feels a bit like we have the quite typical second album problem on our hands here. Maybe there was the need to rush out another release after a successful debut and also the need to be a bit different. This is actually a bit disappointing, as I really liked the debut for what it was. Also, the songs on that one had maybe been put together over more time. A bit more naturally, if you wish. This album is not bad, far from it, but this somehow fails to capture me like the debut did.”

OD: “I’ve been playing it on heavy rotation while working and I think you are really onto something with the second album syndrome. These guys are obviously no Kvelertak who burned everything that was amazing about them on their first album and have been releasing records since that are very good, but not half as good as their magical debut. I think Reaper have just taken the awesome ideas they had in the first album and tried to perfect them with a more technical/melodic approach. I think that they have intentionally used a dirtier sound in the final mix, so the album will not sound too “typically Swedish”. I’m still not certain if this works better than in the first album, though. But after not listening to anything else for two days in a row, I can say that this is a very effective album. Damn, I’m lucky I can do this in home office. My colleagues at work would not love to listen to this all day!”

PCO: “As far as the songs go, “Come Nature, Come Cruelty, Come Death” is my personal favourite at the moment. It’s also one of the tracks that is closest in my opinion to the mindset of the debut, with all the straightforward bulldozering associated.”

OD: “Indeed. The LP arrived this evening by the way. The edition is pretty nice, matt finish cover on a thick cover, printed inlay. What I don’t understand is why Iron Bonehead still press their albums on 140 gr vinyl instead of 180. Given the rather noisy nature of their releases, it’s not that much of a loss, but their LP’s feel thin by today’s standards. Or is this just me being a nerd. I guess they save some money this way, or maybe they think it keeps their releases underground-ish. At least their albums are comparably cheap. Let me listen to the record on vinyl a bit and give you my opinion on the sound.”

OD: “Interesting. The first few songs confirm what I thought: the dirty production that sounded a bit weird to me in the promo mp3’s, sounds much more natural on vinyl. The sound seems to have more depth. And, yeah, I think you are right: “Come Nature, come, Cruelty, come Death” is definitively the best introduction to the album. Do you know anything about the musicians? I’m not sure if they have ever been active in other bands. What they do is quite impressive, if they are basically newbies.”

PCO: “Don’t know much about them, so they indeed might be quite new to the business.”

OD: “Interesting… They have nevertheless a rather unique sound, despite the fact that they are not reinventing the wheel. It is dirty, punkish Black-Thrash Metal. Maybe you can throw some light on what makes them like that?”

PCO: “Supposedly, they take the key aspects of their favourite things, like Venom in the beginning of their career did, and mould something of their own out of it. There’s the D-beat Punk Swedes love, a bit of Bathory and a bit of Nifelheim. The rawness of early German Thrash. Nothing is new per se, but the mix is unapologizing and most of all – sounding very fresh!”

OD: “That is actually what surprises me the most. There are few bands that manage to make something that sounds fresh, in a scene that is old and ruled by a quite a strict orthodoxy, like the Black-Thrash one. Reaper definitively do that.”

PCO: “Yeah. I believe it’s the addition of Discharge in the mix that breaks the orthodoxy of it. Makes it a bit more like something unheard of, not just the plain first wave Black Metal worship we get occasionally. And besides, Bathory too were highly inspired by Punk and Hardcore. A fact most of the Black Metal maniacs often forget about. Another song I would really like to comment on would be “Me, You and the Juices of Death.” It somehow sums this album up all in micro-size. The more you listen to it, the more you discover details under the noisy surface. In the case of this song, there lies a tasty little early Metallica influence there that really popped up after a listen or six. Did you notice It?”

OD: “Metallica?! Let me put the record on again and check it… Hmmm. Interesting. I guess it makes sense you noticed it – you being more of a Metallica fan than I am. I love the bell-like line that goes through that song. Actually, what you say may actually be what makes Reaper stand out from among other similar bands – All the details and unusual sounds and lines, that one may discover under the thick crust of sonic dirt that covers the music. Normally, punkish Thrash Metal is not the music that needs to grow on you. It is more a love it or hate it around the first listen. These guys are more complex than most of their peers and they have kept going in that direction with this album. I liked it less than the previous one when I started listening to it, but it is really changing. Actually, my opinion has changed quite a lot since. And for the better.”

PCO: “This album sure is opening up after some peeling!”

OD: “Launching a second album so fast is not always a good idea, but Reaper have done great work here. Without sounding too different from their first one, it most definitively is an improvement to their sound. The improvement makes nevertheless their individual sound a bit more inaccessible, so I do recommend giving it a couple of spins before judging it. By any means, this is a great album if you like some Swedish in your Black/Thrash Metal. By Swedish I mean both – Melodic and D-beat Punk elements. Reaper are a young, but quite a unique band that is already doing great things.”

PCO: “Absolutely. Don’t sleep on these guys folks, not now when they are still fresh in the game. Even though this sophomore release of theirs might not be the unstoppable rampage the debut album was, I still have spent quite a lot of time on this release nevertheless. It sure is noisy, it sure is Punky, but there are tons of details and twists in the plot to make it more than the one-trick ponies you usually get in this genre. It is a good, solid record, but I cannot help myself feeling a bit disappointed too. If you compare it to “Out Raising Hell,” a killer album from another Metal/D-beat combo from Sweden, namely Paranoid, one can sure tell that the latest Reaper is the less energetic of the two. BUT, this album is far from weak. Not just the instant classic the debut was and despite what I just said, it will be in my list of most listened Metal albums this year for sure. Reaper have made me a fan of their noise and “The Atonality of Flesh” did not scare me away from their possibilities of life’s destruction. This time, I’m just a bit more fan of their sound and direction than the tunes.”