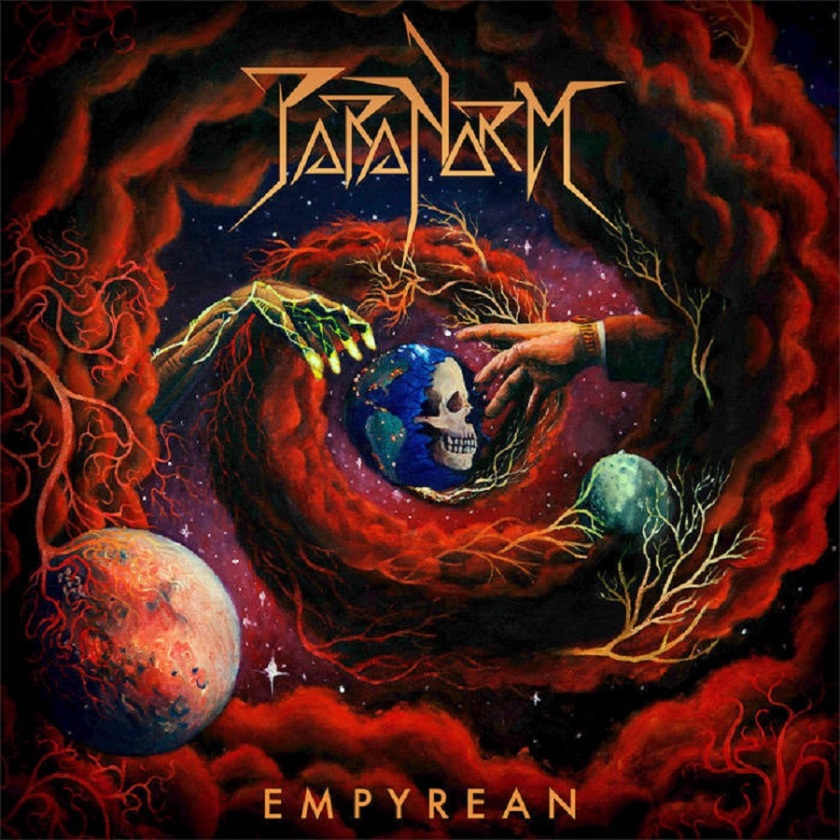 It’s always an exciting moment when something fresh and a little different passes my way, and Swedish Progressive Thrash Metal quartet Paranorm is one such band. I’ll also hold my hands up and say Progressive Thrash is a new concept for me, I suspect it’s a rare occurrence, they aren’t genres that I would naturally put together and certainly nothing of that nature has ever passed the rock that I obviously live under….until now and I welcome this freakish beast with open arms and say from the offset, I bloody love it!!

This particular concept was conjured in the minds of three of the members whilst still at school out of a love for similar music, something I’m grateful for and twelve years or so later following a demo, a couple of EPs “Pandemonium’s Rise” in 2011 and “The Edge of Existence” in 2014 plus two recent singles, both of which feature on this, their debut studio full length, the eight track, fifty-four minute “Empyrean” which has just been unleashed upon the world and it is so good the first pressing has all but sold out, but fear not, a second chance will be had soon, more details at the end of the review.

At the heart of “Empyrean” is a Thrash core with harsh acerbic vocals which are at the same time clear in their delivery of content and I think what makes this work so well is that the technical edge is more apparent than the progressive one, the progressive quality is like the glue which fixes the pieces together. Then, we have the shreds which are so complex, so flamboyant and so fascinating they’d make Yngwie Malmsteen jealous and they are everywhere. Popping up like weeds, they are so abundant, as well as being utterly breath-taking in their complexity, Paranorm are running rings around most Thrash bands with this album and even though there is that technical aspect to the sound it still manages to be catchy as hell.

Most of the album is a full-on experience but they do pare it back a little in places, as on  “The Immortal Generation,” one of the previously released singles, it is melodic yet technical to open but it doesn’t take long before you find yourself in full tilt Thrash territory, they hold back a little, delivering a succession of technical melodic bursts to break it up but the shreds break through by the second half and with the track “Edge of the Horizon” they almost fool you. It’s melodic and reflective to open with a gentle build, which extends for a minute and a half then, Bam! Straight into a technical Thrash-fest, but considering this track is a nine-minute monster, they do need to pace themselves, so it’s slightly slower in comparison, but not by much. However there is no shortage of shreds and technical elements particularly in the second half, it’s one of three tracks which passes the eight-minute mark but long or short they still all manage to keep your interest. There’s no filler, this is an album that is utterly engaging and catchy end to end, it keeps you guessing as to where it will go next.

“Empyrean,” another of the longer tracks also pares it back a little in places but with an added sinister air and has a bafflingly good convoluted quality which flits around with impressive deftness that, whilst you are, by now, used to it, you still find yourself marvelling at because you really can’t predict its route at all.