Meddlefan recently had a few words with Leeds, UK based two piece Psychedelic Doom Metal band Amon Acid. Never heard of them? Do yourself a favour and check out their latest release “Paradigm Shift” right now and then you will see these words in a very different light! Anyway, away we go!

Hi Rob, thank you again for asking us to do the interview – we’re really psyched about this!

Care to tell the faithful who they are reading about today?

Excellent! Where did you fine folk grow up if we may ask!

In Andromeda – we were kidnapped by future humans but we escaped by building a time machine that allowed us to travel back in time via a different dimension. When we reached 2018 the time machine broke and we remodelled it into a pedal board – we’re hoping someday that our music will reach our hometime/dimension as a warning about our current situation – they’re probably better trying a different dimension or at least a different period – we’d recommend the 60/70s counter culture.

And where do you live now?

Leeds, UK, it always raining but its been the home of some great music. The DIY scene here has always had an influence on underground bands and vice versa. 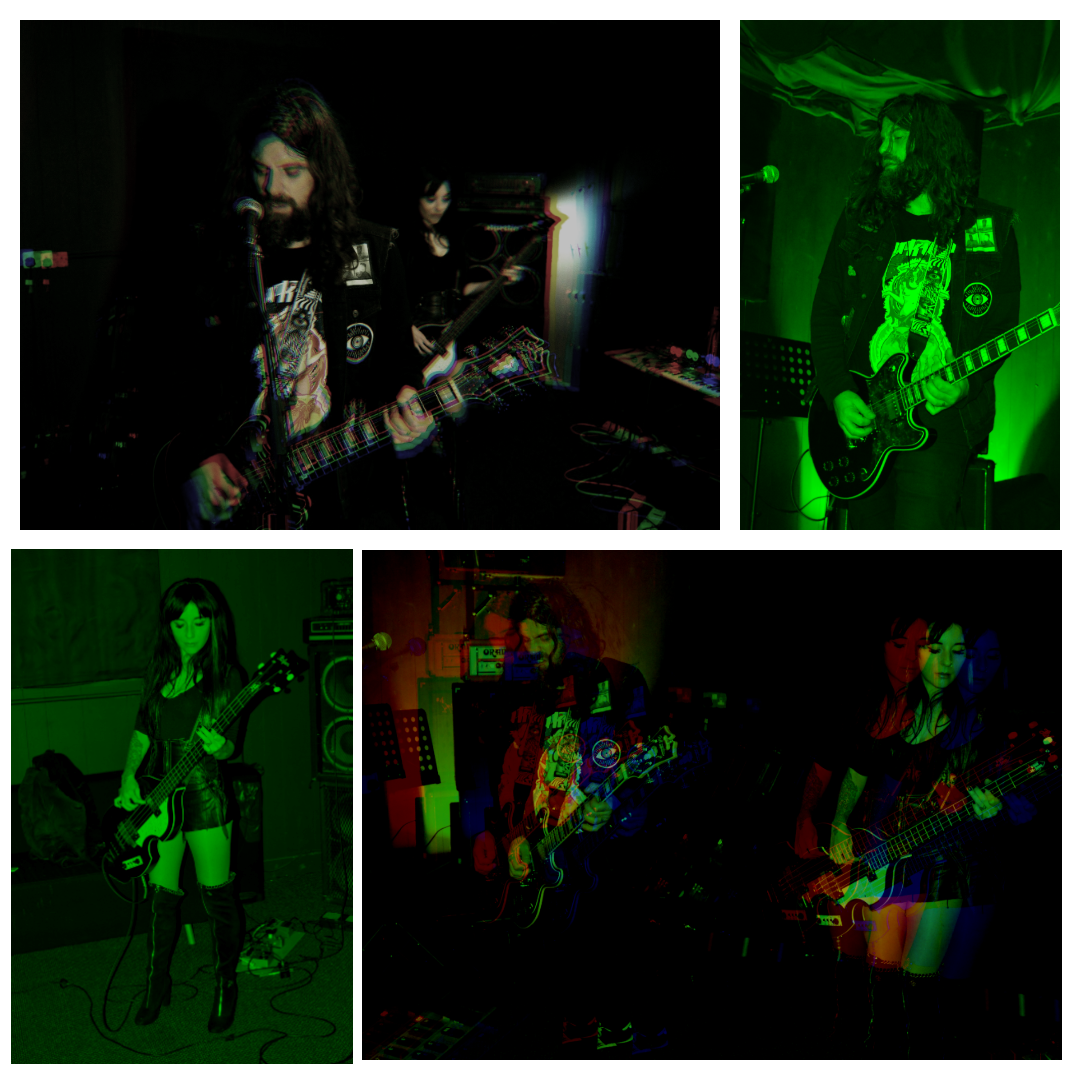 How did you meet and start making music together?

In our current forms we ‘met’ in 2018 – after crash landing with extra-terrestrial rebel groups in liberated trans dimensional pods somewhere outside Leeds.

B: Sarantis has made music in a lot of different dimensions in the past – when we landed here we decided the only way to support the rebellion back home was to transmit counter intelligence through music. One of the greatest things about this dimension is the music and anything psychedelic reminds us of home in outer space.

What are your biggest influences when creating music?

We try to use  ideas from the collective imagination of this dimension that overlap with the reality of the future in our galaxy. Sci-fi, horror movies and stories – sometimes the world around us makes us use this source material as metaphors for our communications. The sound of our music is inspired by the 60s / 70s from India to the USA, during this time it seems like earth people were pushing boundaries in a chilled out way and big shifts in reality really seemed possible. We also connect with any kind of outlaw music – it makes us feel part of a community.

Do you have any other projects you are in?

Sarantis has a more traditional doom project called Outer Head with some fellow temporal travellers. Briony occasionally does some collaborations with the wyrd folks of Hawthonn.

Do any of you skate?

No – but we enjoy playing Tony Hawks 2 and there are some cool old school hardcore songs on the soundtrack. 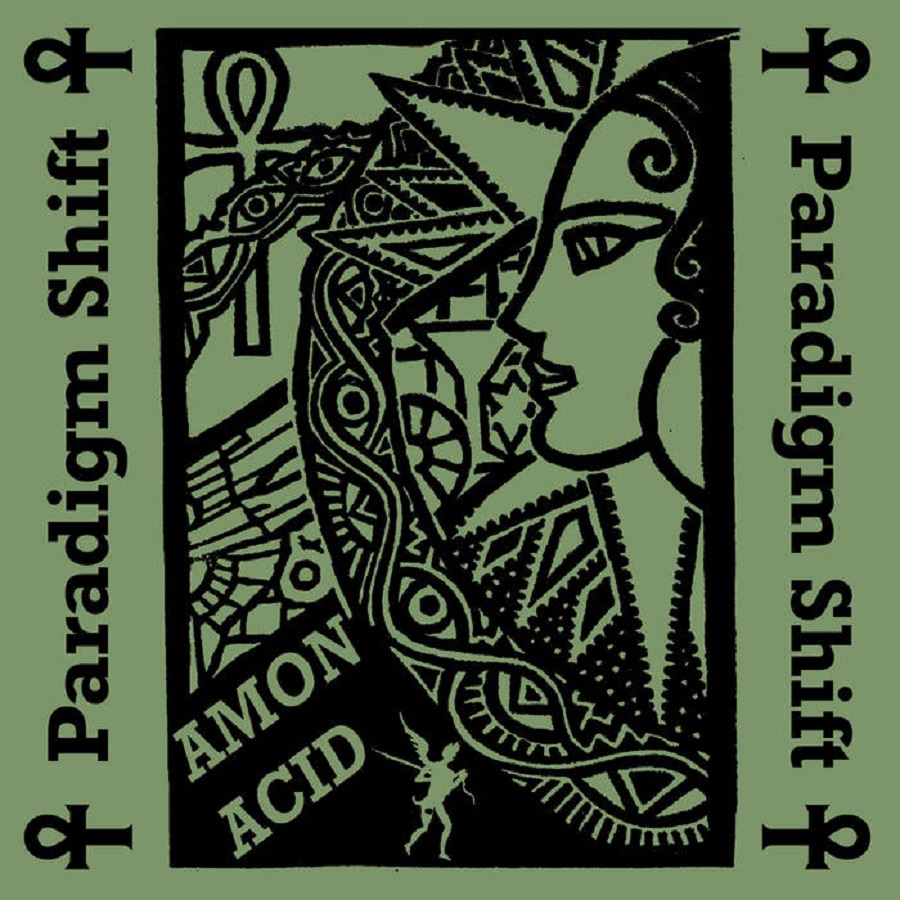 What are some of your favourite foods?

Do you like science fiction or fantasy more? Books or movies?

We really like fantasy – the Conan comics and the first film is one of our favourites. The difficulty with fantasy is a lot of the movies are lacking – we don’t mind cheesy b-movie stuff but finding a good sword and sandals film isn’t easy. Red Sonja is visually stunning but loses our focus quite quickly. We recently watched Sorceress – the ending is super trippy. Good sci-fi films are much easier to find and they are our default choice other than horror films. In terms of sci-fi books we don’t read a whole lot of novels but we will often turn to authors like Arthur C Clarke and Philip K Dick for inspiration. Stanislaw Lem is the master of the sci-fi short story and we always have a copy of the Cyberiad to hand.

Do any of you have cool collections?

Not really – we like to travel light – we have records, dvds and comics at home but we’re not collectors.

How did you come up with the band name?

Amon Acid – it’s the intersection of spirituality and science, inside of both there is a code that humanity cannot crack because they exist outside the boundaries of this dimension. There is no human language able to describe the fluctuating patterns that link the future and the past, the closest word you have is chaos. Also – if you say Amon Acid really fast it sounds like I’m on acid which we found really funny.

Can you tell us a little about the process you use when writing your music?

This is something that has gradually changed and evolved over the last couple of years – we really try to focus on being able to do everything that is in the recordings live and this really dictates how we write music. Most times we begin with a guitar riff but a few times  a song might begin from programming sounds on a synth or a synth pedal. Sarantis usually will spend some time making drone and psychedelic sounds and sometimes those will be the inspiration for a new tune. We listen to music from a lot of different sources so even though we have a certain style we try to tweak it for different releases.

Favourite horror writer and or movies?

It’s so hard to pick favourites because we watch so many horror films. We love old 60s/70s italian horror films but at the same time enjoy a cheesy 80s horror film too. There is a resurgence at the moment in great horror films after a long period of disappointment. Mandy was really a big surprise, it’s an amazing film and Nicolas Cage pulled it off – on that note we loved a colour out of space – Lovecraftian horror / sci-fi is basically everything we are about. Unfortunately Lovecraft’s personal history and beliefs are off putting. John Connelly is one of our favourite horror writers and his short story midnight meat train turned us on to the splatterpunks compilations.

What are some of your hobbies?

Last one. When are you planning on releasing some new music?

We are currently recording our next full length album, this one will be a little different as we are working with a real drummer (with Covid restrictions it means recording is taking a bit longer than usual but we are really excited about this development. We tend to put out an E.P. followed by a longer album on a similar theme and this new one is closer to “Paradigm Shift” in terms of sound and style.

So, there you have it. Short, filled with wonder and not at all strange. Hahaha. Ah Meddlefan, we love your work, and Amon Acid, we love you too! Follow the links below for more!