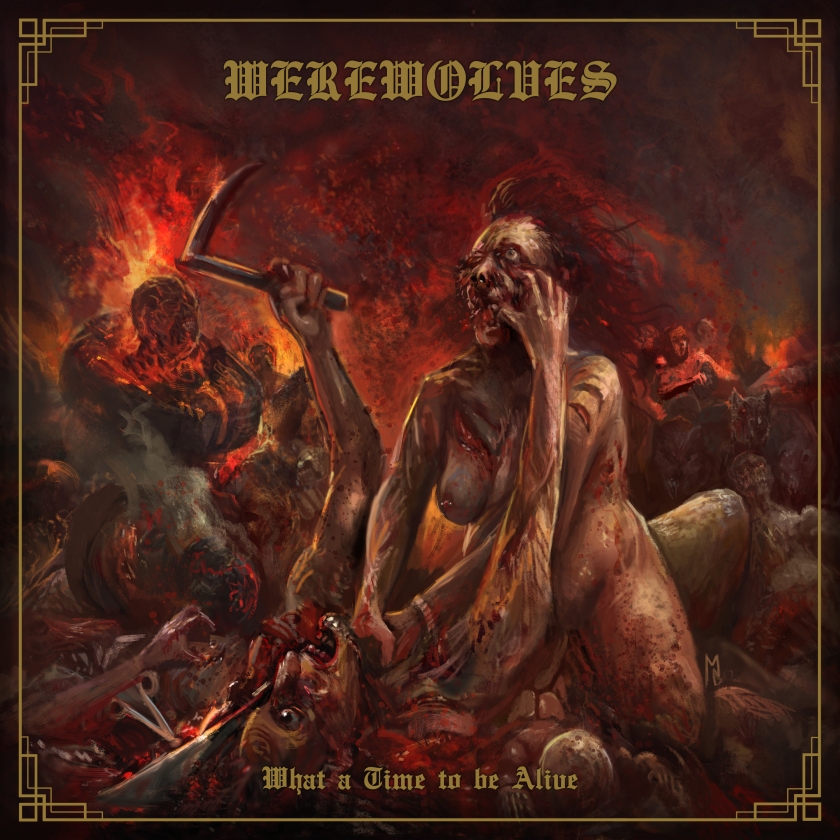 Ferocity: savage, unfettered ferocity. Like the lycanthropically afflicted beasts for whom they’re named, Melbourne, Australia’s Werewolves dealt in this commodity on their 2020 debut “The Dead Are Screaming.” With their about to be released second album “What a Time to be Alive” they have upped the ante to slavering, foaming, bloodthirsty levels. If your 2021 needs a dose of barbarous, immediate Death Metal look no further. This is pure, no posturing wank, no shit-cunts allowed, no nonsense, belligerent Aussie Death Metal: it’s coming for your jugular and if you survive the onslaught, come next full moon you’ll be counted among the pack… or you’ll be counted among the fucking dead.

The whole album feels reactionary in a way that may well define 2021 as bands’ writing processes most directly owing genesis to the extraordinary shit-show that was 2020 bear fruit. The attitude and emotion could be felt as last year’s releases hit, but it is the music released in 2021 that will have been written in isolation, sickness, fear, seething anger, insanity or whatever malfeasance the human brain produced in response to all those fun times we had last year.

In true Werewolves style, “What a Time to be Alive” is lyrically direct, with an emphasis on the kind of exquisite profanity in which Australians revel. Your Grouchy Friend loves the written word in its specific and well formed glory, but he also loves fucking direct, no bullshit messaging – “I Don’t Like You” is a vicious lyrical attack: simple, honest and unyielding. From the outset there is little doubt what the listener is in for, and it certainly isn’t for the faint of heart.

Production wise, something that strikes home hard in the breakdown section just over two minutes in is a guitar midrange that is particularly Thrash-like and adds a great definition to the overall sound, clearing significant space for the bass to do its work. The bass rhythm forges a push and pull and an improved space within the chaos where the drums are allowed to dominate. This certainly feels like an improved mix from their debut to these Grouchy ears – there is a far more present high frequency range giving air to the bass and slicing cut to the cymbals. There is more than sufficient subtle alteration throughout – “Sublime Wartime Voyeurism” has a deliciously artful breakdown and middle section – the guitar tone noticeably shifts to create a cinematic passage that drifts through the song’s third quarter before resolving to a final bludgeoning coda. 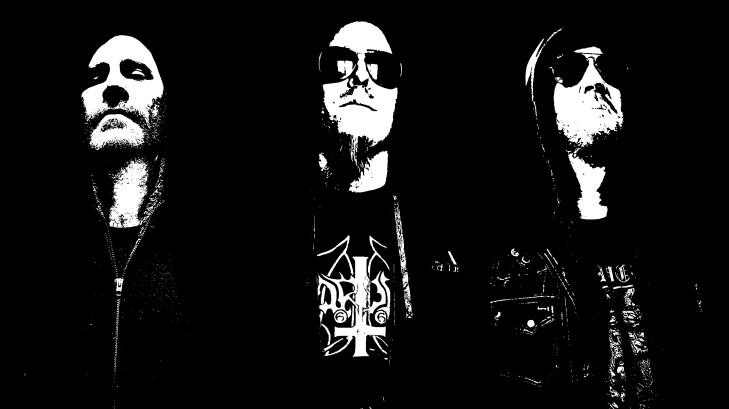 “Mission Statement” brings some stylistic flair, erupting several times into an ascending hardcore styled motif before riding a short breakdown into a stomping chanted passage that is utterly irresistible. It all happens so quickly and there just isn’t time to blink or smell the corpses before the first of a couple of delightfully crude dialogue samples calls time on this insane game.

“Crushgasm” – last of the advance singles leading up to the full album release – is a masterpiece. The key patterns involve tremolo picked melody in the most delicious of old school tradition (a big feature of the record), and rapid, blackened chordal work over blasting, enormous drums. The album title repeated as hook as the song closes is top-notch and a high point of the proceedings. Again this song just explodes in frenzied brutality and is over before you have a full understanding of what hit you. In a world of overwrought Metal technicality this immediacy is sumptuous. Immediacy is a word thrown around a lot (admittedly by this reviewer) but “What a Time to be Alive” truly feels not-overworked in the most beautiful way. The album comes very rapidly after last year’s “The Dead are Screaming” and in all honesty feels a piece built of more direct expression. This adds an almost hardcore feel to some sections – which many forget had a serious presence in many strains of early Death Metal – with the incredible energy that can bring.

The band have been described in blackened death parlance and there is undoubtedly a measure of accuracy to that description, but to Your Grouchy Friend there are parts of this album where the vocal duality calls to mind the filthy, sickened, two-tone trade offs of early Carcass. The musical environment evokes somewhat the grind-to-death era of the Liverpudlians. There are also some great Thrash-Death explorations as far as the guitar work goes: lighting fast muted chugging in delicious patterns that are greatly assisted by the mid heavy guitars. Werewolves are a cross bred mongrel that affords all the enjoyment your leg gets as that mutt fucks away unceasingly.

Top tracks? “Unfathomably Fucked” is a spectacular exemplar of the muzzles off, attack dog approach of this album. Its breakdown is pure chugging menace and the movement that follows is a ringing arpeggiated breath of air the likes of which are few and far between on the album. But it is “Traitors and Bastards”– arguably the best track – that takes the cake for this writer. The intro (and first verse) guitar is a subtle textural shift that sets up a song that builds in intensity with each passing section producing great pacing and arrangement. It contains some of the most direct and quintessentially Australian lyrics (“Useless sack of wank, where’s your spine?”) among the relentlessly confrontational fare on offer… and to top it all off a felicitous, killer quote from wild Tom Hardy film Bronson. Although it must be said that the warning “…now hang on to your fillings, alright, cause it’s gonna get fucking lary” feels twenty-something minutes too late given the bludgeoning the listener has endured to this point. Lary passed us some time back.

The album perhaps fittingly closes with some of the more pace-varied and considered of the arrangements on the album. Even a frenzied album of some 35 minutes requires a sense of journey, and it is hard not to think of Slayer after forming such a thought. Their earlier work carried similar speed and aggression that typically climaxed in a slightly lengthier and more restrained form: both “A Plague on All Your Houses” and “They Will Pay With Their Own Blood” fit this aesthetic and deliver us in style to the end of what is a fantastic album.

In conversation with The Great Mackintosh last year Your Grouchy Friend made the point that he doesn’t need to be technically impressed, he doesn’t give a flying fuck about your fifteen-hyphen-genre-mashup: he just wants to be fucking MOVED. Well unpack the cutlery, clear the packing boxes and serve the floor meal because you can count him fucking moved. “What a Time to be Alive” is a direct and refreshing piece of brutality that will get your head banging and the urge to mosh and scream along surging in your veins. Werewolves have ruthlessly attacked 2021 and staked an early claim on its blood soaked ground – get some of this… you will not be disappointed.