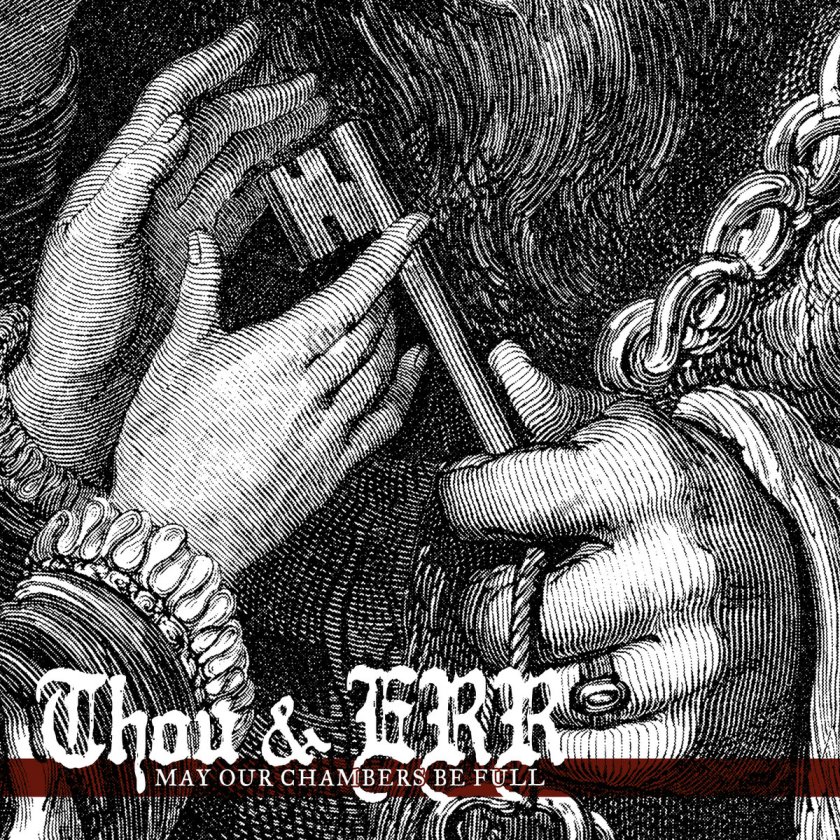 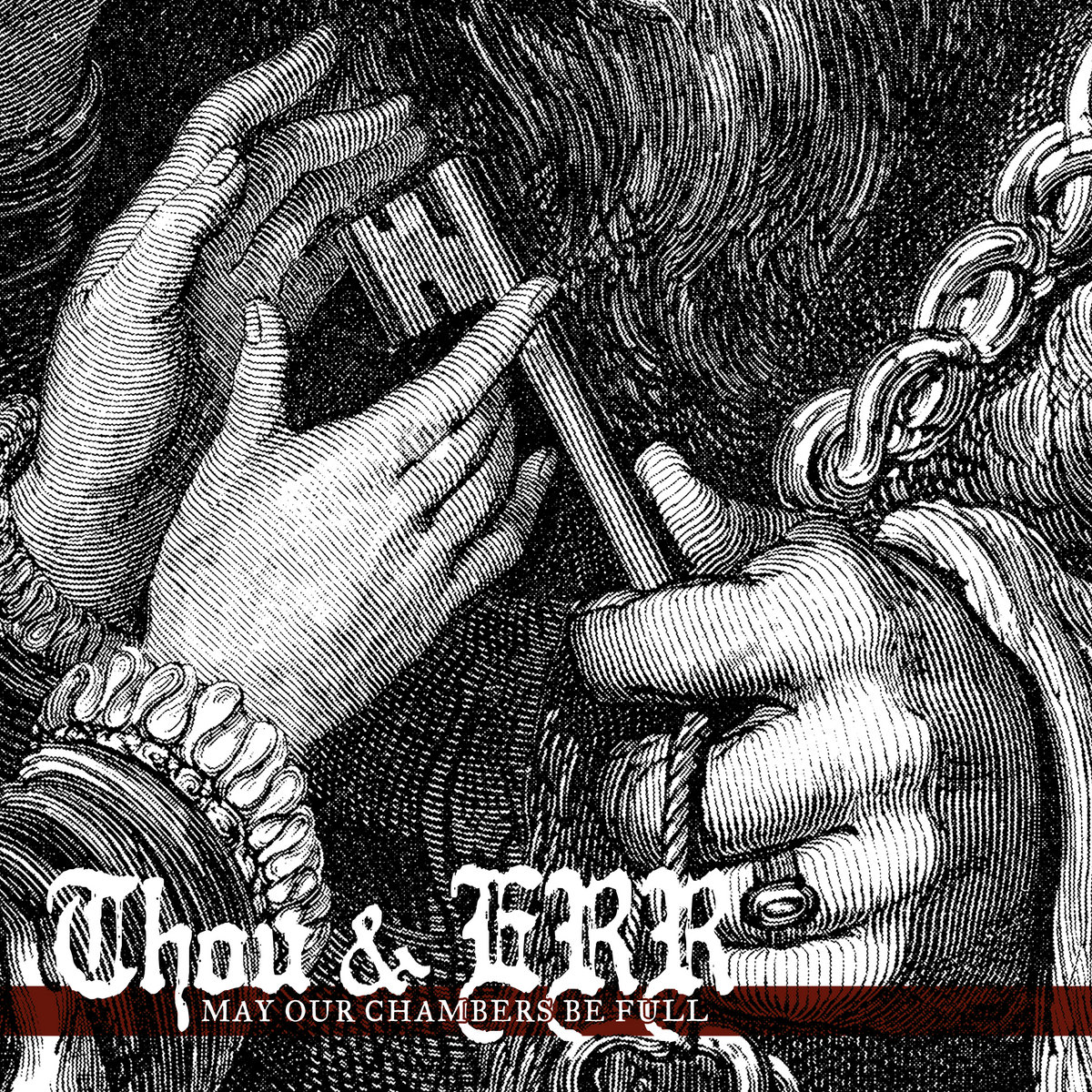 “May Our Chambers Be Full” is the album I was anticipating the most this year. Louisiana Sludge icon Thou has joined forces with the ethereal Emma Ruth Rundle to create an impassioned and ineffably beautiful masterpiece. Thou is Doom-laden Hardcore Grunge Metal. Emma Ruth Rundle has four solo albums of her own that can be described as Ambient Dark-folk/Rock, but may also be known from groups like Marriages, Red Sparowes, and the nocturnes. After playing shows together many times throughout the past few years, an album that combines these two artists feels right and makes sense despite the separate entities being so different in sound.

Thou and Emma Ruth Rundle separately have emotion-stirring and thought-provoking lyrics, so it’s without surprise that “May Our Chambers Be Full” is brimming with poetic imagery of being found “on the bridge in Dresden, naked with Eris, stripped of adornment,” or kneeling “at the base of our monolith,” and praying “its faceless grey plains choose blindness.” These 7 songs contain fuzzed out bass reminiscent of classic Grunge anthems merging with cleanly plucked guitar and the thundering of the drums. The first track, “Killing Floor,” opens with an atmospheric droning and warm echoes of the electric guitar that melt into Rundle’s clean vocals floating atop Bryan Funck’s lowered growls. The sound is massive, and the tone is hauntingly melancholic. Rundle sings,

“A heart so hollow can still rise,

Can rise up from your sin.”

This track feels hopeful like a well-needed hug, but also has an edge of sternness like someone pulling you by your wrists from where you lie on the ground.

“I feel like we have revived you once before.

I ask that you make room on the killing floor.”

The gentle-swaying melody unfurls like a slow wind across the Elysian fields being sung about. The tones are rich, resonant, and so beautiful. This portion of the song (around the 4:00 mark) makes my heart just ache. The lyrics are an emotional appeal:

I can taste Elysian Fields.”

The tone hits so many varying emotions at once – it’s hopeful, tragic, heart-wrenching. The vocals that can be heard in the background are faint behind the ringing instruments, but ever so uplifting. The song closes out the song with layers of reverb and retching growls. The second track, “Monolith,” starts with pounding drums and sludge-riddled riffs – a pinch more rocking than the song before. The guitars constantly climb up and down through a tangle of thick noise. The opening line:

“Perception colored by death of a loved one, of a friend.”

The background vocals and the smooth-swaying bass call to mind something familiar (the 90s?), but a definition is just out of reach. Third track, “Out of Existence,” begins immediately with Rundle’s voice. The guitar chugs along with a tone like a bell, and screams pierce through the sludge. The riff chugs along in measured tread. There’s a quiet guitar solo with ambient guitar softly played in the background. The bassline gently rocks along and the drums crash like small waves. Rundle’s voice comes back in and then more screams. “Ancestral Recall” is the fourth track, and the first single released from the album back in August. This song captures the tone of the album well – it’s catchy, heavy, and immediately impactful.

The scream bleeds through after the first line sung, followed by marching drums and swirling riffs that circle around what sounds like the most spacious room. Track five, “Magickal Cost,” starts with notes that ring out so wonderfully deeply. Rundle‘s voice fits well with heavier tones swirling around her. There’s a rush into heaviness, and screams appear with a wall of oppressive tones behind the vocals. The drums are delightfully powerful here, and the multiple layers of vocals singing, “my voice, reaching back,” are oh, so spectacular. On the next song, “Into Being,” the warmth of the guitar tone slides through the darkness of the words sombrely sung by Rundle. The drums pound and then instruments come in.

“Golden were the apples of desire,

A hope there was something more to taste.

The senses only liars in the pale light

False companions who have nothing more to say.”

The guitars climb up and down, following the vocal line in the most satisfying manner. It is sheer perfection when multiple voices overlap and sing,

“When will it all end?

It all just ends.”

The song ends in distortion over the consistent bassline and drums. The final track, “The Valley,” was the second single released into the world, and despite it being at the end of the album, it is without a doubt the emotional peak. This track is 9 minutes of jarring emotion, heartfelt lyrics, and palpable longing from the musicians. It opens up with that same sense of atmospheric warmth that connects all of the songs, and strings and guitars melt with slow-paced drums. Rundle starts singing,

“Circle down to the mouth of the valley

Kneel now down at the face, at the gate

As every footfall crumbles so fast beneath me

Under the weight of this Eternal Shame

And to you who’ve given up in the Valley

And to you who’ve given all to its wake

Just another grey landscape to face”

The guitars pluck along, gradually getting heavier and quicker.

“Where mothers failed to carry all their weight,

An unexpected dip in notes. The tone of the bass is ultra heavy. The drums build up. There are howling vocals in the background swirling with the guitar tones. A powerful line sung:

Then the song gains the most vigorous and spirited musical momentum as it inches toward its climax.

All those who have fallen

a tower of failures,

so twisted and vile.

You see them there?

Get them out of my way.”

The song grows heavier and Funck’s vocals are added. The song ends with the instruments gradually dropping out, leaving the strings and mellow plucked guitar and bass to echo out. This track is so beautiful and so full of heartache.

“May Our Chambers Be Full“ is such a wonderful gem of an album combining two solid artists and their individual crafts. I can only hope more comes from the two in the future, but for now I will be listening to this album on an endless loop while circling into the gaping void of the unknown and uneasy future.

If the Alice In Chains’ E.P.s were injected with Sludge Metal and the melancholy was turned up to 100%, then you’d get this album. I cannot recommend this enough, and I cannot even choose a favourite song because they are all truly so, so, so good. It’s the hug all of us socially-distanced individuals are absolutely craving.