The ProgCaveOgier was out strolling in the forest one morning, and ran into an old friend, that being Rami from Finnish Death Metal stalwarts Convulse. They had a bit of a chat, and a passing Squirrel found it rather intriguing and decided to jot it down on a piece of bark from a nearby Spruce tree. The PCO then sent us said piece of bark, and we liked what we read, and obviously decided to publish it. The writing, not the bark, as bark is really hard to scan, and it was also a bit dirty and had some droppings on it from the Three toed Woodpecker that he used to deliver it. Anyway, without further rambling, here is what they spake of! Enjoy! (This story is entirely fictional, well, they DID have a chat, but we all know Squirrels prefer I-pads, but fuck it, it fits.. Ha-ha.)

Hello Rami! How are you doing? As it is summer in Finland right now, what are your summer plans this year? Does the Covid situation allow you to do anything at all?

Covid situation is pretty good here in Finland, so I decided to do domestic summer trip with my mobile home and took my family with me. We have really great places here in Finland, like Oulu, lake of Oulujärvi and territory of Savo. We drove over 2000 km during couple of weeks.

Convulse was formed exactly 30 years ago, this year. How do you think the world has changed since those days and is playing in Convulse somehow different today, than it was back then?

That’s true, we released “Resuscitation of Evilness” exactly 30 years ago. Feels somehow like yesterday for me. The world has changed a lot and lot of things are more complicated these days. I think the development of technology has changed the working life and daily life too. Internet and social media have brought a lot of good and also bad things. Consciousness has increased, but also false information and insecurity. Running a band is basically the same as before. We practice together, write new music and hope somebody is interested to release it. As you may know, we prefer analogue recording technique, if possible and physical records. I am pleased that we have had an opportunity to play also selected shows abroad after the reunion of Convulse. It was not possible back in 90 ́s.

You guys have lined up a new album called “Deathstar” to be released later this year. What can you tell us about it? Is it more of a new or an old kind of an album for Convulse fans?

Our latest and fifth album “Deathstar” will be released 30th of October via Transcending Records. What can I tell about it… It will be a disappointment for those who only like to listen to old school death metal, but I am sure it ́s an interesting experience for those who are listening to music more open minded. We recorded it in the same analogue studio, with the same producer as the “Evil Prevails” album back in 2013. The sound of the album is timeless. It‘s very hard to tell in which decade it has been written and recorded. We wrote and rehearsed the album material almost three years. We are somehow pretty mature band with the way we practice and write songs. We have really played together almost every week during recent years.

To me, “Deathstar” sounds wonderfully “Finnish”, with all these similarities to Amorphis, Kingston Wall and maybe even a bit to Circle. Was this the intention all along, or rather something that just happened and did I miss some band from the list?

I think it sounds mostly Convulse. You never know what you will get with a new Convulse album.

Neither do I. So basically it means that we don ́t plan some direction of the sound or style. We just write the songs coming out at the moment. Of course mine and other band members musical tastes and musician backgrounds give a map for our output. 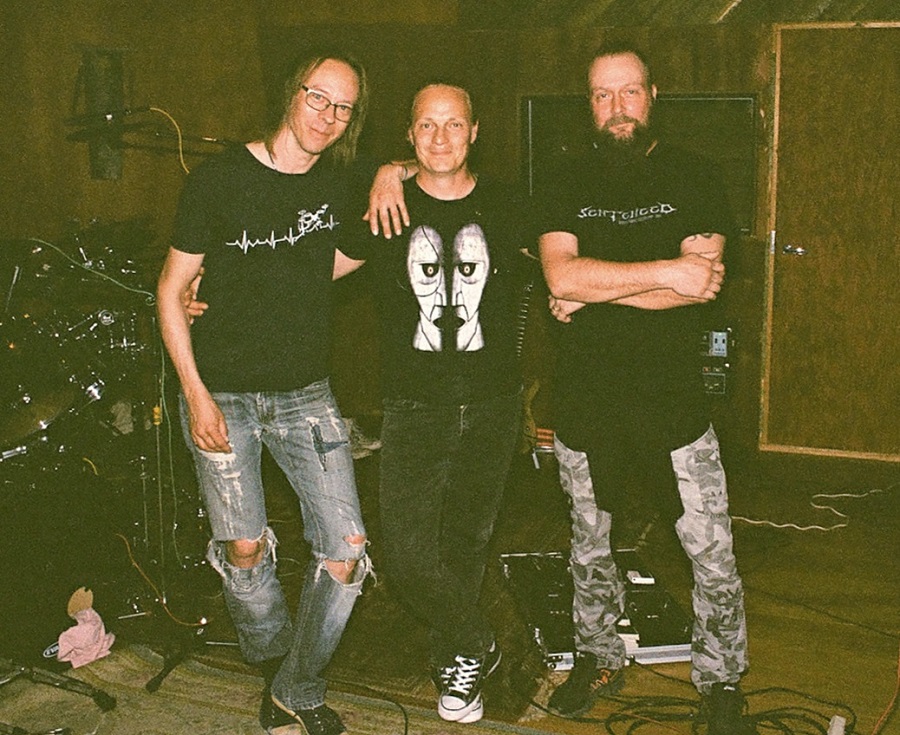 Is there an overall theme in lyrics and where did the album title come from?

It‘s almost a theme album lyrically. Deathstar is earth and I think we do our best to destroy it. Songs like “Make Humanica Great Again” or “Extreme Dark Light” tell my opinion of this so called progress. Despite the growing havoc, darkness and egoism, I wish all the best for the next generations in the last song called “Light my day/The end.”

There’s a song called “Chernobyl” on the album, with – what I believe to be – clips from Finnish news broadcasts around the time. When you look back to the cold war era in general and the Chernobyl incident, what kind of thoughts and memories come up? After all, it was all happening right next door to Finland.

You are right man. I tried to get a permission to use original clip from the news of explosion of the Chernobyl nuclear power plant in 1986. It was too difficult and expensive, so I read the original news by myself. This song is a reminder of our endless will to reign over powers that are uncontrollable. I had just turned 13 years (of age) when Chernobyl exploded. I remember the overall feeling of fear and uncertainty.

Convulse has somewhat fortunate a shadow of the past on you guys. You were among the very first Finnish Death Metal bands who ever released a full album and your demo “Resuscitation of Evilness” and the debut album “World Without God” are viewed as some of the best ever releases coming out from the scene. Has this been more a blessing or a curse to you? For example, I do not see many people speaking about the splendid death ‘n roll album you did, “Reflections,” at all.

I am satisfied with the history of the band and I am also satisfied with the recent situation. We have always done what we like to do. “Reflections” is also a very much liked album all over the world among the people who listen to more experimental Metal music. Overall, I do not see any problem in our situation. We don‘ t have any commercial pressure. We can make that kind of music we like to do. At the same time we love to play live shows with “World Without God” material.

Do you read a lot? If so, what are your favourite books?

At the moment I don‘ t have time read books. My daily life includes working as social worker at school, I am also a father and a football coach for the children. I am studying for the neuropsychiatric coaching too. Besides this, I am running a band and try to play football myself too as much as I can. I also collect and renovate all kind of vintage stuff. I think it’s my hobby too. I prefer news and articles at this hectic situation.

If people from outside Finland would want to travel to a location that has inspired you to write music in your home country, where would they have to go?

We have forests and lakes everywhere. Also in the biggest of cities. Find a peaceful place and observe the beauty and purity of our nature. Don’t mess it, honour it.

Thanks for the interview Rami! Any “zineish” famous last words left?

Take care of each other and keep in touch. We will release a new single soon and the new Convulse album is just behind the corner. Thanks to The Metal Wanderlust for this interesting interview and all the best for you also!

Okay, it’s gotta be said, the aforementioned Three toed Woodpecker took a while to get here, but what a great dude is Rami, and we are very glad that he took the time out to talk to our somewhat hirsute and often very smelly mate the PCO! Hey, caves don’t often contain showers now do they! (Okay, it’s the editors fault – he is a bit slack at times, maybe we should beat him to death with some bark…) Excellence all around anyway! Hope you enjoyed this, and here are some links!