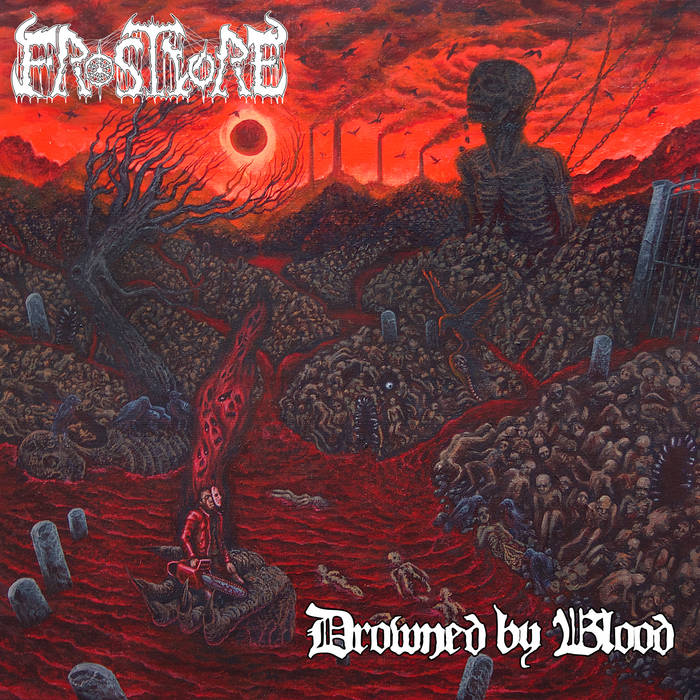 Swedish Death Metal from Japan. Sounds about as authentic as the Samurai warriors of Iceland, and yet this is exactly what Frostvore has on offer for us, according to the promo information. Whereas most promo jargon is often just a random selection of fancy confab, in Frostvore’s case it seems to be a spot on description indeed!

Formed around a decade ago, Tokyo based Frostvore are finally offering us their first full length album, “Drowned by Blood” which is being released through Testimony Records, and it seems to fit the game plan of the label real well. After all, Testimony specialises in Old School Death Metal, but their releases often have a twist to them too. Whereas the Reek album, released earlier this year, reminded us of the greatness of the Death ‘n Roll, and Sodomisery hinted at the glory days of the Melodic Death Metal of Dissection and Unanimated alike, Frostvore seems to be a natural continuum in this chain of releases. Like Reek, they too come across like a frenzied Death ‘n Roll berserker (maybe in this case a sumo wrestler gone mad, skating down the street with a hearse and a bazooka?), but Frostvore also have a lot to offer in the fields Melodic Death Metal sensibilities.

The first thing you will notice about the album is the excellent lo-fi type of a production. Actually, it’s barely a production at all. There’s a definite garage vibe here all over. The mix is far from polished, some of the cymbals are distorted and occasional leads jump in way too loud, but bloody Helvetian Alpine horns of the underground, it still somehow works!! Among all this wannabe 90’s stuff you hear these days, Frostvore are almost the most authentic. After all, back in the days it was all about that barely produced garage type-of noise, especially within the more marginal of scenes like Extreme Metal. There simply were no budgets and studios were dear. Things were rushed through, even in the best of cases. Although it was surely not purposeful, that certain unpolished glamour meant the world in the 90’s sound, and being just messy, for dirtiness sake is not the same thing.

And how about the music then? Well, it could be rammed into the quite obvious mental box of Dismember, spiced up with the well crafted melodic passages of At the Gates and even Gothic era Paradise Lost, especially on the marvellous title track. The melodies are fine tuned to raise the momentum and they are dished out with patience, never overdoing the nitro, rather they use the melodies only as a much needed extra boost on the difficult curves of the track, so to speak. This melodic content also displays Frostvores quite obvious love for Iron Maiden, equally shared by the early Swedish scene as well, which makes the whole result even more authentic sounding. If somebody said this album was from 1995, I sure would buy the hoax.

Aside the obvious ProgCave hit to be – the title track – I’d give an honorary mention to the surely soon to be underground Death Metal classics “Extreme Cold Torture”, “The Reaper” and “Lake of Vein”. All of these tunes could have easily been included on Dismember’s “Death Metal”, or Dark Tranquillity’s “Skydancer”. Wonderful stuff, all of it.

So, it’s safe to say “Drowned by Blood” is easily one of the most interesting debut albums out this year, in the field of Old School Death Metal at least. It’s nothing very original in delivery, but surely worth checking out for every Old School Death Metal enthusiast. The album could maybe use a bit more arrangement here and there, but we have to remember that this is only their debut album. Frostvore have all it takes to drop the bomb with the sophomore release. Let this be a storm warning for everybody instead. One would be well advised to keep the name in mind, as with upcoming Lik album, this is some of the most authentic Swedish Death Metal worship coming out this year. Even if it isn’t the perfect outing in a genre already rich with classics, it has raised the enthusiasm rate to such an extent that my faith in Samurai warfare in Iceland has been more than well restored.