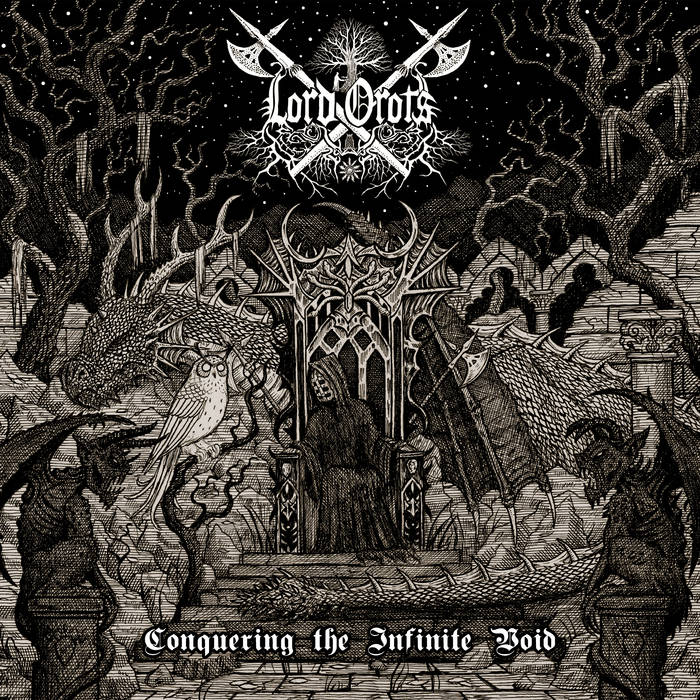 Lord Orots has released three EPs and an album (“Latzineko Erresumaren Itzulera“, which translates to “Return of the Latin Kingdom”), all of which are available directly from the Basque artist himself via Bandcamp for a mere €4. While these predecessors are all worthy of your listening time and the small monetary amount requested, “Conquering the Infinite Void” brings Lord Orots into a new realm. This initial CD release from the artist on Onism Productions expands the sonic palette beyond synthesizers to include the calculated use of guitars.

“With Conquering the Infinite Void, Lord Orots invites us into his dreams and we accompany him as he wanders an endless world of hope, promise, fear and danger.” Given that lead in from the artist and label, I certainly did envision a dream world as I listened repeatedly to the four tracks of this release. From the mystical, peaceful start of “A Timeless Kingdom” we enter into this dream state, but immediately there is a sense that something is not right. Twinkling angelic harp melodies are joined by faerie voices, but soon overpowered by insistent guitar, evoking Black Metal over Gothic synths.

As we arrive in “The Black Abyss”, we hear the universe breathing around us. A vision of a darkened hallway in a remote castle arises in the mind. I am strongly reminded of Love Is Colder than Death, but with Mayhem guitars added. We hear a scream of terror from below, a demon awakening in the dungeon. The scream becomes louder as the creature shreds its shackles and escapes its bondage. The dream quickly becomes nightmare as the guitar intensifies. A final scream and we seem to be released from the dream, but still unconscious. Quickly, the nightmare resumes, with the demon seeking freedom to hunt and kill its prey.

Then “Nefaxion’s Awakening” takes us outside of the castle and into a mild thunderstorm. This track returns to the strong goth influences, hints of Dead Can Dance, more Love Is Colder than Death, and now bringing to mind WILL. Nefaxion, Lord Orots’ dragon protector rises to confront the demon. It moves through a forest silently with steady rainfall keeping it grounded as it searches for the escaped threat. The darkness is illuminated only by the occasional flash of lightning as the dragon makes his journey.

“The Lord Rises from His Throne” makes me think again of WILL, with the tribal percussion and simple intertwining synth lines – bassoon and strings, xylophone. But is Lord Orots awake or still in the dream world? Does he also need to confront the demon and defeat it for good in order to return to the land of the living? I suppose that I will leave that to you to listen and decide for yourself.

I would be remiss if I did not mention the cover art for “Conquering the Infinite Void” by Joan Llopis Doménech. He has created a rendering of Lord Orots on his throne, with Nefaxion asleep behind him that looks like an ancient woodcut or engraving. The level of detail in the artwork is astounding and beautiful. I encourage you to check out other works by Joan.