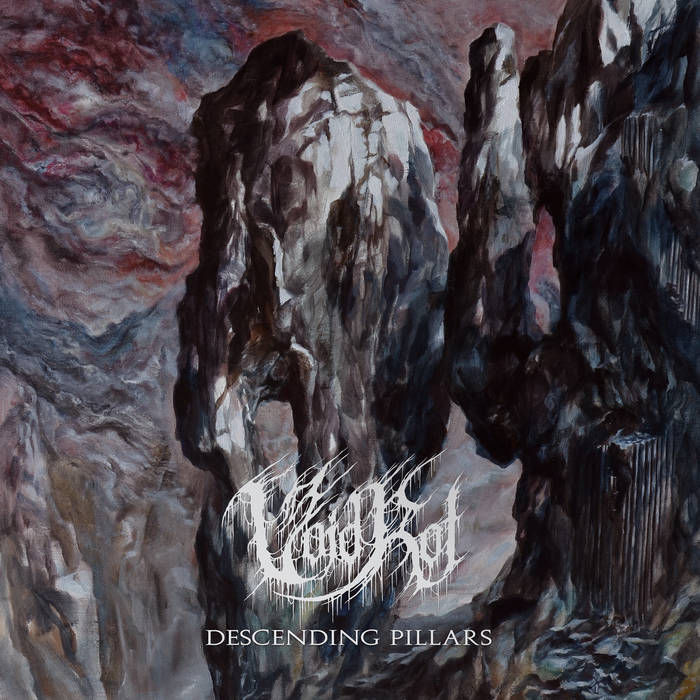 The first piece I ever wrote for The Metal Wanderlust was for the Split EP Void Rot did with Atavisma. In that review, I affectionately dubbed Void Rot the “Doom Wendigo”, by which I was suggesting anything that ferocious coming out of Minnesota had to be a mythological flesh-eating forest creature. “Descending Pillars”, the band’s first full length effort, proves to be equally savage within the first two minutes of the opening title track.

Vocalist, John Hancock, growls a welcome with an almost melodic gnarliness, as he and fellow guitar scoundrel Kent Sklarow work in tandem to remind us we’re just about as far away from Minnesota as we can get. The ease with which the rhythm section (Will Bell – drums, and Craig Clemons – Bass) crushes the low end gives the impression the quartet is riding around on a tank just ploughing through fields of skulls.

“Upheaval” and “Liminal Forms” are a collective ten-minute Death/Doom hybrid bringing to mind songs like “Oath of Armageddon” by Incantation, and the chunkier parts of the “Buried Death” album by Coffins. But Void Rot is not overly friendly when it comes to comparison, which is what “Delusions of Flesh” is there to remind us of, and let me tell you by the time that song hits the two-minute mark, if you’re not grinning like a satanic monkey there is something seriously wrong with your brain!

The most effective Death/Doom Metal is complex in its simplicity. Atomic, reverbed out three-chord riffs, tremolo-picked melodies, growled vocals that aren’t overly guttural, and a seemingly bottomless low end. The trick is to pull all of that off with the perfect balance of aggression and sincerity, while maintaining the sort of creative integrity that comes with both skill and maturity. Asphyx and Krypts are both excellent examples, standing on the Doomier side of Death, together in that way but maintaining their own uniqueness. Void Rot was well on their way to this just on the strength of their half of the split with Atavisma, but by the final track on “Descending Pillars”, there is absolutely no doubt this band is their own kind of monster.

For lack of a better word, “Monolith (Descending Pillars Pt. II)” is fucking diabolical!  This is, perhaps, partially due to the rest of the album doing such an incredible job building momentum, but any way you slice it “Monolith” will punch a hole through your chest and pull out your spine, undoubtedly having a laugh about it later over a pint with its mates.

I simply cannot get enough of this band, which I could have easily said before hearing “Descending Pillars”. They possess a rare confidence that can’t be ignored, and I’ll be rooting for these dudes every step of the way. Fantastic shit, indeed.