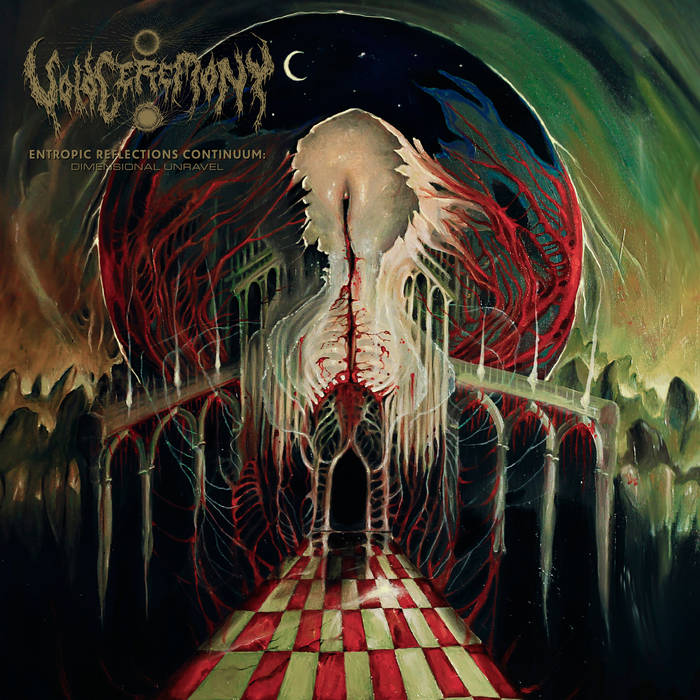 20 Buck Spin is having quite a year. With releases by Skeleton, Obsequiae, Solothus, Ulthar and Bedsore, the label churns out remarkably unique and often quite destructive chunks of Metal on a regular basis. The debut release by California band VoidCeremony is no exception.

Some folks like a little Black in their Death Metal, and some like a little Death in their Black Metal. Other enjoy their Death Metal progressively blackened, and a bit on the strange side. “Entropic Reflections Continuum: Dimensional Unravel” will make all of those picky weirdos happy. It’s the kind of album that, if it were a high school kid, would beat up the math teacher for picking on the cheerleaders, skip classes to smoke joints with the janitor, and still graduate at the top its class beloved by nerds and jocks alike. It’s the cool kid with the spider web neck tattoo who makes a lasting impression on absolutely everyone, and even though this analogy is pretty lame, I have no doubt you all remember a dude like that.

From the opening seconds of the album, it’s obvious these guys are disciples of Chuck Schuldiner. Say what you want about the ease with which that name gets thrown about, but it’s difficult for me to think of a better example than Death. Earlier this year an equally impressive album came out by a band called Cryptic Shift, and I came to the same conclusion, so if it makes you feel any better VoidCeremony sounds like Cryptic Shift’s twin brother. Blood Incantation is a second cousin, and Cynic is the drunk uncle. Any way you slice it, the musicianship is astonishing.

“Empty, Grand Majesty (Cyclical Descent of Causality)”, possessing both the longest run time and song title, is perhaps the best example of extreme Death Metal glorification. Other than the extravagant guitar riffage (presented to us by Garrett Johnson and Jon Reider, both also on vocals) the drummer (C. Koryn) kills with all sorts of psycho-jazz intensity. All of this is fucking awesome, but what really holds things together is the diabolically transcendent fretless bass wizardry of Ian Mann. This dude is truly spectacular. There are no other words.

Honestly. I’m not quite sure what else to say about this album. What the hell are you doing reading this, anyway?! Go listen to some VoidCeremony!