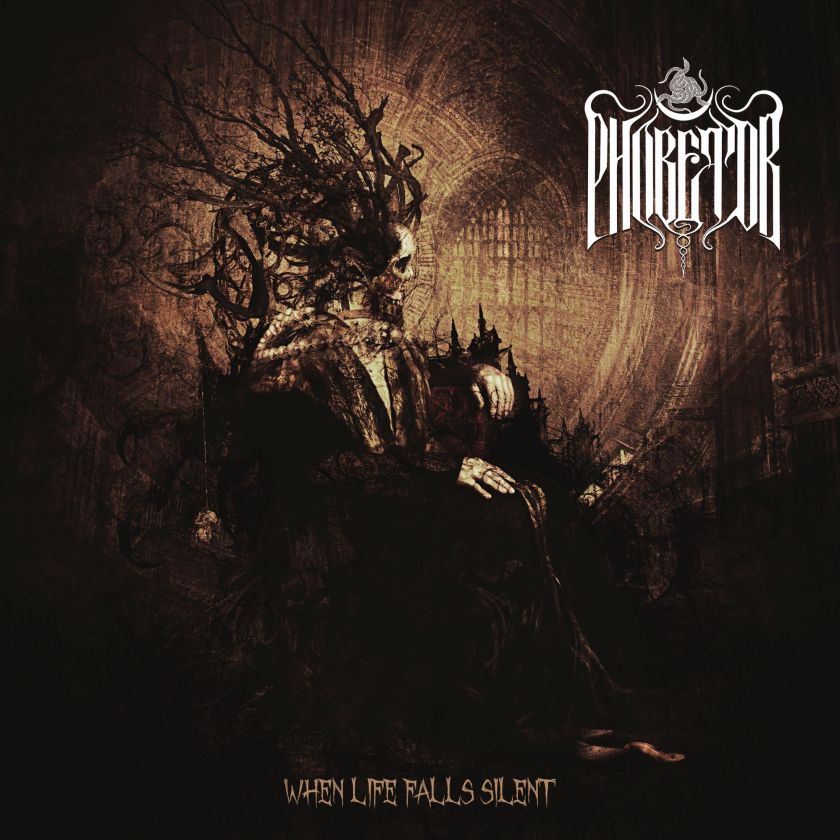 It has taken me some time to figure out what to say about this band. Upon first hearing their soon to be released debut “When Life Falls Silent”, I remarked to a friend that Phobetor sounded like six different bands playing at the same time.

I was so impressed with their sound, I became quite fixated on trying to understand where they were coming from. Musically or conceptually it was obvious Phobetor fit just outside of any preconceived mold, which was extremely exciting, if not a bit frustrating. Not the type of frustration that keeps a dude up at night. More so a sort of blighted hope that writing anything about them would come easily. But as so often is the case in situations involving self-education, the journey towards a deeper understanding of this fantastic music has been awesome.

Phobetor, I soon discovered, is the Greek god of nightmares. One of the one thousand sons of Somnus, the god of sleep, Phobetor appears in dreams as any number of beasts with the sole intent of giving rise to terror so paralyzing the sleeper may never wake.  He does this not out of spite, or hereditary ill-will, but because it is his function. It is simply what Phobetor does as a consequence to existing in the first place.

Now, naming a band after a mythological boogeyman seems a naturally Metal thing to do. But Phobetor take the naming of their band a step further by becoming the musical personification of the myth itself. By combining a devastatingly aggressive approach to songwriting, and illustrating an understanding of the intricacies of undisguised trepidation through both verse and transition, Phobetor fascinates from every conceivable angle.

It’s not the aggression that hooks you out of the gate, but a flowering deviousness which lingers within the ebb and flow of the material, particularly in Debora Conserva’s vocal approach.  From the haunted carnival atmosphere of “Merging Infinity” to the simultaneously technical and melodic ferociousness of “A Toxic Lie” and “Blind Widow” Conserva growls, howls, and screams like a spectral ghost. The power in her voice is immaculate and seemingly effortless, with a range that consistently brings to mind the likes of Angela Gossow, Max Cavalera, Tatiana Shmailyuk, Dani Filth, and the late Jill Janus to varying degrees, and sometimes all at once, if you can imagine such a thing. This woman is not mucking about, and doesn’t waste a single breath trying to finesse the listener into a false sense of security.

Don’t think for one damn second that Conserva is on her own, either. She’s backed by a band whose talent forges thoughts of everything from Gojira, Arch Enemy, and Decapitated to Iron Maiden, Beyond Creation, and Tool. And along with the songs mentioned above, “Whispers of Dissonance”, “Psychopathy”, and “Bury My Name” are a whirlwind of clashing styles that the band just beats back and forth like goddamned ping pong balls!

By the time “Dysmorphia” arrives in the set, tucked back towards the end, you start to wonder if you’re listening to a concept album. All throughout there are themes of isolation, depression, confinement, loneliness, and apparent resentment towards authority. The occasional clean vocals Conserva provides are brief, which makes their presence both unique and mysterious. Possibly breakthrough moments for an unnamed character, or an inner child begging for release.

With all of that being said, the title track “When Life Falls Silent” leaves little doubt that Phobetor have been telling a story all along. Perhaps not in a traditional sense, but as the band’s own bio points out, “When Life Falls Silent’ is the truth behind the veil, the seething turbulence of reality without the comfort of mutually agreed upon deceits”. Under normal circumstances, this might come across as boastful, but this band is anything but normal… or circumstantial, for that matter.

When Phobetor says something, through a myriad of voices, they mean what they are saying. And like their name-sake, they do this because it is their function. It is simply what Phobetor does as a consequence to existing in the first place.

“When Life Falls Silent” is a brilliant debut from a band that will undoubtedly be spinning heads for a very, very long time.