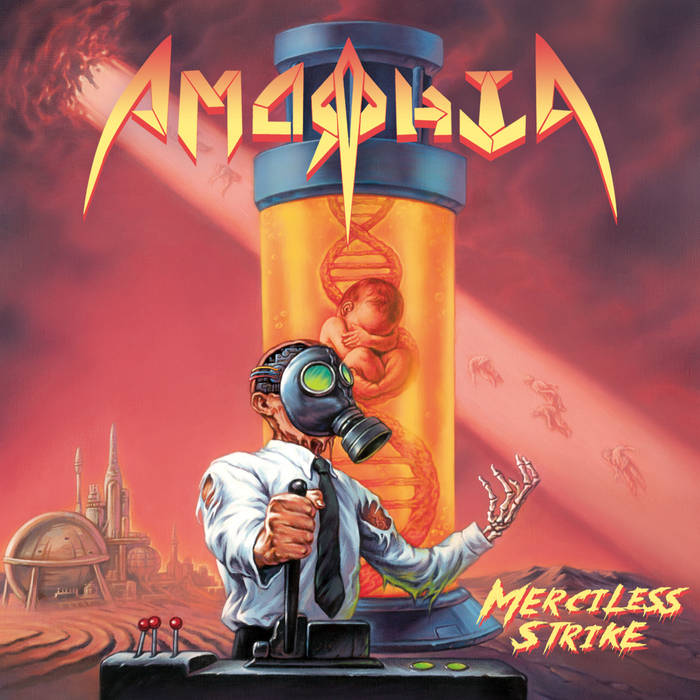 Representing old school Thrash in their native Kerala, India, Amorphia released their first album, “Arms To Death”, independently in 2018. It was re-released by Chinese label Awakening Records in 2019. “Arms To Death” is a solid Thrash album, very much in the vein of icons such as Slayer, Kreator, and Sodom. A mere two years later, the band is at it again, having lost not an ounce of brutality.

Album number two, “Merciless Strike”, was released mid-February 2020, once again on Awakening Records, this time with eye-catching cover art that, at first glance, brings thoughts of Ed Repka’s work for bands like Death, Dark Angel, Toxic Holocaust, and Megadeth. The actual artist goes by the name of Uncle 3, but I mention this because the sound of Thrash is evoked by the image before hearing a single note. This was an extremely effective tactic, which some may consider a bit on the sneaky side, but the music proves that the folks in the Amorphia camp smoke what they’re selling.

Album opener, “Death Zone” sets the pace immediately, with a speedy Thrash groove and an Araya/Petrozza-like vocal cadence. While the band is still wearing their Slayer/Kreator infatuation on their sleeves, there is an equal urgency and realness present, which will please any fan of the early Thrash sound of the mid-1980’s.

“Judgement Day”, “Merciless Strike”, and “Mutant’s Rise” possess the same intensity vocally, but add more of an Anthrax flavor in terms of guitar work, which is certainly not a bad thing. In fact, this expands Amorphia’s appeal a great deal, in my opinion, adding a boisterous quality lacking in much modern-day Thrash.

“Upcoming Terror”, “Radiation Overdose”, and “Martian Law” are highlight’s, which seems odd to say, given the beginning of the album is so strong, but this is perhaps due to the song placement and subsequent flow of the material. By now, the listener has gotten used to Amorphia’s hybrid Thrash approach. “Radiation Overdose” being the strongest of the three, also happens to be the shortest tune on the album, but it is catchy as hell! I can easily hear a crowd chanting along “Human plague, Ready for the kill!”

The album ends on a destructive note with “Blazing Glares”, with lyrics warning of Satan’s appearance on earth, accompanied by an evil army of demons, all doing their best to be sure that all major cities in the world are “covered with a carpet of bodies”. Quite a way to go out!

Now, what I have not yet mentioned is perhaps the most impressive piece of the puzzle here. Amorphia, with all of their hardened annihilating tendencies, are a three piece! Faizan Mecci (Sledgehammer) on bass, Vivek Prasad on drums, and Vasu Chandran doubling up as the band’s vocalist and guitarist. And let me tell you, this is not at all obvious, even after multiple listens. Highly impressive, to say the least!

“Merciless Strike” does not redefine the genre, but nobody who’s into Thrash really wants the genre redefined. All Thrash fans want from their Thrash bands is authenticity, which is easier said than done. Amorphia delivers on this big time. Look forward to hearing more from these guys.