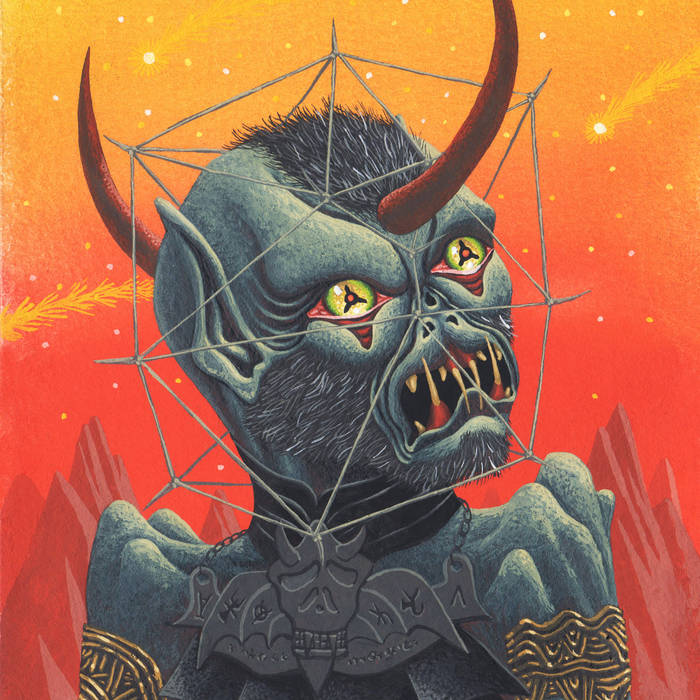 Your initial thoughts, if you were crossing paths for the first time with the work of one man project Esoctrilihum, might be that this fifth full length in five years, the “Eternity of Shaog” is it’s Lovecraft inspired, but the inspiration leans more to that of a Mesopotamian mythology but with characters/entities that are the invention of Asanthâghul’s mind, the individual behind this project, manifesting as ‘unholy music inspired by chaotic visions of an unknown dimension’, creating his own form of Black Metal Occultism, which is an admirable concept for starters, rather than trampling that already well-worn, previously mentioned path, secondly, sound wise it’s a pretty experimental form of Black Metal that is so far out of the box, you can’t even see the box, it’s that unique and bizarre.

Having heard the previous Esoctrilihum album, 2019’s “The Telluric Ashes of the Ö Vrth Immemorial Gods,” which was of a similar bizarre, but likable nature, I was naturally drawn to explore this latest musing, quite unprepared for how much further Asanthâghul has pushed his boundaries this time around, needless to say it took me by surprise somewhat.

Second listen in and I’m mentally prepared for what is about to assault my senses again allowing me to appreciate the bigger picture a little more. It’s a very well composed release both musically; were you get a lot of different instruments dropped in, including some insane swathes of folky violin on “Thritônh (2nd Passage: The Colour of Death)” and “Aylowenn Aela (3rd Passage: The Undying Citadel)” which add an interesting jarring edge to the sound and also lyrically it’s well written, clearly a lot of thought has gone into the lyrical content, which is predominantly English but a couple of tracks are in French.

Duration wise, most tracks pass the seven-minute mark and beyond, across these ten tracks, a sixty-five-minute journey into the unknown and occasionally it felt a little too lengthy but on the whole, I was fairly well engaged throughout. The further in I got the more I liked the release, I initially thought this was down to becoming more accustomed to the aural insanity but further listens still left me of the same opinion, I’m just more drawn to the latter part of the album, although there is nothing wrong with the first half, particularly; “Shtg (4th Passage: Frozen Soul)”, a short track of only four minutes that is piano/ synth led, predominantly instrumental, classically styled, but with a second half lyrical content that has a spoken delivery that is like an insane ramble rather than growled, adding an extra element to the imagery, it’s a little different than the other tracks, more reflective and haunting.

I also really enjoyed the final two tracks, “Eternity of Shaog (∞th Passage: Grave of Agony)” which has a punchy tempo with a hugely addictive blackened insanity to its feel, completed by catchy repeat riffs, cavernous backing vocals, soaring leads, a dirty blackened melody which rears up regularly and slick direction switching and tempo changing which too justifies well the seven minute duration and “Monotony of a Putrid Life in the Eternal Nothingness” which is bleakness and melancholy personified in both the lyrics and the slower delivery, very haunting and thought provoking. It does lift up out of the darkened mire midway thanks to a couple of swathes of intense blackened riffing that really drive home. Opening track “Orthal” also merits a mention, it sounds insane from the offset but has that quality which draws you in and garners an interest for the rest of the album, it’s the only other short piece at just three and a half minutes, with an up tempo drive that is both punchy and haunting in equal measures and searing repeat riffs to close. All in all, a pretty decent listen.