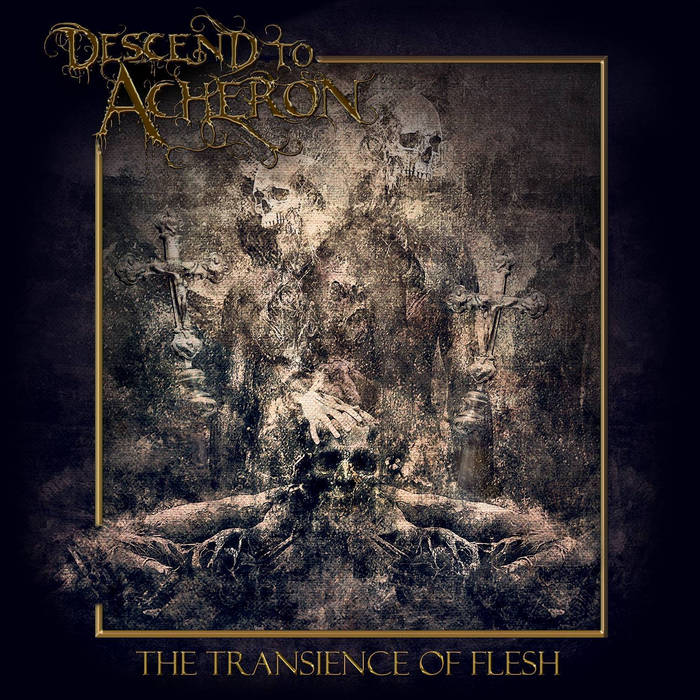 Is there more of a reassurance that Death Metal is alive and well in 2020 than Descend to Acheron? The answer is no. The band have only been around for a year or so and they already have a signature sound that in other cases is often developed over decades. Armed with their debut release, “The Transience of Flesh” EP, Descend to Acheron are not going easy on their first try. So, will you take my hand as we go into the murky depths surrounding the despairingly demented music of Adelaide Death Metal deities Descend to Acheron? Of course not, we have to see what the heck these guys are about first.

The band first came into the public eye in 2019 with their first major live performance at the Heavy S.A. music festival based in Adelaide, Australia. This, funnily enough, is when I first caught a glimpse of their aural attack. The pounding rhythms of (live drummer) Kieran Murray, coupled with the guitar glissando of Peter Clarke and (then live guitarist) Corey Davis (also a member of the band Dyssidia, whom I also did a review for not too long ago) was just sublime. Then the whole thing was just brought up another level by vocalist Andy Kite’s burrowing gutturals and bassist Matthew Phillip’s elegant flourishes (both musically and physically across the stage). From then, I knew this band were not going in the generic route of Death Metal.

Diving into the EP is the title track, “The Transience of Flesh.” I couldn’t help but laugh at how heavy the start of the song is. Between Andy Kite’s vocal barrage, coupled with Peter Clarke’s flamboyant yet brutal riffage, this absolutely pushes the listener right on their seat. But it seems as though they just pilejust  on the brutality all the way through the track, sprinkling in some rather catchy grooves that almost makes the listener hum along. It becomes evident on tracks such as “Plague of Superstition” that they’re not just going for your standard Death Metal album, too. There are elements of Black Metal, Thrash Metal, Groove Metal, even Progressive elements that are thrown in to give the overall listen that much more colour. Of course, you have to give Descend to Acheron props as well for having solid musicianship across the board on their very first release. How vocalist Andy Kite delivers his gutturals over the riffs laid down by guitarists Peter Clarke and Dave Hawkins encompasses just how much work the band put into their craft.

After several listens of the EP, I noticed something that caught my eye – or should I say ear. The lyrical concept behind “Your Suffering Is A Gift.” The band mentioned in their bio that it’s “a scathing commentary on the ways and practices of Mother Teresa, which is sure to get people talking”. I definitely concur that it would get people talking. Just that sentiment alone shows that vocalist Andy Kite is not afraid to delve into heavy and/or controversial subject matter. In my eyes – as a reviewer who’s heard his fair share of mediocre lyrics – it’s a welcome change having a set of lyrics so realistically vile.

So, to wrap up, I quote another piece of their own bio stating “Descend to Acheron write songs that are both brutal and memorable in equal measures.” Now, in my mind that sounds like just about every Metal band’s motto in spades. But what’s surprising about Descend to Acheron is that the statement actually holds up remarkably well throughout the whole EP.

Megadeaf’s deaf-inite choices for “The Transience of Flesh” (I don’t want to spoil too much):

Be sure to support them at the following links!: