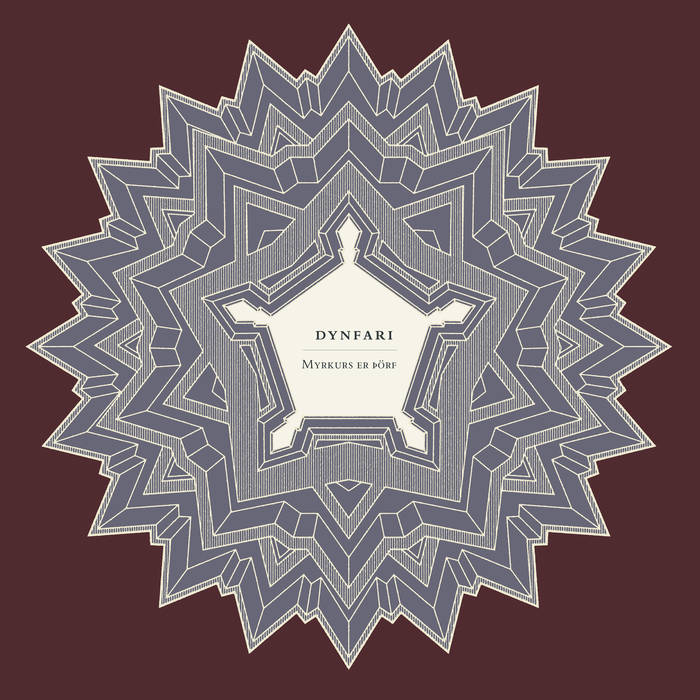 Iceland’s Dynfari are back with their fifth studio full length “Myrkurs er þörf” which translates as “Darkness is needed,” heavily steeped in an atmospheric meld of Black Metal and Post-Rock with a mood that is both beautiful and solemn, menacingly engaging and reflectively sorrowful, matching perfectly their bleak lyrical inspiration from subjects once again that are dark and difficult, this time an introspection on thoughts of suicide and self-destruction, the essence of bleakness and suffering defeat from the shackles of your own mind, as you can see by the title translations I’ve added, yet despite this bleakness “Myrkurs er þörf” is a cathartically comforting listen.

The eight track forty-five minute “Myrkurs er þörf” has moved slightly away from the progressive style of 2017’s predecessor, the journey-like “The Four Doors of the Mind” and it’s spoken passages in favour of something a little rawer, more guitar focused but still unmistakably Dynfari, if you enjoyed  “The Four Doors……” and its predecessors you will be equally as happy with this offering, ultimately it’s a shift in the emphasis but with all those aspects you love still remaining fully intact. Everything from the composition to the musicianship is superb once again and lyrically the album is still predominantly in their native tongue, which does add a certain atmosphere, and band mastermind Jóhann Örn’s vocal delivery is superbly raw, powerful, passion filled and varied, the most moving aspect of the album, it regularly touches a nerve.

The album opens with the instrumental “Dauðans dimmu dagar” (“The Dark Days of Death”) beginning with clean wistfully reflective guitar, a beautifully atmospheric, slow builder, and it’s not until midway that the punch comes, in the shape of dark dirty riffs with that wistful melody still weaving through, along with subtle direction shifting, a bold move putting a long instrumental, five and a half minutes, to open but it is such a hauntingly engaging piece that it works perfectly at setting the scene.

“Langar nætur (í botnlausum spíralstiga)” (“Long nights (in bottomless spiral stairs)”) is a stunning track which really touched me, the vocal delivery is powerful and pain filled, with driving riffs and a powerful drum delivery interspersed with superb soaring lead work, delivered with a very organic ebb and flow to the pace, a consistent factor throughout the album and the quieter segments are very haunting. I was also very moved by album title track “Myrkurs er þörf” (‘’Darkness is needed’’) with its rugged soaring vocals, haunting repeat riffs and equally haunting reflective passages.

“Ég fálma gegnum tómið” (“I faint through the void”) is ambient and reflective to open and a slow smouldering builder but powerfully moving throughout, particularly when it’s in its more intense phase.

There is another reflective, quiet, shorter instrumental “Svefnlag” before the tortuous “Ég tortímdi sjálfum mér”( “I destroyed myself”) which opens on a pain filled scream and has within some of the most soul ripping and movingly delivered vocals of the album, yet it still maintains a very powerful force about itself, and the mid-point and second half lead work adds a necessary lift.

Onto “Peripheral Dreams,” a ten-and-a-half-minute monster of a track, a wistful builder that rapidly becomes intensely blackened, with English lyrics, ebbing away into the dark and doom laden.

Finally, “Of Suicide and Redemption,” which has a bass opener, a nice touch, with a segment of English lyrics, just enough to hit home the message which is a powerful and hard hitting one.

“Myrkurs er þörf” is one of those albums that leaves you in a very contemplative mood, it will certainly sit well with fans of their past work or that of their fellow countrymen Auðn or even the likes of  Primordial or Agalloch, and is available on CD, cassette, vinyl (silver or clear with magenta splatter) or digital formats from May 20 on Code666 Records, definitely a thinking person’s style Metal.