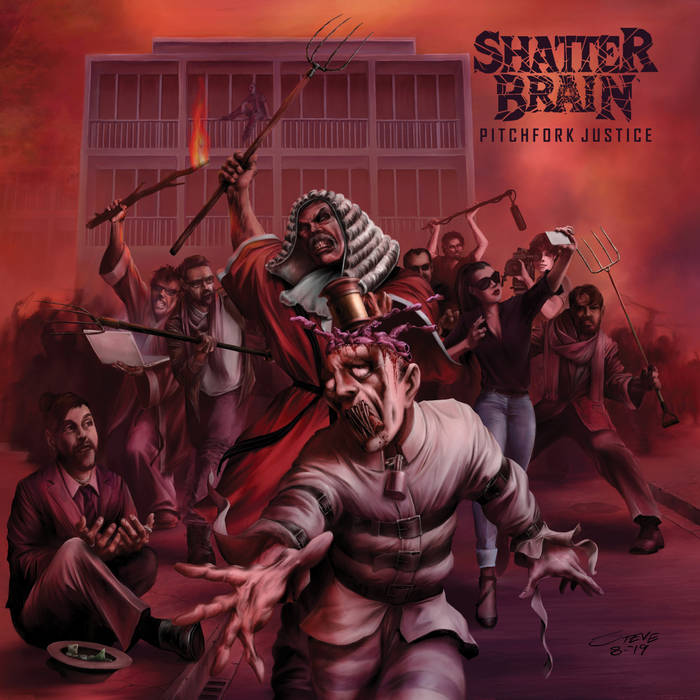 I don’t think I’ve ever seen a band that impressed me as much as Shatter Brain did at their latest gig supporting the mighty Earth Rot on their “Dread Rebirth” tour. Their combination of knuckle-driven brawn through hardcore sensibilities is cleverly interwoven with harmonies that can give Iron Maiden a run for their money. It seems that they constantly showcase fresh ideas while staying undyingly consistent throughout the album. So, does “Pitchfork Justice” do Shatter Brain… uhhh… Justice? Read on to find out!

As soon as “Talk in Fear” begins, you just can’t help but to hum the guitar harmonies. This is what I meant by ‘cleverly interwoven harmonies.’ It shows a band who’s not afraid to add a bit of eccentricity to their craft. Then the riffage & drums come into the fray and pound you down like the gavel on the man’s head adorning the album cover. You know as “Talk in Fear” finishes that “Pitchfork Justice” is not pulling any punches. Which is just what they do on the following track, “Lorem Ipsum,” even to a greater extent.

For a band that’s been around for just two years, they’ve got an undeniably tight chemistry. Guitarists Matt Disisto and Jack Hartley have such distinct and almost polarizing styles of playing, but put together on “Pitchfork Justice” however, they’re in a strange but perfect unison. Vocalist Tom Santamaria’s Sludge/Core-style ideas, coupled with his authentic teenage angst ridden screams do have quite a unique timbre on “Pitchfork Justice.” This is highlighted in tracks such as “Silent Screams.” “Lorem Ipsum” and “Death Goes On.” Credit to bassist Pat Callaghan & drummer Ryan Quarrington for being undeniably one of the hardest hitting rhythm sections in all of Australian Metal, too. I mean, just listen to “Noble Savagery” and tell me they don’t pound a hole into your damn ear drum. 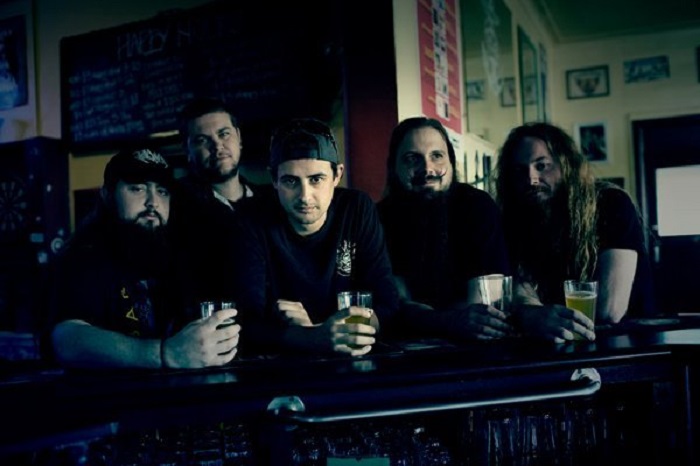 So for a debut record, “Pitchfork Justice” delivers on every front imaginable. The hardcore, brutal attitude of Sludge Metal is all over the record. But what makes this stand out from their contemporaries is their ear for, you guessed it, ‘cleverly interwoven harmonies’ in conjunction with their Sludge sound. I’m a sucker for a band who delivers more than just a “Metal” record, so for a band to achieve that feat (on their debut album no less!) is just astonishing in my books. Like I alluded to at the start, they’re an amazing live band too.

There’s so many good choices, but here’s Megadeaf’s 5 deaf-inite listens from “Pitchfork Justice”:

Be sure to check out my interview with drummer Ryan Quarrington below!

Also check out their: