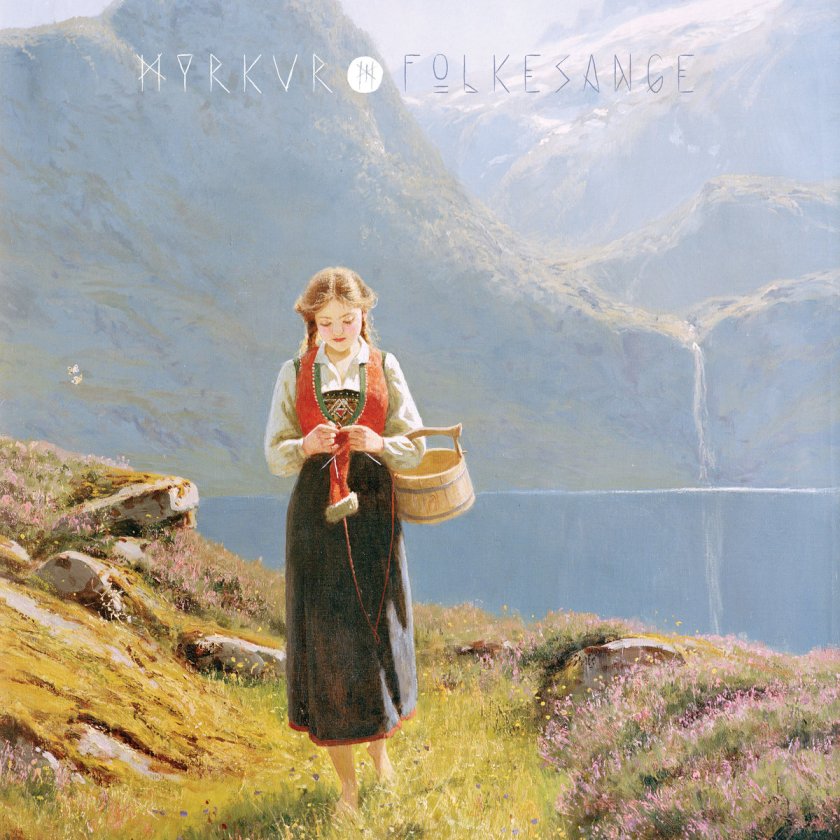 Myrkur‘s Amalie Bruun is without a doubt a force of nature, an ancient spirit walking among us. Following 2017’s powerful full-length “Mareridt” is “Folkesange,” an album of 12 mystical folk tunes. Myrkur teased a turn toward a more folk-driven sound with the release of the “Juniper” EP in December of 2018. One of the two tracks being a traditional Danish song. Despite her music usually being tossed under the tag of Black Metal, Bruun tackles taking on a different genre in the most graceful way. “Folkesange” is stunning. From it’s wonderfully atmospheric powerhouse tracks like “Ella,” to the stirring traditional folk song “Ramund,” this album structures each song so beautifully and fails to leave anything untended to.

“Folkesange” comes to us at the beginning of Spring. Its cover depicts a young girl with a halo of golden hair walking barefoot through dry ankle-high grasses dotted with pastel coloured flowers. The opening track, “Ella,” features Bruun’s voice undeniably better than ever. Her voice reaches darkened corners like the sharp wings of a bird navigating through rocky hills. Her voice mighty enough to make the crystal clear lake shown on the album’s cover quiver beneath her tone. Gentle strings like a wind carving through the mountains. The drums hit like waves smashing against the sand. The next song, “Fager som en Ros (Fair as a Rose),” is like a twirling dance. Her voice tossed up and down like partners swirling around one another’s feet, wreathed in each other’s loving arms. This track feels as dizzying as it is to fall for another, to come to rest within their arms, heart beating in your throat.

The opening notes of “Leaves of Yggdrasil” float out like light flower petals. There’s a feeling of longing this track produces that is strong and true. Bruun sings in English and speaks of her heart being filled with a “fever of love’s fire.” Her voice as striking and as smooth as the stringed instruments found here. Another traditional folk song found on this album is “Ramund,” a song that tells a story of a man and his beloved sword. The atmosphere Myrkur crafts on each of these songs is superb. “Tor i Helheim” has stringed instruments that pitter patter like rain drops tumbling from greening leaves. “Svea” opens up with a wall of sound that brings to mind a massive gust of wind charging through a stone corridor. “Harpens Kraft” sounds like you are skipping through a sunlit meadow, sun warming the crown of your head and the tops of your shoulders. There’s a call and response in this song that reminds me of the early morning birds that sit and chirp outside of my window. On the topic of birds, “Gammelkäring” begins with the caw of some kind of blackened bird (I think it is safe to assume they are crows) and it sounds like Bruun is singing to us in a cave.

The 12 songs on “Folkesange” are awe-inspiring and just so, so beautiful. Bruun’s voice is stronger than ever before and she displays this power in the most magnificent of ways. The timing of the textured instrumentals and harmonies is hair-raising, and the stories they tell are unmatched.

There are stories to be explored on this album – the bloody beheading of an emperor, a young girl hoping to catch the eye of a boy, or a fair maid waiting to be reunited with her true love. Bruun’s voice captures you instantly and keeps you obediently listening until the final instrumental “Vinter.” Myrkur shows that she can flawlessly create music outside of the realm of Metal. Like shadow to light, you need that darkness to craft something a bit more sunny and warm (if a beheading can be considered “sunny”).