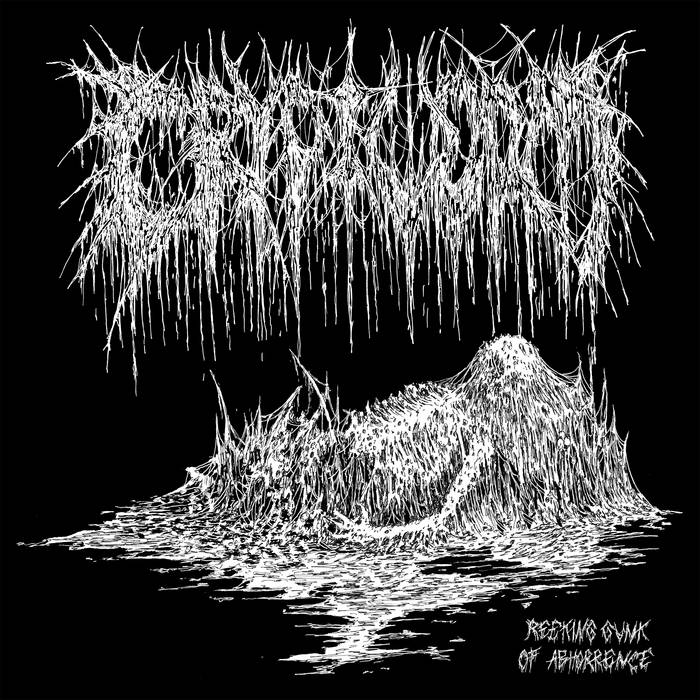 I’ve said this before and will say it again, no other Death Metal band had such an influence on their peers as Undergang have had on the previous decade. The sound, vocals and the artwork, they sure created a brand for many to follow. The latest adaptation of the style would be Cryptworm from Bristol, UK. Thirty seconds in, and one look to the cover art will take your thoughts to Denmark in an instant.

Fortunately, there is more to Cryptworm than just plain Undergang worship. Their latest EP “Reeking Gunk of Abhorrence” definitely hints of more versatile songwriting than that. After spinning the EP a bit a definite Demilich vibe sets in with all those angular and futuristic riffs a certain Antti Boman made famous in the early 90’s. Cryptworm also venture occasionally into the realms of groove, bringing back memories of Pungent Stench in places. So, they sure are a bit more of a complex beast than the first guess would have insinuated. Good!

Opening track “Festering Maggot Infestation” would be the most Undergang influenced piece on the EP. The title track opens up with almost a jumpy groove, creating perverse ideas of a Death Metal Limp Bizkit. “Self-Dismemberment” could be out of any early 90’s Finnish underground Death Metal demo, and “Cesspool Perpetual Decay” (another nice thought there!) comes across with a bit of a slower tempo and an increased dynamic. Out of the four tracks here, it’s the last one that really stands out, with the classic build of slow intro, faster burst and groovy mid-parts.

After several listens to “Reeking Gunk of Abhorrence” I’m still having hard time figuring out where the scales for Cryptworm will eventually set. The riff swarms on the EP are mostly on the enjoyable side, but then again, nothing here stands out as exactly original either. Every single aspect on Cryptworm’s music has been done before by somebody else. And most of the times better. The riffs, the drumbeats, vocals and style of the artwork – everything. The overall groove never fully takes wing either, even if the demented sway is definitely there. The musicianship has plenty of potential, but has yet to be perfected. Not yet. And here lies maybe the biggest threshold to cross with Cryptworm.

The Music is enjoyable and stylistically coherent, but it would simply need some more time and thought to fully capitalise on the potential. If these guys are able to keep what they have here and push their boundaries just a bit more in the performance and song writing departments, the future of Cryptworm will surely be noteworthy. I personally, at least, will be in the queue at their metaphorical door and start waiting for the debut album, because despite some minor complaints, the band is definitely headed in the right direction.