To follow up our review of the excellent new release “Back From The Grave, Straight In Your Face” from Portugal’s Innards, our beloved Meddlefan had a bit of a chat with vocalist/guitarist Hugo Andremon. Great guy, making some great music right there, have a read and see what makes him tick!

Hey there Hugo, to begin with I just want to say thank you for doing this interview.

My pleasure, Robert! Thank you for this opportunity to speak my mind about my music.

To begin with, where did you grow up?

I grew up in S.João Do Estoril, near Cascais, a beautiful fishing village, facing the Atlantic Ocean. Beach area close to Lisbon.

And where do you live now?

Could you share with us what got you into playing Death Metal?

I started listening to Metal music in 1987, at eleven years old, because of an older cousin that recorded me some tapes, and I was already attracted by all the horror themes, and record covers. I was a Horror fan too already, so everything matched

She got me a tape with a Metal radio show recorded on it, and when I listened to those songs I felt something magic inside. I was already a Rock and hard n’ heavy fan, liked Whitesnake, Bon Jovi, Europe, Status Quo, Scorpions, and a lot of Pop from the 80’s and 70’s dance music, like from the disco sound to Rod Stewart. My fave bands at that time were the Thrash Metal icons like Slayer, Sodom, Kreator, Destruction, etc.

After listening to Death‘s “Scream Bloody Gore,” and “Leprosy,” and Possessed‘s “Beyond The Gates,” I got hooked by that kinda sound and vocals. Specially when Earache started to deliver all those ‘new’ bands at the time. There was no coming back! 😉

What other projects or bands do you play in, or have you played in?

I started at thirteen years old recording Death Thrash Metal with an acoustic guitar with a mic inside stuck with tape, and two k7 recorders with mic and mini-jack line in. I recorded the guitar first, the sound was so bad that it made the distortion by itself. Then I played back in one k7 player, and the other one recording the audio from it and me growling and making fake drums with to sticks on a leather couch, hahaha!

Then my first electric guitar at 16, and my first Thrash/Death Metal band, called Godless. After that, at the end of the same year 1992, I met two guys from the recent band at the time Grog, and joined the band as the only guitar player. I played with Grog from 1992 till 1998, and later again from 2003 to 2010.

We recorded the 1994 promo tape, the 1995 EP Vinyl, the 1996 album “Macabre Requiems” that is considered one of the most important Portuguese releases when it comes to Death/Grind! A split in 2008, a compilation in 2009, and then I left the band.

Back in 1994 I created my solo project The Sorcerer, a more Black Metal orientated thing, influenced by bands like Bathory, old Kreator, old Sodom, old Sepultura, and some of the early 90’s Scandinavian Black Metal bands like Burzum, Diabolical Masquerade, Ancient, Abigor, Satyricon… Then I joined Simbiose, a Crust/Punk band in 2002, and turned their sound into Crust/Thrash/Death Metal until 2007.

In 2003 also joined a Portuguese cult Black Metal band called Filii Nigrantium Infernalium, and composed and recorded their first album, very different from their previous works.That album was also a mark in the Portuguese musical scene.

I was playing in three bands at the same time from 2003 till 2007. In 2007 I just left all my bands and decided to go on my own, tired of being ripped off by my own friends and band mates, and see them bragging and lying about something I did, not them.

In 2013 I woke up my solo project from hibernation, and started to write and record new songs for The Sorcerer project. At the same year I got a record deal and in 2014 I recorded and released the twenty year awaited debut album ” A graveyard of fallen dreams“.

I only did two shows as a band, and stopped the project again. My thing is Death/Grind, so in 2016 I felt the urge to make some good old school Death Metal and created Innards!

Wow, that’s a lot of hard work! How many releases do you have?

When is the release from Kunal and Transcending Obscurity Records coming out? (Already is out, blame the slack editor.. ha-ha.)

Its going to be released on the 21st of February! 🙂

And can you tell the readers just what they can expect from this release?

Pure old school Death Metal, with GrindGore! If you wanna travel in time and go back to the late 80’s and early 90’s, and listen to that old European Thrash Metal, mixed with the best old Florida Death Metal acts, Innards is the perfect soundtrack for that trip!

What are some of your hobbies?

Walking my dog, rehearsing, cinema/movies, fishing, gathering with friends, walking on the beach, swimming in the sea, some sports when i’m up to it, smokes and hot coffee,  the couch and thriller movies 😉

Do you rock climb? Do you skate?

I used to skate when young kid, but never on a high level, just for fun.

Climbing sea rocks was my fave sport when I was a teen, gather some cold beers, the tape recorder, and climb to the rock caves to drink and listen to some Metal, while refreshing and bathing in the sea 😉 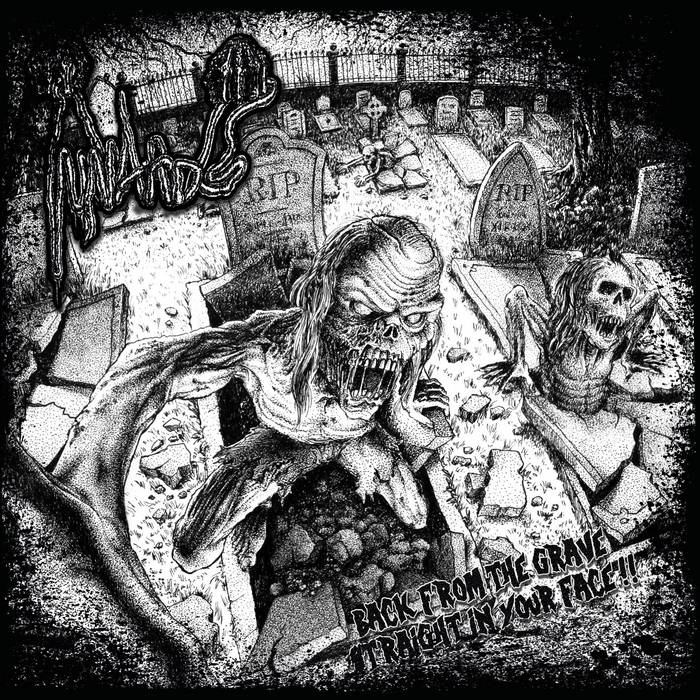 What are your favourite type of books to read?

Got fed up with peanut butter, but love jelly, strawberry, or any berries jelly.

Who is your favourite horror character?

What is your favourite horror movie/story?

What is your favourite kind of dessert?

Do you like to go hunting or fishing? Or both?

Did underwater hunting/fishing from the age of twelve till my twenties. Still like it, but no time or equipment now anymore 🙂

And what would be your favourite food?

Not so much as before, but it still goes well with some food and the right kind of thirst 😉 hahaha.

Thanks again for taking the time to do this interview Hugo, very much appreciated!

Thank you, Robert! I really appreciate your support, and all the interest you’ve shown in my new project, Innards. I wish all the best for you and your Metal Zine!!

Bloody great bloke see, told you! Very prolific as well, the sort of guy that deserves a lot of kudos for all of his hard work, so be sure to check out Innards, and all of the other stuff he has been involved in. Link for the review and all the other usual ones below!