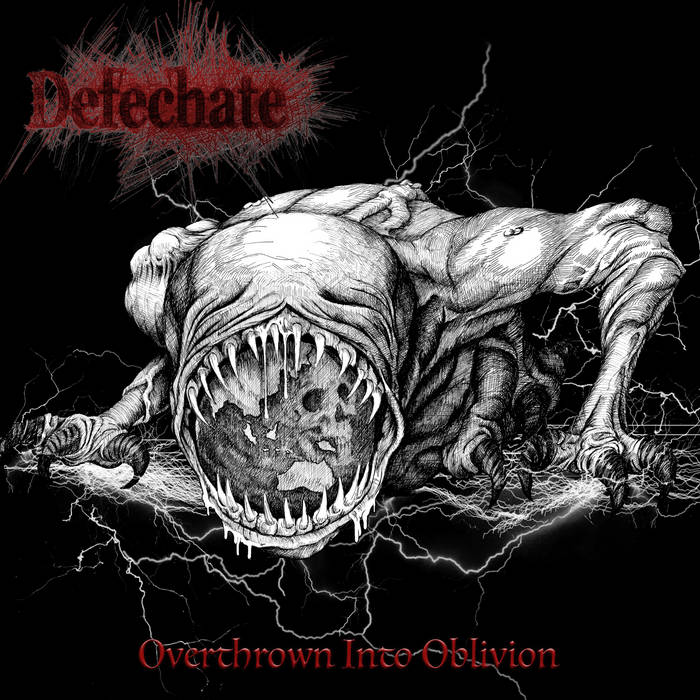 For those not yet enlightened, Italian Death Metal duo Defechate is the latest project from Luke Scurb (Humangled, Suture Messiah) on guitars and synthesiser and Giuseppe Tatangelo (Zora, Glacial Fear, Antipathic, Throne of Flesh and early Humangled) covering bass and vocals, sound wise they draw from their combined musical influences and past works for this new experience which they loosely describe as Death Metal from different perspectives heading in unspecified direction, understandably as this project is very much in it’s infancy with this debut EP “Overthrown into Oblivion“. For anyone familiar with either of Luke or Giuseppe’s past projects the loosest analogy I can offer is Defechate sounds like the quirky musical insanity of Humangled mixed with and the gut-wrenching vocal brutality of Zora.

“Overthrown into Oblivion” is five tracks spanning an intense and brutal nineteen minutes with Luke and Giuseppe being joined by Nephros on drums except for opening track “Electrocution” where Fred Valdaster of Humangled is responsible for the drum battery.

This EP isn’t short on brutality but they do know when to pull back and quieten the mood, these are well thought out and constructed tracks, with a crunchy, dirty delivery and quirky avant-garde element, the vocal delivery is raw and rasping and despite the very experimental and aggressive stance there is a surprising underlying melodic element. From the opener, the raw but catchily engaging “Electrocution” my attention is grabbed. It’s not all full throttle brutality, the title track “Overthrown into Oblivion” has interesting quieter, slightly wistful segments which serve to magnify the brutality of the rest of the track, and “The Pulsing Crust” is even more cleverly eclectic than its predecessors with an organic ebb and flow to the sound.

The tracks which resonated the most with me were opening track, the aforementioned “Electrocution” and the closing piece, “La Morte, La Stessa” with its lyrics in Italian, the title means “Death, the same”, as Luke explains “Death is the same for everyone: doesn’t matter how it comes. The chorus translates to ‘like a queen, wild or supreme, death is the same’ “, it’s intense and slightly sonic but with enough melody to make it brutally engaging. A dramatic EP closer.

Taking into consideration the earlier comment that the duo describe this project and release as “Death Metal from different perspectives heading in unspecified direction” I feel this could be the beginning of something very unique in the realms of Death Metal, we have the merging of two very free thinking musical minds here and I look forward to how this project develops on future offerings.

“Overthrown into Oblivion” is an independent release and available as a CD or digital download from: