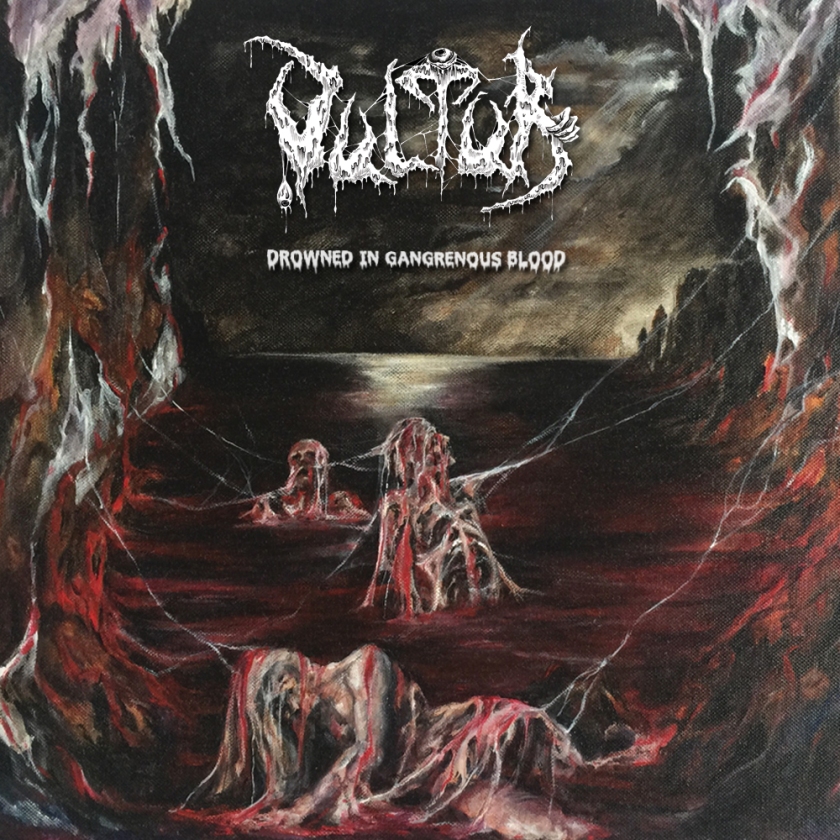 Here are some interesting facts to open up this review with. Firstly, are you aware as to why Vultures (the birds, not any members of this band) have no feathers on their necks and heads? Maybe you do, but for those who don’t it’s a simple question of evolution my friends, for you see, when you have to stick your head inside a large rotting carcass, via any means possible (let your imagination roam free on this one), it is rather inconvenient to have clotted blood and other festering nastiness caked onto oneself for days after. I also presume they don’t shower often, and probably don’t shampoo and condition either..

Secondly, You may or may not be aware that this band contains two members from those other Greek purveyors of filthy nasty Death Metal, Ectoplasma. Yes, George Wolf on bass and Giannis Grim on vocals to be precise. Round them out with George N. on guitar, and Vasilis Tsafas on drums, and here you have Vultur. Reviewing Ectomplasma’s last effort “White – Eyed Trance”, I may have gone on about olives, blood, and slime, and I promise you for this one I won’t lower myself to such ridiculousness…Yeah who the fuck am I trying to fool ha-ha.

Vultur are indeed hitting all the right gory horrible notes on this, their third release “Drowned in Gangrenous Blood”, and that also is an undeniable fact. I suppose the next questions to be answered are do Vultur bring anything different to the table that Ectoplasma hasn’t already provided, and therefore is it worthy of your precious time. The answer is yes you dullard, and a big fat one at that. Assuredly both have similarities, and in this instance that is a fucking great thing. Both will roll over you like a tidal wave of body parts and innards would if your local morgue exploded, covering you in reeking excellence, so much so that you may need to shower afterwards, just in case those birds with the fucked up looking, no feathered necks may spot you and want to insert their heads into places that we shall not speak of looking for a feed.

For mine I find Vultur a far more gritty beast than that other lot, and I find that other lot to be a lot more melodic at times. Vultur just really have the head down, arse up kind of thing going, and relentlessly pursue this ideal with great intent. “Return to Soil” just says ‘fuck you all, we are going to bury you, right here, but please don’t die just yet, there’s more to see’. Title track “Drowned in Gangrenous Blood” is just pure yucky gargling goodness. “Devirginized, Butchered and Eaten” sounds like the kind of tune you want to play at a wedding. Fuck off Maroon 5, we have the new betrothal song for a decade right here. And so on it goes.

What you get here, as with a few of the latest Memento Mori releases, is Death Metal that pays attention to the scene, doesn’t kiss any arses, stays true to it’s roots, with a nod to the future. The purists out there who think Death Metal died in the early nineties would be fools to not have a listen, just as the ones who swarm around certain other bands at the moment who think they are onto the coolest grottiest shit ever would be wise to. Vultur will insert their ugly, bald head into your rectum, and work their way up into your brain. More facts right there. Don’t pick at this, go full on in neck and all!