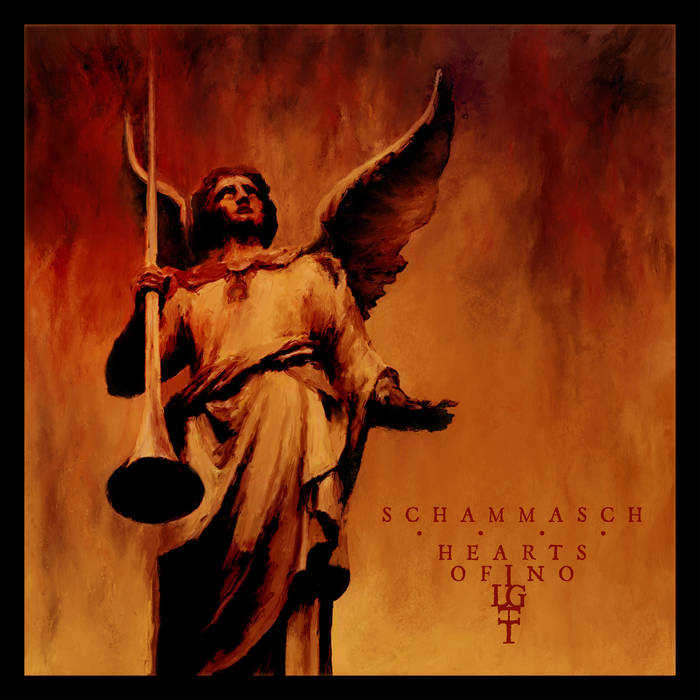 Swiss avant-garde Black Metal band Schammasch are back with full length number four “Hearts of No Light“, following in the fascinatingly unconventional footsteps of its predecessors. It’s Black at the core with a smattering of… well pretty much every sub genre you can think of, even a bit of Rock, but it is all melded so skilfully and organically, with the album as a whole so cohesive that the complexities of this clever meld delivers as a melodic yet darkly powerful and utterly fascinating offering of the highest calibre. Schammasch know how to keep Black Metal interesting.

“Hearts of No Light” is a philosophical and thought provoking offering, esoteric in both its lyrics, artwork and layout, with all aspects of the release very carefully considered and very cleverly composed. The nine tracks span a generous sixty-seven minutes, opening with the hypnotic and reflective “Winds that Pierce the Silence” with its flamboyant classical piano opener, where equally flamboyant guitar repeats and precise drum rhythms are maximised effectively in this instrumental opener.

Next, “Ego Sum Omega” where powerful drum beats and straightforward but hypnotic guitar repeats are balanced against the harsh vocal delivery of this brutal onslaught of a track.

“A Bridge Ablaze” is piano led, with distant haunting vocalisation, a very reflective piece, the calm before the dark storm that is the next piece “Qadmon’s Heir“, where harsh and tortured clean vocals are set over a backdrop of unrelenting riffs and an underlying dark melody with a mid-point drop away that is both reflective and sinister and where haunting repeat riffs are punctuated with ominous drum rhythms and chanting, continuing in a similar vein with “Rays Like Razors” an intense, passionate and complexly powerful track.

“I Burn Within You” has a strong drum leaning bolstering the intense repeat riff, the variance coming from the range of voices implemented within the vocal delivery.

One of the more avant-garde tracks is “A Paradigm of Beauty” which has dark haunting edge and groovy Rock undercurrent and leads alongside a good balance of harsh and clean vocals, a very interesting and catchy track.

“Katabasis” is a slow builder, smouldering and dark, reaching its peak with an intense but hauntingly beautiful wall of riffs layered with  unrelenting but not overpowering drum work alongside an abundance of different voices, fading out and melding with the final track.

You can’t beat closing on a statement and the fifteen minute “Innermost, Lowermost Abyss” is definitely that, in both duration and content, an ‘exotically arty’ and reflective piece encompassing classical styled acoustic guitar alongside subtle soundscapes and exotic rhythms, gently ebbing and flowing, drifting into a very extended fade out which had a final push of noise before almost silence, save a few ominous distant beats,  it’s one of those pieces that just leaves you wondering……

“Hearts of No Light” is definitely worth a listen and more, a sophisticated and powerful album, and is out now on Prosthetic Records.