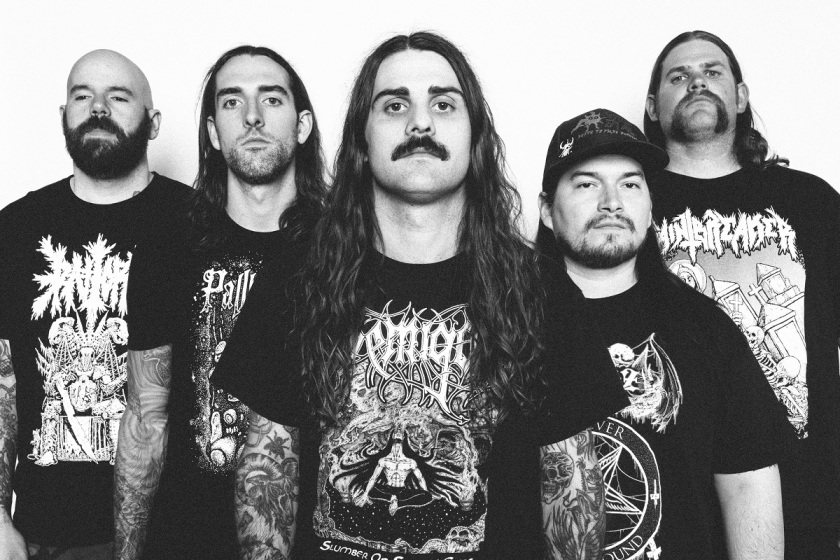 This past year has been a great year for Metal especially Death Metal. A quick glance at our reviews in recent months will demonstrate it. At the start of this month, one more release got added to the list, “Deserted” by American Death Metal act Gatecreeper. The band play a potent blend of 80’s Florida and 90’s style Swedish Death. We spoke to front man Chase Manson about their sound, “Deserted” and more while he was touring Europe with Spirit Adrift.

Hi Chase, we are a couple weeks away from the release of your second album, “Deserted“. How does it feel?

Before we get into the new one, let’s talk a bit about your sound. The band has the sweet spot between 80’s Florida and 90’s Swedish Death Metal. How did you arrive at this sound?

It’s just stuff that we like and incorporate them together.

What were the bands or albums that inspired your sound?

“Deserted” is a cracker of a release. Tell us a bit about the album.

We wrote for probably a year in between touring and things like that. Since this is our second full length record, this was the first time that we were able to sit down and write an album as a whole. Our first full length Sonoran deprivation, some of those songs were written when we first started the band. And it was kind of a progression, we just started writing songs when we started the band, because, you know, we needed to have new songs. So we just kept writing songs and then eventually, it’s like, we have enough songs, so let’s make an album.

For Deserted it was, we’re going to write a full length album so the songs are specifically for the album. We looked at our last record and saw, I wish we could do more of this, I liked these parts and let’s kind of expand on that. It’s a lot of stuff, same ingredients, there’s a couple new flavours in there, but it’s the same ingredients. I think we’ve gotten better as a band. So it’s just a better version of what we’ve already been doing, or the best version of what we what we’ve been doing. 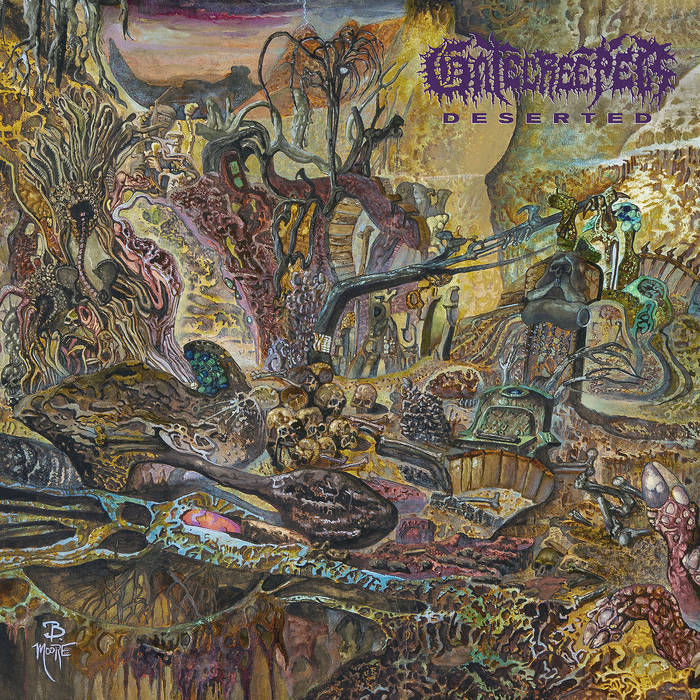 The album ends on a Doomy note with “Absence Of Light”, similarly to “Grotesque Operations” on “Sonoran Depravation“. Was that intention or a coincidence? Is there a reason behind it?

No, that’s very intentional. I like ending the record slower. Actually, our first record, which was a four song EP, it kind of had the same thing at the end to have a slow doomy song and kind of fades out at the end. I think it’s a good kind of outro, I see it as kind of like fading to black at the end of the play or a movie. It’s a cool way to finish off our records, so it was definitely intentional to do that on this one as well.

The album cover art by Brad Moore is psychedelic. What was the idea behind it?

I worked with him for probably about six months to get the album cover done. I searched for a while for someone that I wanted to do a full colour painting and hand painted artwork. Once I came across his work, I knew that he was the guy and contacted him.

I told him, we hadn’t recorded the album, I’m not sure if we’d had even finished writing it. But I knew what I wanted and I knew the album title. So I gave him the album title Deserted, and I kind of gave him a little bit of colour palette, what we were looking for, and that I wanted a landscape, a desert but very apocalyptic and post human. So I let him run with that. And I think that his view is definitely a more psychedelic one, the post-human stuff on there that maybe looks almost alien. Being the post human earth or whatever, it could mean a lot of things. So I kind of let left that open to his interpretation and I think the result is really cool. It’s really a striking image.

I described your music to a friend as ‘Drinking Death Metal’. What beer/alcoholic beverage would go well while listening to “Deserted“?

I think just something that’s easy like a cheap beer not a craft beer, not an IPA, just like a Budweiser. I don’t know, something easy that you just you can drink 30 of.

How do you manage your time between Gatecreeper and Spirit Adrift?

I mean, I think we play different roles in the bands and it we will be different in the future as both bands progress. Right now there’s an overlap of members but the songwriting and creative wise is still separated. For Gatecreeper, I’m one of the primary songwriters, and creatively, it’s a lot more my vision, and there’s a lot more responsibilities artistically. In Spirit Adrift, I get to switch modes, and I just get to play. I don’t have to write the songs and don’t have to be in charge of a lot of stuff, I can just have fun and play along. I do think that subconsciously it bleeds a little bit, learning how to play the Spirit Adrift songs might, because I’m a self taught musician will expand my musical toolbox a little bit. But as far as time management, it’s just figuring it out in it in your home life and being able to compartmentalise a little bit. Also learning how to not burn yourself out and delegating different responsibilities so that you don’t have to do everything for both bands.

What are your thoughts on the current revival of vinyl records and cassette tapes in this digital age?

Yeah, I buy records and tapes too sometimes. I think that a lot of its it’s easier to listen to music streaming on Spotify either on my phone or in the car, I can listen to it on headphones while doing something. But there’s nothing better than the vinyl format and having the album art, 12 by 12 inch album cover to look at. It’s the same cover for CD I mean, the bigger, the better. If it’s cool album art, to see it up close and hold it in your hands, the vinyl sleeve sizes, I think it’s really great.

So if there’s a record that I really like and I probably listened to it on Spotify or Apple Music often, I’ll still buy that record just so I can have and I can look at it or listen to it on the turntable when I have time to do that. But as far in an artistic sense, individual sense, there’s something to be treasured about having a physical copy of it holding it in your hand.

What are your favourite releases from recent times?

There’s been a lot. I think metal right now is as strong as it in a long time. I don’t think that there’s a lack of new metal. I think that it 2019 has been one of the strongest years we’ve had in a long time. And I feel like we say that every year.

What’s currently on your playlist?

While writing or touring and playing metal, I kind of will gravitate towards listening to stuff that isn’t metal. I’ve been revisiting a lot of stuff that I liked when I was younger like in junior high. I liked a lot of indie/emo like Jimmy eat world who are from my hometown in Arizona. So when I was younger, there was a whole scene, house shows and all. you would call it emo now, or back then it would be called emo. But I think that later on, on, the word emo kind of got taken over by My Chemical Romance or Fall Out Boy or something, which is not something that I’m into. So I’m hesitant to say the word emo but that’s, that’s what I would describe it as what I would like. I do listen to a lot of hip hop, Memphis hip hop like three six mafia. I try to mix it up because at a metal show if the sound guys playing metal in between the metal bands, it kind of gets old after a while. So if I’m getting in the van listening to to music, I’m going to usually try to listen to something that not metal just so it I just don’t burn myself out.

You are touring North America with Exhumed, Necro and Judiciary. What are you looking forward to at the shows?

I’m looking forward to playing our new songs live. Except for sweltering madness, which is something that we had written before and released as a single, most of the songs on the album haven’t made their live debut on tour yet. I’m excited to play a lot of those songs live.

Do you have any more shows or a tour planned?

As far as what’s announced now it takes us towards the end of the year. We’re starting to plan out next year, we’ll do some more US touring, we’re going to go to Europe, hopefully play some new places that we haven’t like Japan, Australia, Southeast Asia and South America. With this new record, we’re trying to take it to a new level. So hopefully next year we’ll be all over the planet.

Many thanks Chase, the album is indeed a great thing, and we thank you for your time. Any decent fan of Death Metal or just good music in itself should be all over this.