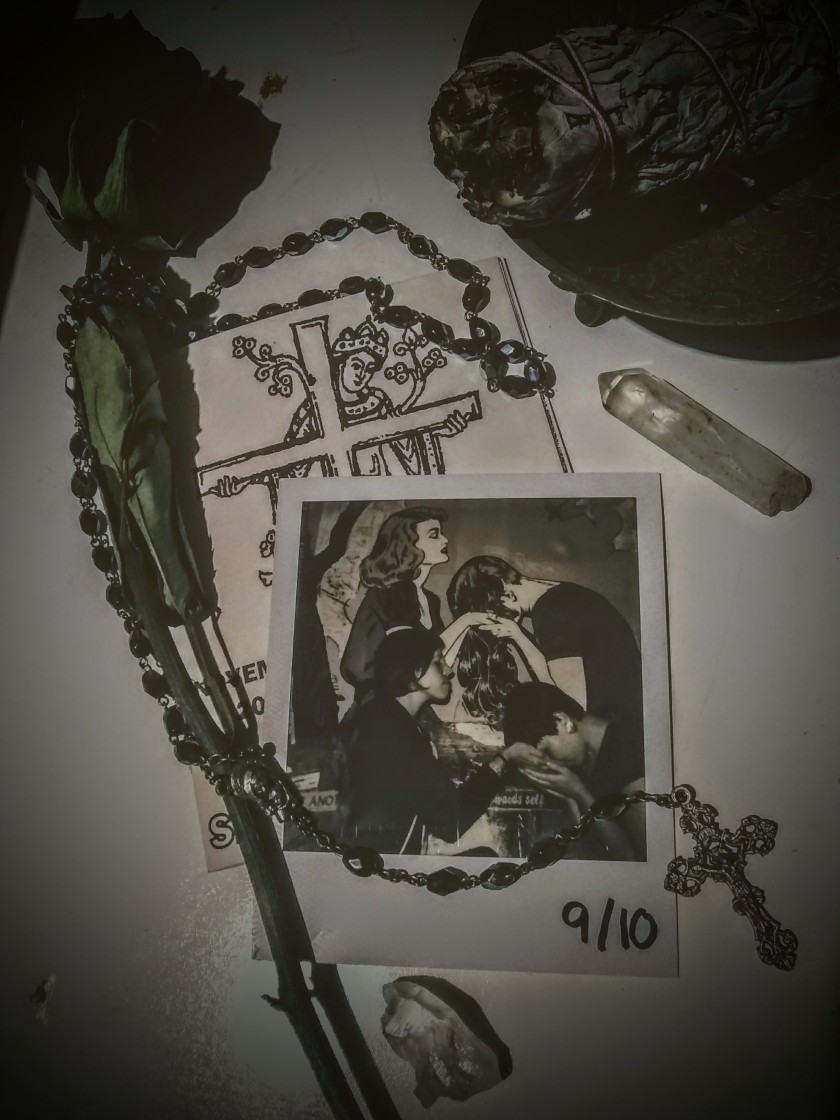 This past Tuesday I was fortunate enough to witness a stunning, heart-breaking, and trying performance from Lingua Ignota. Below I will attempt to put into detail how Kristin Hayter, the woman behind this musical upheaval, captivates an audience with her remarkable voice and anthems of retribution, trauma, and hell on earth.

Deluxx Fluxx, a somewhat newer venue, is found tucked off to one side of Detroit’s Belt Alley. A room of black and white with a corner outfitted in stretches of neon artwork lit by blacklight. Squares of light dimly cast down upon a crowd scattered between pillars of concrete. I made my way down into the venue to find that I sadly had missed half of the opening band’s set. Vile Creature, an anti-oppressive sludge metal band from Canada, consists of drummer Vic and guitarist KC. The venue was trembling when I walked down toward the stage. Drenched in red light and backlit by blue, this duo really gave the audience everything they’ve got with their insane vocals, heavy-handed drumming, and guitar dipped in a crunching fuzz. Splitting singing roles between one another, both band members proved to have some absurdly sturdy voices to match their atmospheric black metal soundscapes. Their final song was “Harbinger of Nothing.” KC made a guitar loop and went to take the place of Vic on the drums, while Vic got up to take place at the front of the stage to sing the latter half of the song as a focal point, ending their set with a hard-hitting demand of “Tell me who I am.” They mentioned that this was their first time in Detroit, so I’m glad to have been able to take part in this little milestone of theirs. 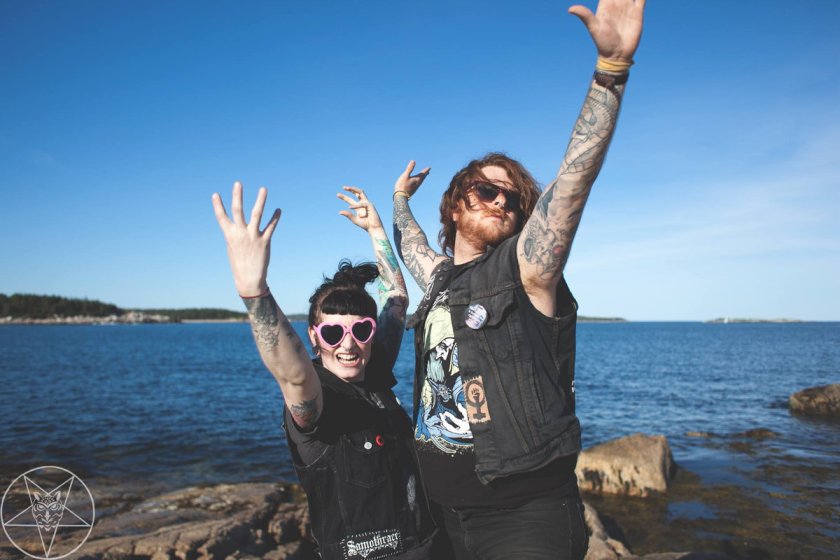 Shortly after Vile Creature abandoned the stage, Kristin Hayter stepped out from behind a sheet of plastic hanging in front of the stage to stand at a keyboard decorated with white flowers, a cross dangling from her neck. Backlit by a single light, she began to pick up “DO YOU DOUBT ME TRAITOR” at its emotional peak, her impressive lamenting over the repeated pressing of deep keys. She is right there on the floor with the audience, immediately thrusting us into a state of vulnerability. The crowd shuffling with anticipation or discomfort. Without a separation between her and those of us taking our place in the audience, this show is intimacy at its most fragile. “Caligula”, released July 19, is already an album fairly sparse with instrumentation, so that minimalism truly seemed to translate well into live performance. The songs performed did feel a bit more stripped down though. Just Hayter, a keyboard, and a laptop providing a few backing tracks. Hayter really made use of her audience. Walking among us with a light, throwing tall shadows against the wall, and setting every last one of us on edge. She sang the final words of “BUTCHER OF THE WORLD” with so much tangible distress and dejection that I thought the foundation of the venue would crack before her. Her words, “May another steal what you stole, steal what you stole,” rang out, floating around the chiming of her keyboard like sad bells. From this, we quickly entered into a rendition of “MAY FAILURE BE YOUR NOOSE.” The piano intro a touch swifter than the studio version. Hayter’s repeated asking of the questions, “Who will love you if I don’t? Who will fuck you if I won’t?” forced its way into the audience to linger and make uncomfort within the crowd. This song put a lump in my throat and pin-pricked my eyes to bring a few tears to the surface. Hayter treated the words in “FRAGRANT IS MY MANY FLOWERED CROWN” with so much delicate care. Without the layered vocals, this song really seemed more like a personal address than a dramatic lamentation. When I heard her let out the words, “All the love God would allow, but all God’s love means nothing now,” I thought my body would splinter like a weak slab of wood bearing the pressure of me holding in my quivering sobs.

From the live performances I have watched online, I knew Lingua Ignota’s voice would be capable of holding up to her studio albums, but actually seeing her sing before me still put me in a state of shock. Her vibrato wavers with so much ease like a white flag bending and twisting within a gentle breeze, and also burns with so much ferocious intensity that I was afraid to stand too close to where she stood. Her voice is a weapon she knows how to fire. “IF THE POISON WON’T TAKE YOU MY DOGS WILL” was yet another jarring song to witness. The introduction alone is frightening with her swooping vocals singing, “Kyrie Eleison!” Her voice so captivating ensnared all of us in her words, “All this, all this is meaningless without me.” The crowd stood still as stone with the exception of a few swaying along in her lyrics. She snapped out the words, “Make worthless your body so no man can break it,” like a snarling animal, foaming at the mouth. She reintroduced the crowd to “DO YOU DOUBT ME TRAITOR.” This time from the very beginning. This song was the undeniable peak of the night. Hayter’s shrieking questioning of “How do I break you before you break me?” completely missed my ears to hit me square in the chest and I was ready to collapse right then. When the music progresses into the section of her wailing,

“When all this is ended

As cruel as I am

Remember how I loved you

But that nothing, nothing can stand…,”

I felt as though this part of the song brought me out of one heart-wrenching daze and right back into another. Her operatic voice, edged with her sharp sneers and tinged with retching desperation, seemed to be an actual entity floating among the crowd.

“My friends all wear your colors

Your flag flies above every door”

In front of me a member of the crowd swayed from left to right, trance-like. A few more scattered throughout the crowd moved as if caught in the currents of the pulsing beat being pumped out through the overhead speakers.

“But bitch I smell you bleeding

And I know where you sleep”

From across the room, I spotted a man nodding his head very, very slowly, as if he were underwater. The scene before me and the deafening sound of Lingua Ignota’s wails and the upheaval of throbbing beat made everything feel unreal.

“Do you doubt me traitor

Throw your body in the fucking river

We were standing at the centre of an earthquake. The waves lashing out, knocking us off our feet.

Though I was simply a member within the audience, Lingua Ignota’s performance was incredibly taxing on me, and I can say with absolute certainty that I am not the only one who left the show feeling that way. To have her allow a small crowd complete, uncensored access to a display of doleful cries and heart-wrenching expressions of grief was really a special moment in time for me, and one that I will clutch closely to my heart. It was impossible to not be emotionally invested in this performance. No one clapped until the very end, and the respectful silence of those around me and the stifled sniffling of many remains in my mind a poignant reminder that the majority, if not all, of the crowd was there witnessing great sorrow and heartache. Having these songs performed without any additional frills made them feel so much more personal, and the whole set was incredibly stirring. From me, there were expectations of a violent intensity to the show, but what it really turned out to be was a genuinely touching performance. After the show, the crowd began to disperse and I collected the group of friends I brought with me. One wiped black tears from beneath her soaking lashes, while another went to bestow a sweetly smiling Hayter with a Polaroid picture he had taken of her. We could all agree that we were unsure of how to feel after the show had come to a close, but could say with absolute certainty that the performance was overwhelmingly cathartic. 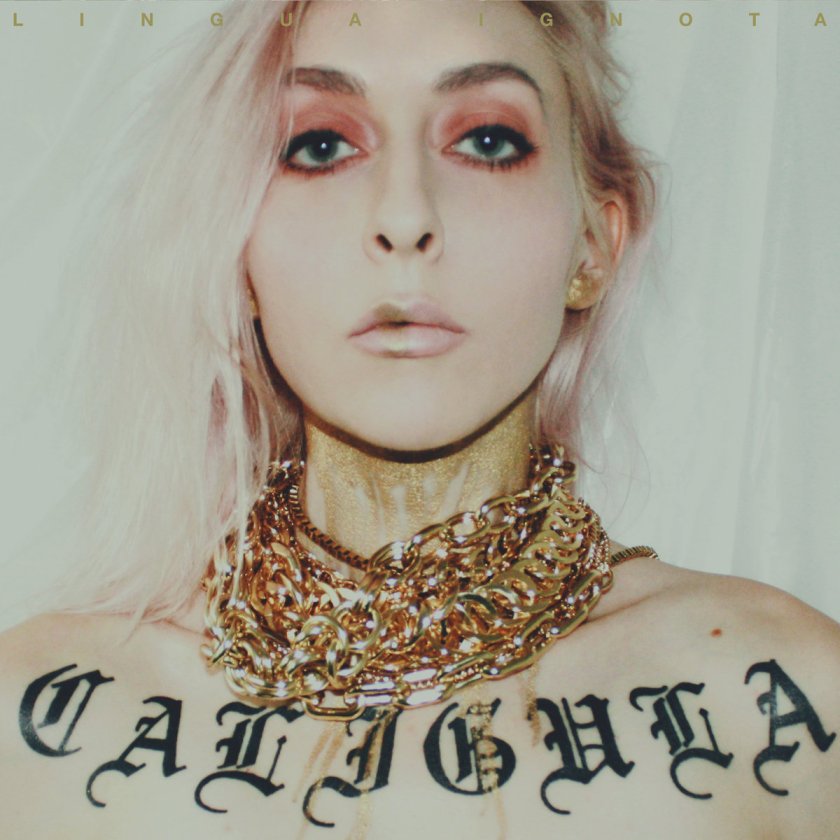 Recommendation: I cannot praise Lingua Ignota’s live performance enough. I was definitely expecting an emotionally intense show, but I was not expecting to have her slice me in two with her words so tenderly sung, gently carve out my pained heart from deep inside, and then cradle it in the palm of her hand. If she is coming to a venue anywhere near you, I highly suggest snagging a ticket and stocking up on waterproof mascara and pocket-sized packets of tissues. I will forever continue to get teary-eyed whenever I call memories of this show to mind.