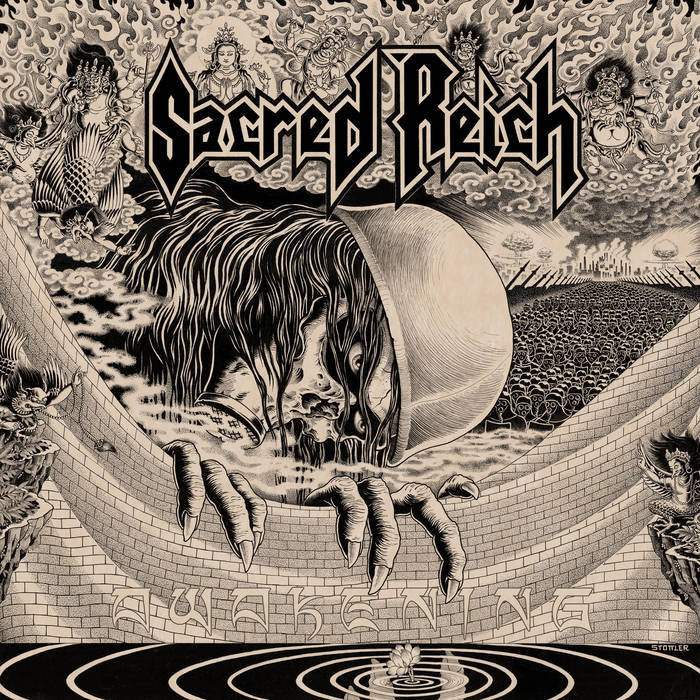 A Pig and a dude walk into a bar, and the bartender looks them both up and down and says, “Why the fuck did you just walk into my bar”, and the dude looks at the Pig, and the Pig makes some sort of grunting noise, and they both say, “Well because we are thirsty. Duh.” Yep, that’s just the kind of shit joke we deal with around here at The Metal Wanderlust, not to mention the fact that we have a talking Pig, and his name is Mr. Swine, and we love him. He is quite the clever little oinker too, so if you have got the idea that we have a talking Pig, that does music reviews through your scone, then all will be fine, and we will let him oink first before The Great Mackintosh brings his usual brand of whatever the bloody hell he calls writing to the table, with this joint review of Sacred Reich‘s new one, “Awakening“. No more bad jokes, I promise.

Sacred Reich (the proverbial upside to Vader’s “Morbid Reich”. Vader got the downside. See, there’s two sides to every Reich…) have returned with their new album “Awakening”, their first since 1996’s “Heal”. Not only that, but the band is sporting some new blood …well, sort of, some of it is new-old blood. Former Machine Header Dave McClain has come back on board for his second stint on the drums, once again replacing original drummer Greg Hall; and Joey Radziwill has taken over for founding member Jason Rainey on rhythm guitar. Of course, singer/bassist Phil Rind & longtime lead guitarist Wiley Arnett are still holding down the fort. So how does “Awakening” stack up against the Phoenix AZ Thrash Metal titan’s classic albums?

Umm…..I don’t know. Full disclosure, I’m not really familiar with the bands past work. I remember seeing the video for “Independent” on MTV when I was a young teenager, but that’s it. See, when that album and song came out in 1993, I was already moving away from Thrash/Speed Metal and into the more extreme sounds of Death Metal and Grindcore. I thought they were good, but I wasn’t rushing out to the record store to get their stuff. Usually I go back and listen to past albums that I might have missed so that I could inform my reviews, but I have decided not to do that this time. Instead I’ll judge this album based on its own merits, and not the band’s past glories. So let’s dive into it, shall we?

If “Awakening” has shown me anything, it’s that not checking out the band during their 90’s heyday was a big mistake! Kicking off the album with the title track, it’s immediately apparent that Sacred Reich is hungry to show the world that they can still kick some ass!  The song is infused with an energy and urgency that draws you in instantly, and just when you think it can’t get better, they drop some serious grooves on you. If the last minute of this song doesn’t get your blood flowing, you could legally be declared dead. “Divide & Conquer” continues the Thrash Metal onslaught, and lets you know that they have not eschewed the socio-political commentary that the band was known for. “Salvation” slows things down a bit for a pummeling mid-paced stomp, and “Manifest Reality”continues along that same tempo for its first minute, before revving up the speed again.

There is unfortunately one dud in the bunch, the flaccid and unremarkable “Death Valley”, which changes course from the feisty Thrash-grooves we’ve grown accustomed to by this point, and hits listeners with radio-friendly (by Sacred Reich’s standards) Hard Rock. I suppose it’s not a terrible song; it still gets stuck in my head as much as the others, it’s just aesthetically so different from the rest of the album. But if radio-friendly is your thing, it may be a highlight of the album for you. Considering that it is also the longest song on the album, I see myself skipping this one on all future listens.  As if the band was seemingly aware that “Death Valley” drags the album a little bit, the next song, “Revolution”, course corrects in a major way, being shortest song on the album and bringing in some much needed Punk/Hardcore energy.

”Awakening” is a short, concise eight tracks, with a running time of just over a half hour, so it is finished before you know it. While the album as a whole is a little bit formulaic, the songs are filled with enough hooks and oomph to more than make up for it.  One lacklustre track aside, I loved the album, and recommend it to anyone looking for some highly enjoyable 90’s Thrash nostalgia.

So again the beauty of letting people go first shows what a wonderful thing it is, and again my learned colleague here, Mr. Swine has pretty much done a lot of the leg work for me, saving me having to explain a heck of a lot. Basically I was already deeply into the whole Thrash Metal thing by the time Sacred Reich’s “Ignorance” was released, but even with some damn stiff competition from the likes of Metallica, Anthrax, Slayer, Flotsam and Jetsam and so on, Sacred Reich where an instant attention grabber. “Ignorance” went against the usual grain of a lot of the current realm of topics, Satan, religion etc and went for a more political stance, and even if you didn’t happen to be an American (which I most certainly am not), it was pretty easy to pick up what they were putting down.

Phil’s vocal delivery had an incredibly serious tone about it, and you could damn well believe that he was passionate about the message he was trying to deliver, and the picture he was painting about the failures of the governments of the day was a very clear one indeed. Roll onto “Surf Nicaragua” and the sentiment continued, and if at that stage you where ignorant about some of the stupidity on display in the world, you weren’t for long if you cared to listen and then maybe look into things a little more closely. This one also contained their cover of Black Sabbath’s “War Pigs”, and as well as being true to the chosen subject matter of the day, this also gave me an insight into the fact that Phil and co may very well have been big Black Sabbath fans. Nothing unusual about this, most Metal heads around at the time got right into them, hell for us old farts they where the springboard that we used to get into more extreme types of Metal, and certainly they had a very wide ranging influence on most bands of the time, still do for that matter.

“The American Way” then came along, and the themes continued. Classics like the titular one, with it’s catchy lyrics – “Lady Liberty rots away, no truth, no justice, The American Way” combined with an enormous bouncy groove where very hard to get out of the head. “Who’s to Blame” asked the hard questions about parental responsibility, and it and Acid Reign’s “Thoughtful Sleep” would continue a dialogue that was highly prevalent in the Metal scene at the time, was music responsible for people taking their own lives, which of course it isn’t. Many a band would be dragged before the politicians and do gooders to explain themselves, and eventually the good guys, that being us, won the day.

“Independent” and “Heal” would follow, and although they never reached the lofty heights of the first few, and the band seemed to almost mellow somewhat, as was the fashion at the time. Yet they are still fantastic releases and very worthy of your time if you aren’t up to speed with these guys. People came and went, periods of inactivity would occur, the music world was inflicted with the Grunge period and Metal took a back seat, and then as all things do the winds changed, the tide came back in, and here we are back in a marvellous time to be alive for the Metal fan. Having been along for a large proportion of the ride I for one can surely attest to this, cos I’m bloody old..

So why do I mention the Black Sabbath bit earlier? Well for starters, again at least to me, I can hear a large portion of their influence in this album. Straight off the proverbial bat this one grabs you by the short and curlies, and I found myself standing there with a big grin on my face and saying “yeah man, they are back”. As with any of the latest releases from the big guys of old I always reserve my thoughts until one whole listen, and as with all of the big guys this year they have proved that heading back towards one’s roots is often the best way to go. Possessed, Destruction, Xentrix, many more, seem to have remembered just precisely what it was that made them so brilliant back in the day, and are applying it in spades. All of these mentioned have had periods of change in their delivery, some good, some not so good, but it would seem that by going back and having a damn good hard look at themselves they have rediscovered the passion, the fire that they first used to blaze a path into our minds way back in the proverbial day.

So I’m gonna say that this album is very aptly named. The guys have well and truly had an “Awakening” of sorts, by going back to what they do best, and that is playing a damn fine brand of Thrash Metal that is, in my humble opinion, very well laced with references to the classic bands of old, one of them being obviously Sabbath. The main song that made me look even closer and bend an ear more than usual to come to this conclusion was “Salvation”, where Phil’s delivery is decidedly Ozzy- ish to say the least, not to mention some of the riffs that are rather Iommi – esque to say the very least ha-ha. And what a cracker it is.

Then “Death Valley”, which I have to agree with my piggy brother Mr. Swine is most definitely radio friendly sort of sealed the deal, and then I looked back at their earlier stuff and a stupid grin spread across my stupid face, because the pennies had dropped, to coin a phrase, and I looked upon the whole thing in a different light. Their whole career it was right in front of me. Yes this is a load of waffle, but it’s my waffle, and sometimes it would seem to take me bloody forever to figure things out, but I get there in the end. Going back to your roots seems to be the way, and there are some absolute ball tearers of songs on this album don’t get me wrong, and the whole thing just works on so many levels.

Like my brother in all thing’s piggish, I now sit more comfortably in other genre’s, well mainly Death Metal or Doom/Death, but I am going to have to say that seeing a lot of these bands from back in the day bring back the oomph is making me smile a helluva lot. And if I say roots one more time, please let Mr. Swine bite me on the kneecap before Sepultura get to me first…