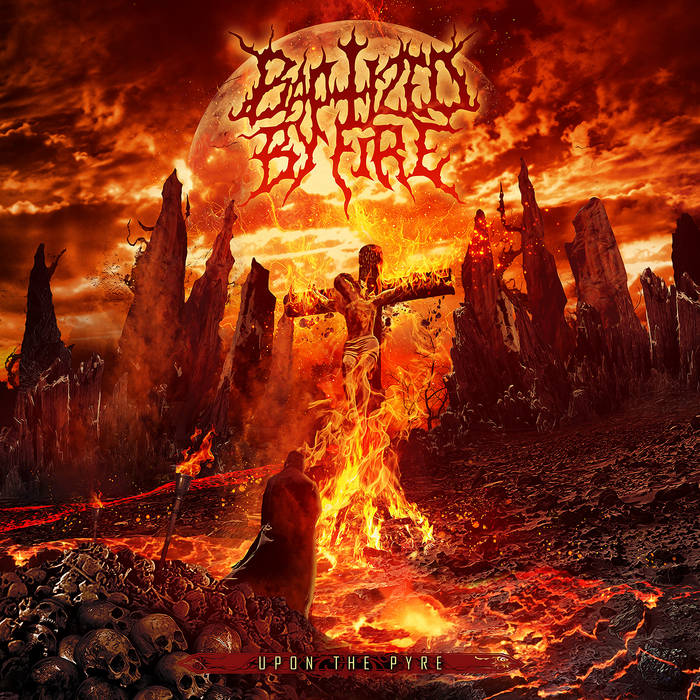 Cowboys, shootouts, saloons, and damsels in distress are all things that I think about when anything about Texas gets brought up. The Lone-star state is rooted in deep in the history of the United States, and what has emerged from there in recent memory is the amount of fucking awesome Brutal Death Metal from the area.  Not that it’s a totally new thing with legends like Imprecation, Absu, and Rigor Mortis. Texas is already solidified in the game but the new blood is carrying the torch and holding it VERY high with bands like Frozen Soul, Malignant Altar, and the band we’re gonna be talking about today Baptized by Fire!

Although not completely new to the game, Baptized by Fire consists of members from Uncleansed, Infernal Dominion, Imprecation, and Cerebral Rot, so seeing bands like that you know you’re in for a good time. And goddamnit wouldn’t ya know it, these fucking guys can RIFF. The opening starting with an ominous transmission that sets up the whole album perfectly. A non stop transformation into an evil being the more it plays.

After starting the transformation you are thrust, “Upon the Pyre” with a sinister clip from Pumpkinhead (1989) and fully into your new body it all sinks in. Seething with menacing vocals and drums that sound like there wouldn’t be a kit left after one song, and riffs that make you want to bang your head straight off your body. There is no fucking filler here, the guys seamlessly moving from song to song, the flow and pace of the album is perfect.

And now we start, “Into the Fires of Phlegethon” straight into the “Ritualistic Burning of the Dead”, it’s the middle of the album where the groove really starts to pick up. Blasting you in the face at the start of both of these the unrelenting riffs never cease, and like I said before there’s no filler here. They are a mean, brutal, and face melting trips to the depths of hell. If you don’t head bang to the riff at 3:10 of,  “Ritualistic Burning of the Dead” then you can just go away.

Closing out, you are “Emulsified” into a pile of mush. Crushed by the weight of the riffs with the kick drum pounding your bloody pulp into the ground there’s no escape. Only anguish and despair to end it. You finally meet your maker, the, “Masticated Savior” who spits your mushed pile of a soul into the fiery lake to rot and burn forever. A great way to end this sinister slab of death.

Be Baptized by Fire right here!