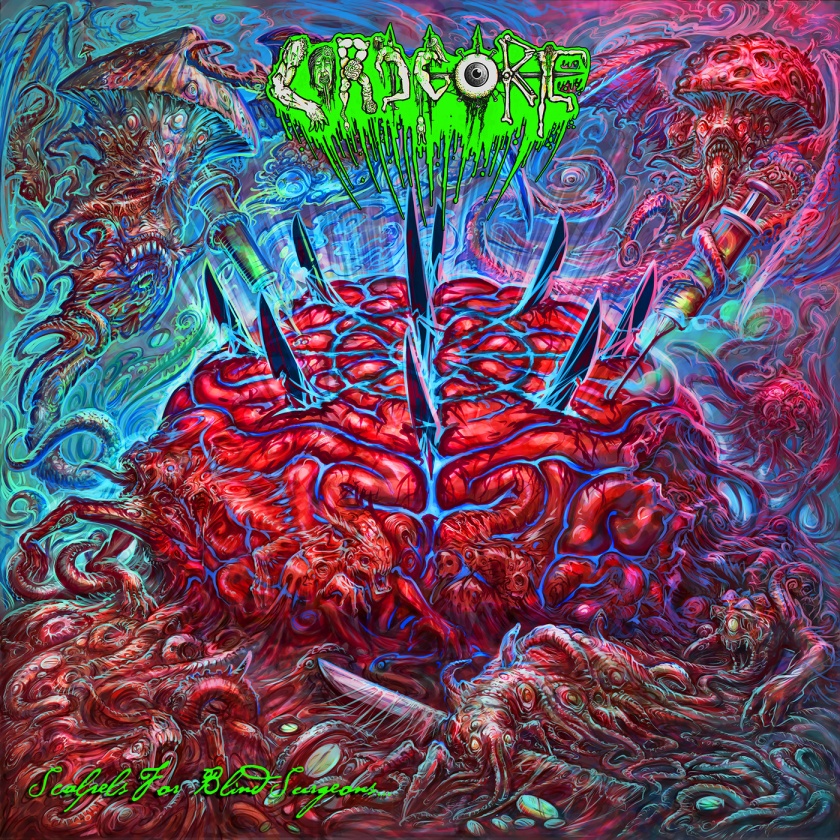 It doesn’t feel like it, but I have had a long history as a fan of Lord Gore. As someone who was born, raised, and lived in Portland until my mid-30s, I’ve been a fan of them ever since “Dark Lords of the Cyst“. Although I never owned an original copy, I did have an incredibly bad copy of it on CDr. Back then, I always dreamed about seeing them live, but they were always out of my reach. I was under 21 and they always played the 21 and over bars. I assure you that it was all worth the wait, because the first time I saw them was a very important show.

Would you believe that it was Hawaiian shirt night at the bar, and they are such fantastic personalities that they played their set in Hawaiian shirts? No? Fuck off then, because it happened, and it was fucking amazing. The second time was an album release show at the infamous Sabala’s Mt. Tabor (to date my favourite Portland venue) with Engorged, celebrating either the “Where Monsters Dwell” or “Resickened” release, and it was a full-on gore assault, which I suppose is what they’re known for. After attending every show I could for the next couple of years, buying all of the merchandise they had and even sporting a Lord Gore logo decal on my car, I was very disheartened when I discovered that they succumbed to the infectious putrid rot of Portland and decayed away into nothingness.

Keep in mind that although Lord Gore had recently released “Cronenberg” with the killer Headsplit Records prior to this album (which featured 3 songs that are also on this album), this is their first full-length album since “Resickened” and as such I am treating is as an entirely new entity.

With the insane rise in popularity of Death Metal as a whole, and Portland becoming a hotbed (or spewing volcano) for a heap of the best Death Metal bands in the world over the past several years, it seemed only logical that Herbert West would discover the remains of Lord Gore and drag their filth-ridden, disease-incubating carcass to his sanctuary to bring them back to terrorize society. He did a great job, as always!

Going into this release, I was worried that the current trends in Death Metal would diminish what Lord Gore is capable of (a fear I often have with long-dormant Death Metal bands), but my worries were quickly annihilated and replaced with a very enthusiastic excitement. Not only does this album sound like Lord fuckin’ Gore should sound – genetically splicing Repulsion-with-Autopsy-with-Impetigo and incubating it within a sickly shell of their own distinct sound and style – but Gurge maintains his unique guttural tones that make him one of Death Metal’s best and most unique vocalists. I was worried most of all that his gurgles and inhumanly low growls would be ditched in favour of a more mundane approach, and if you have a similar worry, you can forget about it right now. This band may have spent about a decade decaying in the gutters, but they sound as refreshing as ever.

Songs on this album have a good variety of length, blending swift assaults and slow torture equally. The second track, “The Deformer”, is interestingly the longest on the album at six and a half minutes, which could be a risky move for a band, as there is potential to wear the listener out too soon. You wouldn’t even notice the length of the track, however, due to regular mutations. The pacing of each track is balanced perfectly, and if “Scalpels for Blind Surgeons” were a restaurant, it would make Gordon Ramsay defecate himself and quit the business. He was too weak to serve long pig anyway. Fuck off now, ya lousy cunt!

If that isn’t enough for you, I especially love how the album title translates so well to the music on the album. Take a minute to really think about it: blind surgeons, which in itself are quite sadistic, being given scalpels. Not feeling anything yet? Bah! You’re trying too hard to act tough. Try putting yourself in a scenario instead.  Follow along now…

You were low on cash, and needed something quick to pay rent. It’s become financially impossible to live on your own anymore. Thanks to the recommendation of a street kid, you find yourself in an old warehouse of the industrial district. The smell of mildew and mold from this derelict building permeates your nostrils. It’s an acrid stench that almost stings, but is soon overtaken by the smell of alcohol from sterilizing wipes. You focus on your comfort, or lack thereof. Lying on a stainless steel table is more uncomfortable than you could have imagined. No wonder they only use these for corpses. A sudden fear washes over you as you realize these tables are indeed used for corpses! You feel a slight poke in your abdomen and soon feel weightless. That must be the morphine. You forget about your discomfort and the table; allowing the glow of the surgical lights to wash over you.

“We should start with the kidney”, you hear one surgeon wearing sunglasses whisper almost indistinctly to another surgeon, this one with soulless white eyes. Perhaps you can take solace in the fact that if they actually are surgeons, then they must have went to school and obtained their doctorates. Surely they know what they’re doing.  How bad could it really be, right? Probably bad, but you chose to spend your paycheck on booze and obscure Grindcore albums instead of paying your rent, and there’s no going back now. You feel a slight pinch as an incision is made on your chest, and you are pretty sure that it’s nowhere near where your kidney is. You don’t think you should be feeling anything, but are too drugged to move or say anything. You feel another incision, this one on your thigh, and it hurts so much more than the last. You feel yourself screaming in your mind, but your physical presence is unable to portray your panic.

“Have you found the kidney yet?” the surgeon with sunglasses asks with a guttural whisper. “Mmmhhhhahaha!” the surgeon with the white eyes quietly responds in a sinister manner, as you feel a long slit form from your lower rib to your stomach. You’re fairly certain that the scalpel scraped against your ribcage and you desperately want to get up and leave, but you can’t. There’s no way that you can react. You can only think. The surgeon with the sunglasses barks something incomprehensible and seems to become agitated, making three incisions in your torso. Simultaneously, you feel the surgeon with the white eyes try to insert her fingers in the incision that she made along your stomach, but she is unable to, so she starts poking her scalpel in the general area where the incision is made. You’re not sure she ever connects with it, but she keeps trying, and you keep screaming in your mind.

Eventually, after some rather disturbing chatter between the surgeons and losing count of the number of incisions felt while you drift in and out of consciousness, you feel a tug from your stomach. You hope they finally found your kidney and you can get to a real hospital before anything gets infected, or worse. “I have something!” shouts the surgeon with the white eyes, and you feel too many organs being pulled and rearranged.  Something isn’t right. You see the surgeon lifting out and pulling intestines at an arms length above her head, silhouetted clearly by the surgical lights. She won’t stop tugging, laughing maniacally as you cry to yourself in your mind and black out, possibly from shock, for the last time.

I hope that little story helped summarize just how enjoyable this album is. It was simply inspired from the album title and a summary of the music on “Scalpels for Blind Surgeons” as a whole. The individual songs will do a great job at giving you an uneasy Cronenberg-meets-Lovecraft-meets-Carpenter feeling with an obscene amount of headbanging and need to destroy everything around you in an entirely reckless manner. Don’t wear yourself out too quickly, though. You’re going to want to replay this album a lot, often back-to-back.