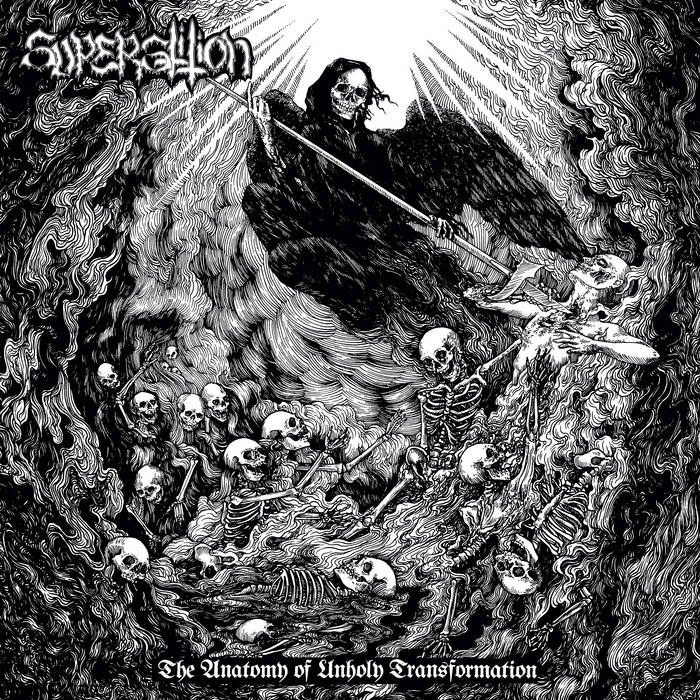 The term that is driving me crazy these days is “OSDM revival” I hate that term for 2 huge reasons.

2). It disparages all of these absolutely fucking sick bands putting out solid albums right now.

And I’m here to tell you that Superstition’s full length debut, “The Anatomy of Unholy Transformation”, is among one of the best of the year and one of the best debut albums in the last handful of years. Giving us great uneasy atmospheres like you’re being watched, riffs that stab you in the throat, and vocals that sound like you’re talking out of the knife in your neck. Coming off two incredibly strong demos 20 Buck Spin picks them up to deliver their unique take on Death Metal to the masses.

“Unholy Transformation Pt. 1” opens up this slasher with ominous tones that creep on you with grunts and feedback until you’re faced with, “Highly Attuned Beasts of the Dark” that take you to their unknown lair and pummel you into a bloody pulp stripping you from you innocence and making you worship their gods that consist of the old souls such as, Incubus (Death Metal), Morbid Angel, etc.

After just getting your ears broke in from the previous track, “Spiritual Sunderance” is here to break your soul. With L.S. giving us his signature vocal pitch at the beginning opening up this dizzying track full of old school feeling riffs fast picking and dive bombs that seem to transition the song and also one of the best riffs this year starting around the two minute mark.

The “Unholy Transformation” interludes are great building blocks for the album giving us three parts of unnerving melodies that make you feel like you’re transforming your mind into its own being. Part two builds upon the album and is the more sinister of the interludes, holding out the final note for about ten seconds until thrown off balance by the tumult of, “Passage of Nullification” which cancel out your senses and blaze through you with harrowing riffs that sound like they are straight from the early 90’s.

Overall like I said to start this review off with, Superstition are young in the scene but feel like grizzled veterans that give us a unique perspective on the new age of Death Metal with a little old school flair that still holds up and sounds fresh. From the reverb on the vocals to the dive bombs sprinkled everywhere, I’ll likely have this in my favourites of the year. If you’re not familiar at all with these New Mexican maniacs start at their demos and work your way from there. You won’t be disappointed.