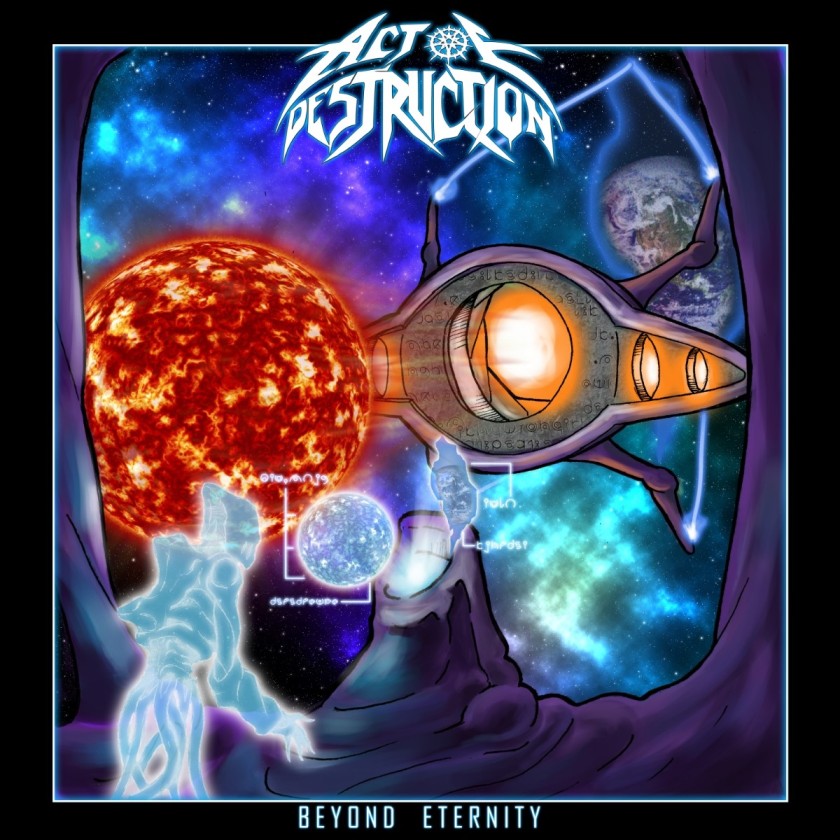 As the old adage says, “In order to move into the future, you must leave the past”, or something to that effect….I don’t know….I’m not a fucking philosopher. Even Kylo Ren; who may not be half the Sith that Darth Vader was, did get it right when he said “Let the past die. Kill it if you have to.”

It is fitting then, that a Chicago band going by the name Act of Destruction, would heed this advice; as the band that released their debut full length “Extinction” in 2015, bears little resemblance to the band releasing the “Beyond Eternity” EP in 2019. It may sound like hyperbole, but the band’s growth and evolution in that relatively short time span is on par with the growth demonstrated in a similar number of years by many legendary metal bands, such as Sepultura from “Morbid Visions” to “Beneath the Remains”, or Death from “Scream Bloody Gore” to “Human”.  For someone that missed the aforementioned band’s significant leaps in sound by only a few short years, there is something very exciting about being able to hear and watch a band find their voice and perfect their craft in real time, and not after the fact.

The most obvious difference between the two releases is the production.  While “Extinction” doesn’t sound bad by any means, its production is characteristic of that of a local band. “Beyond Eternity” however, you can clearly tell that the band went all out on the production job, sounding crisper, cleaner, thicker, and most importantly, heavier, than its predecessor. While “Extinction” was also more of a Thrash Metal tinged affair, “Beyond Eternity” dives head first into Epic Progressive Melodic Death Metal, with a little Power Metal thrown in for good measure, and retains only a slight hint of the band’s Thrash Metal past.  Guitarist and frontman John Bravo’s thrashy bark now takes on a more raspy quality better suited to Melodic Progressive Death Metal, while his brother/bassist/vocalist Nigel Bravo accents the vocals with his deep guttural growls.  The way both vocals blend together is so satisfying, you could almost strip naked and go for swim in them!

Tracks like the album opener “Eternal Combustion” and “Ascending Into Glory” combine the “more is more” approach of a band like Soilwork, with the Progressive Metal sensibilities of “Symbolic”-era Death, and gargantuan hooks that would give Nightrage a run for their money.  These songs have everything: Fast picked guitar lines, blast beats, memorable riffs, the sick dual vocals, and impressive soloing courtesy of guitarists John Bravo & David Kraus. “Spiritual Infinity” ups the ante even further by introducing falsetto vocals performed by guitarist David Kraus, and guitar playing that can only be described as fucking majestic, while drummer Jason Caruana and bassist Nigel Bravo keep the rhythm tight and energetic.

It is evident that Act of Destruction have grown and matured enormously as musicians and songwriters, as these five songs aren’t just a bunch of cool riffs strung together, but actual cohesive compositions with dynamics and individual identities.  This is most apparent on the final two tracks of the EP, “The Source” & “Starkblast”. Both tracks are considerably different, but no less heavy, than the three preceding songs. Both songs highlight the band’s usage of harmonic complexity, as opposed to the rhythmic complexity that is so prevalent in modern Metal, which definitely helps the band stand out from the crowd. The spoken narrations give the tracks an almost sci-fi/fantasy feel, and a sense of connectedness between the two songs.  “Starkblast” also features guest vocals from Andy “Pindy” Pindelski, vocalist of the awesome Armored Assault, who provides some truly otherworldly screams on the chorus.

If there is anything negative to say about “Beyond Eternity”, it’s that it’s too short, clocking in at just over 22 minutes. That’s a good problem to have, leaving listeners wanting more. I am very much looking forward to their next full length, and I foresee a bright future of destruction ahead for this band. So crank this one up, and do as the band’s mantra says, “Get Destroyed!!”