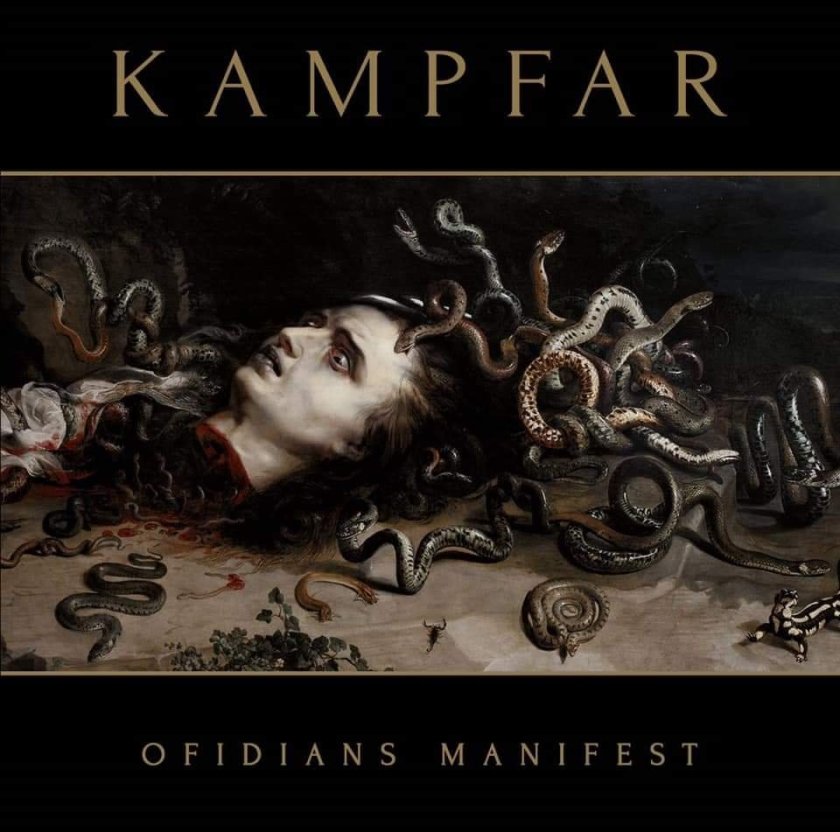 There are always three names that I immediately think of anytime Pagan Black Metal is mentioned, one of which is Kampfar. They are an unbreakable staple of the genre for me, and presumably many others. While it is to be assumed that you’ve taken up residence under a rock if you haven’t heard the name Kampfar by this point, I won’t be so ignorant to do so, as there are always people new to these genres who might appreciate a brief introduction. For those of you who may have not had the pleasure yet – Norwegian act Kampfar have been perfecting their craft of Pagan themed Black Metal for two and a half decades now, and have proven to be both incredibly resilient and succinctly consistent while continuously evolving. It doesn’t get much better than their classic “Fra Underverdenen” for me, although I’d be hard-pressed to find fault with anything in their discography.

The first notable difference from other Kampfar albums and “Ofidians Manifest” is the cover art.  The cover features a painting of a decapitated human head with a horrified look on its face, while snakes writhe and seemingly dance around the head. When taking it at face value, the painting conveys a feeling of dread to me – perhaps because I am not a snake person, or perhaps it’s the horrified look on the face of the severed head. However, after numerous listens to this record I feel there is much more to the painting than what is obvious at first glance. Snakes can signify healing and transformation, and that may be what Kampfar wants to portray to us, that they are growing as a band and transforming into something bigger than they’ve been.

The music on “Ofidians Manifest” reinforces this idea, in that Kampfar are showing significant advances in their style. While it seems that they’ve mostly slipped away from the Pagan themes over the years, the music still remains at least somewhat in touch with their roots. There’s no denying that Kampfar have continued to move in a forward direction from the much more raw nature of their “Fra Underverdenen” years (markedly starting with “Djevelmakt“), but no matter how much they change, they still retain their own unmistakable sound. I have great respect for a band that can continuously push themselves over so many years while retaining key characteristics in who they are. It takes a great deal of pride and courage to even attempt that, and an even greater deal of skill to make it work so well.

One thing that I really love about this album is that every track features a unique characteristic, from melancholic keyboards, ominous piano keys in a very carefully arranged section, war chants, or the addition of both downright creepy and exquisitely delicate female vocals – just to name a few things. Then there is the variety of venomously delivered vocals intertwining with rough shouts that work brilliantly throughout. On top of that, each song contains a slew of enormous riffs, and enough epic sections to make a battle scene in a major Peter Jackson film seem tame and boring by comparison.

I can’t help but feel that fans of newer Thyrfing albums in particular should be drawn to this album (count me as one of them), and not just because both bands seemingly have comparable career choices. While this isn’t the classic Kampfar that I’m used to, I dare say I might enjoy it even more! Every time the album ends, I am ready to hear it all over again and discover things that I may have missed on previous listens, and even if I discover nothing new, I find myself enjoying the album even more than on the previous listen. One thing that might turn some people away no matter how great the album is – the production is clean and clear. If you are able to ignore that, you should still feel a deep sense of connection with Kampfar here, which is one of the most difficult things for a band to pull off these days. Kampfar has spent far too long being overshadowed by their peers within the wide spectrum of Norwegian black metal and it’s long past time to give them the attention that they deserve.