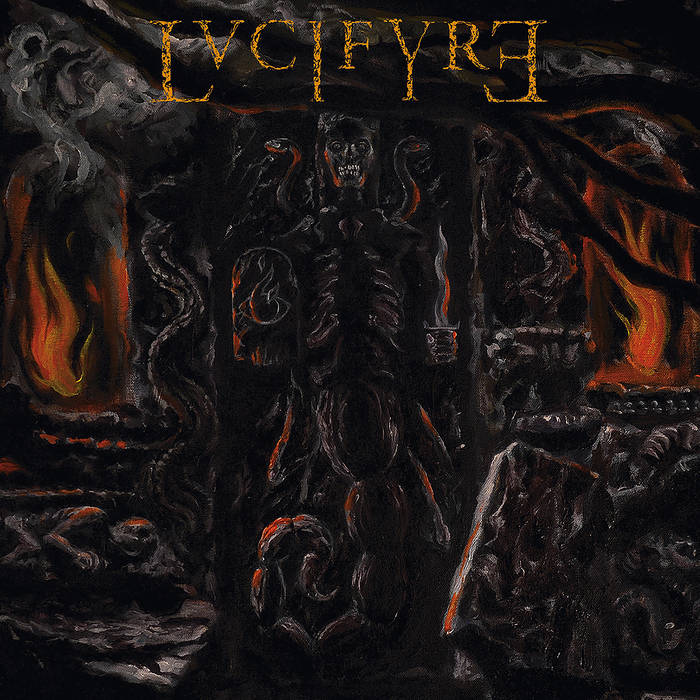 Holy shit, ProgCaveOgier and I didn’t clean up from the last joint we had and The Great Mackintosh just showed up. Guess the cleaning can wait. I’ll grab the shot glasses. Very excited to do this joint review with one of my good friends and what we have here is so sinister I think I just heard something in the room next to us. Mackintosh wanna go check that out for me?

Ever just listen to a band and get the unsettling feeling that someone is just watching you whether that be supernatural or your neighbour is the creepy guy of the neighbourhood? Luckily my neighbour isn’t creepy or a guy so it has to be the demons in the room, right? LVCIFYRE are those demons and they give you all of the hostility and paranoia of someone just staring at you, hypnotising you to the point of admiration making this the most cult/ritualistic release of 2019.

Coming off two absolutely monster full-lengths, these barbaric spirits from London are back with the EP, “Sacrament” and it’s a total must if you’re into relentless and violent Death Metal which lets face it, if you’re reading this you’re not into Imagine Dragons now are you? This is what the colour black would sound like if it were put into sound.

When this starts you are pulled into a dark room with nothing but sinister breathing around you, suffocating you with, “The Greater Curse” a seven minute nonstop archaic ride that wastes no time getting downright weird. Dual vocals in parts that sound inhuman, blast beats that sound barbaric, and bloodthirsty riffs that paint a whole new picture of fear.

“Deaths Head in Crown” hits you in different parts of the amygdala to give you a sensory overload of unnerving frightful pain right throughout your brain and you’ll never get your senses back. With backing off the blasts, Menthor gives us a more structured drum pattern all the while T. Kaos gives his finest vocal performance on the EP, sounding a lot like the very beast they seem to worship.

This release just creates so much tension as it goes on with tracks like, “Shadowy Wing” which seems almost like a prayer of sorts going in and out of clean yelling to the eerie screams of death and, title track “Sacrament” that follows the same line of vocal patterns as the previous track. And then last but not least the absolutely killer KAT cover, “Morderca” that really shows the versatility of the band as a whole.

All in all this EP really hit all of the right spots and creates an atmosphere better than most. I Ordered the LP version from the mighty Dark Descent Records, and I believe you should too. What does The Great Mackintosh think of it?

Honesty is a virtue, or something like that anyway, and to be completely honest I wasn’t going anywhere near this with a barge pole as they say, but ThatAstronautGuy can be pretty convincing when he gets excited about something, it’s almost bloody infectious. A few shots of whatever the fuck he pulled out of his space bag didn’t hurt at all either, so I thought bugger it, I’ll give this a listen, after all, I can just nod and pretend to like it even if I don’t,

I’m more of a straight up Old School Death Metal kind of bloke, and a lot of this Black/Death stuff just doesn’t sit well with me. It’s not snobbery or elitism, I just grew up with a certain kind of sound, and although my tastes can be broad I am infinitely more comfortable when I can easily identify with, as are most of us, to say otherwise would be flat out lying would it not? And yet, the sinister sounds emanating from the next room had me curious for sure. Creepy stuff indeed, as if Death’s very own horse was standing behind you flaring it’s nostrils, the stamp of a hoof, then the sound of a thousand flies descending upon the carnage of the battlefield fill your ears. You are fucked, and you know it.

“The Greater Curse” is a monster of a thing. Gnashing it’s teeth and flinging you around like a maggot infested corpse. Chaos inherent but surprisingly clear in it’s intent to leave you bloody and broken. Vocalist T. Kaos has learnt very well from the demons that must obviously be legion in his fucked up mind, and the rest of the band give the kind of symphony that only the purely damned will hear as their souls depart to far more horrifying places than you and I can ever imagine. Yes, this is good.

“Deaths Head In Crown” is another foul uttering from Hell, or Hades, or some unknown plane of existence that we cannot even begin to fathom. The voices, the voices, they fill your head to the point of insanity, and then the riffs, they crush you. Massive, gargantuan, they have grown fat on the suffering of many for sure. Powerful stuff, and insufferably pleasant to thine very own ears. More, I crave, and more they deliver. Madness put to music. The belching of horrors as they decide your shitty fate.

“Shadowy King” pretty much follows suit as ThatAstronautGuy stated. Almost like another spear pushed into your side when you are already at the point of no return, another reminder that you will not survive this, another reminder that your mortality is irrelevant, and death is the only reward you will ever receive. A short burst of madness, the insanity of your decaying mind perhaps, and then the titular track “Sacrament” bursts through gates of the finest materials ever known to mankind, warded by wizards and protected by a force of tens of thousands, and proceeds to lay waste to them all. Chaos incarnate, the death of all of eternity. The end of us all.

Kudos to the band as a whole. Cvltvs on bass and Menthor on drums alongside the already mentioned T. Kaos on guitar as well as vocals bring pictures to my mind that deserve much introspection. This is some seriously heavy shit, I kid you not, and you would do well to heed my words. The closer “Morderca” is pretty good too, but dampened the mood for mine. It is great to see them honour a fantastic band, but with such a solid platform laid already, I hate to say it, this EP could fare well without this song.

Thanks to the band, and thanks to ThatAstronautGuy for his enthusiasm. This is fanfuckingtastic stuff. I’m glad you sent me to investigate. Time for another shot, and let’s get another carton of beer while we are at it!

You need this, so find it here!