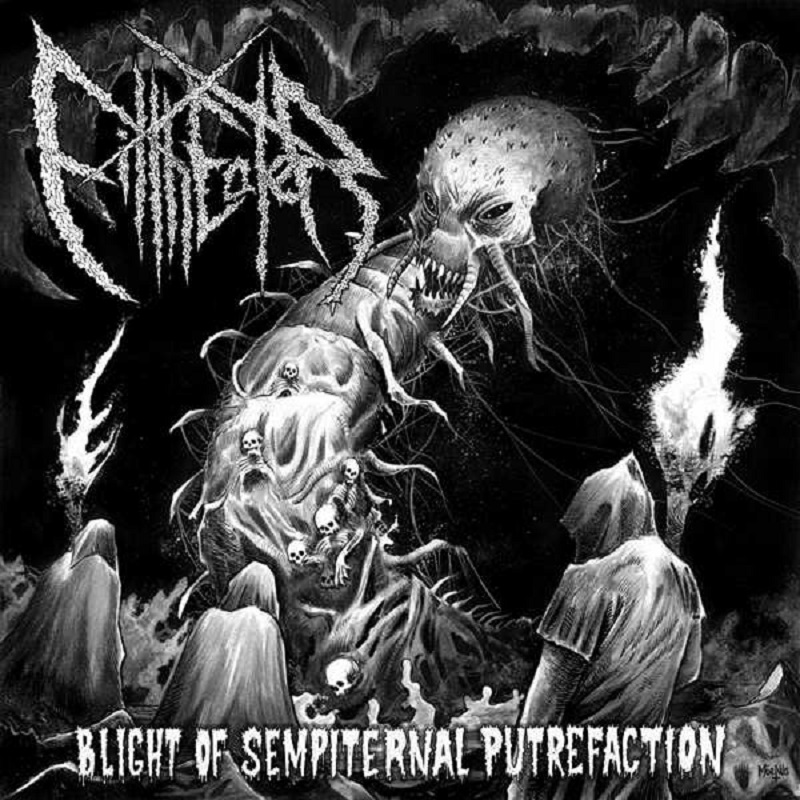 Ah, eating filth. This brings one image to mind, and it won’t stop repeating in my mind. Imagine a Golem-like creature, scuttling around on all fours in a dank cavern, reaching in every crack and crevice it can find, searching for only the finest filth as if it were black truffles, and choking it down with a repulsive vigor. At that, let me introduce to you Filtheater – assuming your aren’t already familiar with them. This is a group of four individuals from an undisclosed location within the United States, and according to Metal-Archives, these are the same four individuals that started the band back in 2010. I like the tenure. Interestingly, they only have several EP’s and a split to their name, with “Blight of Sempiternal Putrefaction” being their first album in six years, as well as being their first full-length. They must have been to some dark, dangerous places over those six years, and they’re on the cusp of force feeding us some of the very pungent filth they’ve been fermenting… Gape your maw guy’s and gal’s, it’s time to feast.

This album is dense – like attempting to navigate an unfamiliar area through an impenetrable fog, where your vision is limited to mere millimeters in front of you. Then there’s the unforgiving humidity, which is so swelteringly high nothing like it has been recorded before, as no one could possibly live through such discomfort. Lastly, it feels like trudging through an uncharted swamp, perhaps not entirely unlike the Swamps of Sadness. Your legs sink several feet in the muck, struggling to walk even a foot. These factors all combine to make a truly claustrophobic and suffocating environment. Assuming that Filtheater is purposely going for this dismal, demented atmosphere – they hit the nail on the goddamn head. For my money, it couldn’t get much bleaker than this.

Alright, we know this album is going to great lengths to oppress our happiness, so it’s time to get down to brass tacks. Most interestingly, there are surprising similarities to Brodequin, but aside from the occasional percussion blasting you to another multiverse, these similarities are much more prevalent in the sound and atmosphere of the album than in the structure of the songs or style of the music. It’s a muddy sounding album, but I think that works in favour of Filtheater, and if you have any doubts about this then either re-read the above paragraph, or you simply don’t belong here. Despite the muddy sound, the guitars cut through like razors, the bass trudges heavily like the foreboding rumble of a tank, the drums punch like the fire of an automatic rifle, and the vocals encroach on your sanity with otherworldly howls.

This all combines in to a colossal package, but I want to focus specifically on the riffs. It took me a few listens to really understand how to cut through the layers on this album and truly take in everything that is going on in any given song. Upon my first listen, there were only a couple of songs that really stood out to me – especially “Vapors of Human Sacrifice”, with its almost dystopian structure and occasional authoritative groove. However, now that I’ve informally been initiated in to Filtheater’s level of psychosis, I’ve found that every song has a serious amount of sinfully delectable riffs. The kind of riffs that make you want to repeat the song just so you can hear them again, and again, and again… Some are heavy enough to be reminiscent of Gorguts at their sharpest, while others are dark enough to be reminiscent of Incantation at their most haunting. Don’t let these comparisons fool you, though, because these riffs are still Filtheater riffs to the dreary end.

While they infest the current crop of cavernous Death Metal with a striking amount of repose, Filtheater still manages to, at times, bring to mind a resemblance to dark Brutal Death Metal with how relentless they can be. Let’s not forget, though, that Filtheater manages to stand alone on merits of their own, not of their influences. While it is easy to glean similarities to this band or that band, what you will get from “Blight of Sempiternal Putrefaction” is an album that sounds like “Blight of Sempiternal Putrefaction” – not an album that sounds like “Diabolical Conquest“. This is what I greatly respect about Filtheater – along with many modern Death Metal acts – they have found a way to craft music that may remind you of other bands, but will always stand on its own as a unique entity. There may be more bands in Death Metal alone than any one person can keep up with as we move ever closer to the third decade of this century, but bands like Filtheater are here to assure us that Death Metal can not and will not become a stale genre despite the enormousness of the crowd. I sincerely hope that it will be less than six years before we are treated to another Filtheater album, but if the result is as grandiose as this one, then I am okay with the wait. Buy this album, feast on the rot, and sink into hallucinatory madness – you owe it to yourself, and especially to bands like this.