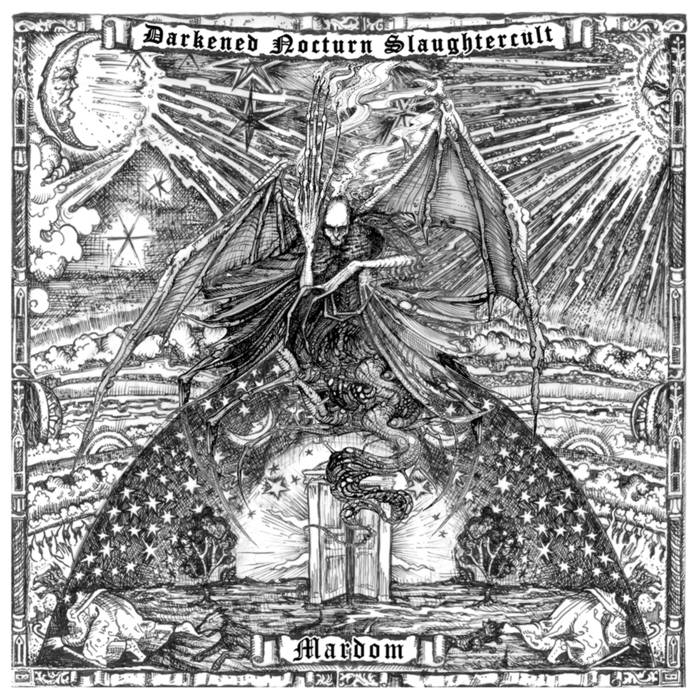 It’s been six years since German Black Metal legends Darkened Nocturn Slaughtercult released “Necrovision” which, in terms of depth, richness and brutality was yet another step up from their previous four releases, I can’t say they’ve ever done a bad album to be fair to them and the good news is they’ve continued to build on that ever increasing excellence with their sixth offering “Mardom”.

“Mardom” is  ten tracks, spanning forty-three minutes of icy cold and raw Black Metal excellence very much Norwegian  in style but with their own added flair, a ferocious onslaught of unrelenting and often wonderfully unpredictable raw blackened riffs, utterly superb drum work from Horrn that makes its presence felt but doesn’t override, it bolsters the sound and has some pretty flamboyant patterns woven into it adding depth and pomp overall.

Onielar continues to impress with her vocals, the first time I ever heard them I was hugely surprised and delighted to find a female was responsible, she can stand shoulder to shoulder with any male in terms of power, range and vitriolic intent, she is one seriously  good vocalist, irrespective of gender, but I have to confess to feeling a huge sense of female pride when I hear that delivery, but ultimately it’s just a continuation of an ethos of excellence that is encompassed in all aspects of the work of Darkened Nocturn Slaughtercult as a unit, from composition to delivery, I can’t fault even the tiniest element particularly with this release.

Opening on “Inception of Atemporal Transition”, an interesting Psychedelic, Industrialised intro before the fist track proper “Mardom – Echo Zmory” and it’s straight in with a tirade of intense riffing punctuated by Onielar’s evil laugh, heralding the start of her vitriolic vocal onslaught and a few bursts of drum work punching through also, a phenomenally powerful start to the album.  “A Sweven Most Devout” continues in the same manner as its predecessor dropping away briefly midway before a second assault, punctuated by Onielar’s blood curdling scream, she demonstrates a good range of ‘voices’ on this track also and “T.O.W.D.A.T.H.A.B.T.E”  has some impressive melodic changes bolstered by more impressive drum flourishes.

Between many of the tracks there are small interludes of ‘sonic noise’ developing more before “A Beseechment Twofold” with the addition of sinister bells, a track that is slower to open, sinister, like the preceding interlude, dark and groovy , an engaging piece which beckons you and once it has you in its grasp the pace quickens and intensifies, the bells that heralded the start of the track reappear from midway when the pace drops down again briefly. The interludes of noise develops fully in the shape of the second half instrumental “Widma” completed by distant screams, moans and other voices, an eerie haunting piece.

I loved the closing deep choral backing vocals on “The Boundless Beast” adding atmosphere to its  haunting close. “Imperishable Soulless Gown” takes it down a notch, it’s still a brutal onslaught but not quite as frantic paced as most of the album with a further haunting mid point drop, speeding up at the command of Onielar’s battle scream.

The final track “The Sphere” is one final galloping onslaught, black, intense, and filled with a harrowing vocal delivery and possibly the best drum work of the release, hard to say as it’s so good throughout, midway you get booms from what sounds like a timpani adding a darker edge and all band members seem to ram every last ounce of effort and energy into this dark, intense, punchy, terror filled closer with a nostalgic haunting piano close that fades to those eerie noises once more.