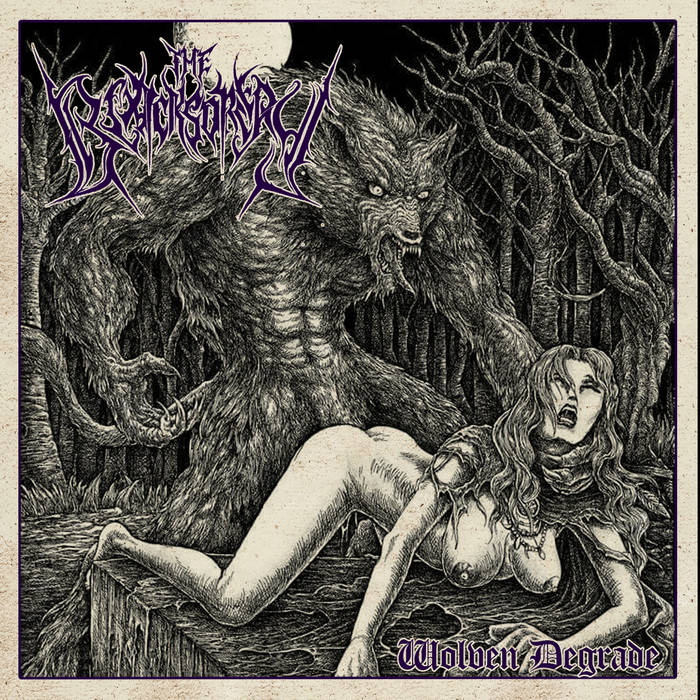 Less than twelve months ago the Edmonton based bestial Black/Death Metal brigade The Black Sorcery, (featuring members of the Black Metal outfit The Projectionist), assaulted our ears, in the nicest possible way, with their debut release “..And the Beast Spake Death from Above” and not wishing to let the dust settle on the carnage unleashed there, they return with its equally brutal slammer of a follow up, “Wolven Degrade”.

To give you an idea of what to expect, vocalist Lörd Matzigkeitus explains: ‘”Wolven Degrade” is the auditory warfare of pure, unfeigned anger. As a whole, its themes are that of deflowering peace, processing violation, ruinous existence and nature clawing back unto her dirty folds all weak creatures for their transgressions. The music on this, our second genocide, is a cohesive front of total slaughter. Parageist, Ghast and Månas Reaver function in ungodly furies that few in Metal can match. This album was made with only the catharsis of grenade-like rage in its heart, with no consideration of the appraisal of mankind.’ ….However that just scratches the surface of what’s going on here.

“Wolven Degrade” is ten tracks, spanning twenty nine minutes of unparalleled raw brutality, to a larger extent brutal slamming in style, very loose down tuned drum work, raw break neck lead work, with Black Metal undertones and including the classical, very guttural indecipherable brutal slam style pig squeal vocals, reflecting just a small element of his normally massive vocal range, but fear not you’ll also get a decent share of growls, shouts and more incorporated because when it comes to vocal delivery Lörd Matzigkeitus is not one to skimp on range or variety.

Don’t let the more classically styled War Metal, scene setting intro “War Fangs” lull you into a false sense of ease because from the minute the first proper track “Intolerance Enthrone” opens it’s a full assault of slamming drums, squeals, growls and raw leads, with a blackened undercurrent coursing beneath, it’s this blackened undercurrent that really makes it a more rewarding listen for me and overall that full on slamming assault with the blackened undercurrent pretty much sets the precedent and dictates the tone and pace of the album.

Album highlights for me, and there are quite a few, beginning with “The Crone” which has an intensity that builds to an almost overwhelming level until almost midway before releasing its vicelike grip on your senses and taking a deathly drop in pace and mood, a nicely constructed track with more of a Death Metal undercurrent. “Body Coffin Betrayal” has a slightly Death/Thrash element coursing through its murky dark construct at times and feels tighter than some of its predecessors. Title track “Wolven Degrade”, I love the doomy opening which has excellent vocal layering before building in to the brutal assault you have now become accustomed to, alongside full tilt lead work that is neck snapping fast rather than complex. On “Worse Still the Fog of Man Settles” I love the poignant opening guitar squeals that are almost thrashy and reflect the vocal squeal  and the track also boast another raw, high speed solo burst. My favourite is the final track “Revelation of Dark Succumbing“, dark and heavy to open, the pace picking up like an out of control, runaway tank, with a lovely sinister repeat riff and dark undercurrent and closing high speed raw lead work, an excellent track. Now that’s how to end an album!

“Wolven Degrade” is out now on CD via Krucyator Productions and on vinyl via Appalachian Noise Records as well as digital format from their Bandcamp page, hard copy is selling fast so if you want one you better get in quick.