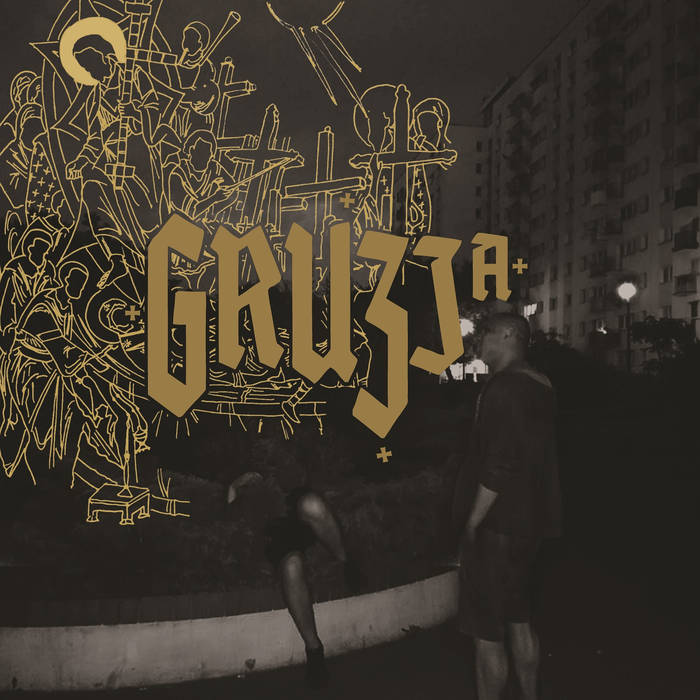 Polish Black Metal entity Gruzja have taken a punishing and unusual slant on Black Metal with their debut offering “I Iść Dalej”. It’s grim and raw often with surprising influences embedded within the blackened core and lyrical inspiration coming from the bleaker side of existence. It’s a compact offering, seven tracks spanning just under twenty-nine minutes but you get a lot within that timescale as it’s densely filled. It took me several listens to get my head around this release but the more you listen the more you can’t help but love it, it really grows on you.

Opening track “Gruzini” is bleak to start, panning out into a ferocious number, groove rich with acerbic vocals and dirty fuzzy riffs. “Moja Ratyzbona” is slower, with fuzzy tones that also have a dirty edge , powerfully emotive, you don’t need to speak Polish , as all the lyrics are in their native tongue, to appreciate the bleak intent here. I particularly like the range of ‘voices’ used in the vocals.

“Opuść mnie” is  another ferocious onslaught complete with  a tortuous vocal delivery whose energy matches that wall of blackened riffs, midway the pace drops to a classically styled, pounding blackened riff but is no less powerful, a superbly dark track.

“Manam” has  a really dark attention grabbing  groove, the hauntingly bleak segments add a lot of atmosphere that errs on the edge of psychedelic and the second half acerbic vocal screams rip though your soul, there are some very sixties style psychedelic background sounds in the latter part which sound a bit like a Theremin.

After a burst of feedback “Jego głos”  becomes  a solid and fierce piece,  a straight forward track that for me reflects the early days of Black Metal and  that delivers the goods. “IIu nas było?” is almost funereal in its pace and with a very old school Black Metal feel again, hypnotic repeat riffs contrast against deranged acerbic vocal screams, with sinister spoken passages as the pace drops further and all the while that haunting hypnotic repeat, building to a crushingly dense, slow zenith before dropping away to a bleak sparse wall of noise and fading guitar overlaid with more sinister spoken elements.

Title track and final piece “Iść dalej” is a real wild card, drum and bass meets sixties psychedelics, haunting and sonic and really good, not at all what you’d expect on a Black Metal release but it’s delivered with such intensity and dark intent it fits perfectly.

As debut releases go “I Iść Dalej”  is a pretty impressive offering, well varied, well composed and delivered and  is available from their Bandcamp page as a digital or CD release via Godz Ov War productions.

Right here it is!