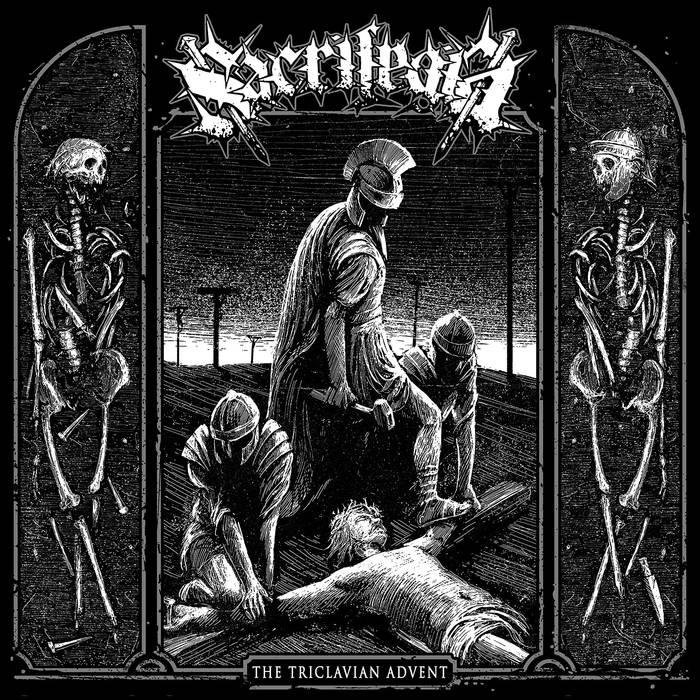 So, I’m gonna get straight into the review because that’s what Sacrilegia do with their debut album “The Triclavian Advent”. This album launches straight out of the speakers like a pulveriser, smashing and tearing its way through buildings and other huge shit, and brings with it eight tracks of unadulterated Blackened Thrash.

“Relics of Oncoming Doom” the opening track, starts the savage aural assault and the rest of the tracks keep the violent and beautifully brutal beating coming. “Beyond the Foulers Snare” provides brooding and dark melodies combined with in your face guitar licks and vicious riffage. I would imagine that the putrid menacing vocals seem to be replicated straight from the voice of the warrior demon Duke Eligos as he calls his sixty legions of demons into battle against, well whoever he doesn’t like, I guess.

The ungodly anthems of obliteration keep coming with “Armoured Angel”, “The Unhallowed” and the most excellent “Unheeded Warnings”. Guttural growls with frenetic drumming push the tracks along as they demolish anything and everything standing in their way as they ascend upwards from the darkest corners of hell.

Although this album is so very ferocious with no quarter asked and none given, that doesn’t mean that there isn’t beauty behind it. The musicianship and production are right on the money, and as this is Sacreligia‘s first album, God help us when they release further collections of songs that will make your eyes bleed and your heart beat at a million miles an hour.

All Metal followers need to listen to “The Triclavian Advent”, because it will make you wanna climb mountains barefoot, sail into uncharted waters to discover new lands, and declare war on just about everything, and then just when you think your safe and have got the tunes out of your head, it will torment you in your sleep.

I fucking love this album, and was hooked from the very first listen, and when this aggressive assault of the senses ended, I asked my inner self “Please sir, can I have some more?”. Then I reached over and pressed the play button and once again I was in my happy place.

Get all thrashed and blackened right here!