Plague Throat are a band with many fans here at the TMW. The band released their 2nd EP, Evolutionary Impasse a couple weeks ago. Fellow writer The Great Mackintosh said about the release “it is enough to make you believe that the monster is well and truly alive, and evolving at a rapid rate.”

I spoke to vocalist/guitarist Nangsan Lyngwa about Evolutionary Impasse, their upcoming shows and more.

You have completed 10 years as a band. How does it feel looking back at the past decade?

PT: It has been tough and it has been fun too. We’ve worked tirelessly over the years, played the best gigs of our lives, made a lot of friends. We’ve lost people close to us in these ten years and their lives have influenced and inspired us. I’m also glad that we’re still together doing this despite many difficulties along the way and we’re very grateful to our families our friends our former band members, our supporters, anish bhattarcharjee for managing the band the past years and helped us in releasing our debut EP with Ajaya bhat from incanned productions, kunal choksi from transcending obscurity, the promoters and to everyone who have helped us in any way or form.

Your album Evolutionary Impasse is a hard hitting release. What is the inspiration behind the album?

PT: After the two releases, i just felt that we could do better and write more music and to be honest i wasn’t much satisfied with the human paradox. I pushed myself more and worked harder and I can say that this is by far the best work we’ve ever done.

PT: We love adding different elements in our music, we have influences of course but we have always let ideas come to us naturally rather than forcing ourselves.

Do you feel that being a duo has a impact on the writing and recording process?

PT: Since the inception of the band it’s been mostly the two of us writing and arranging, so it’s nothing new, I’ve recorded the bass myself for all our releases. 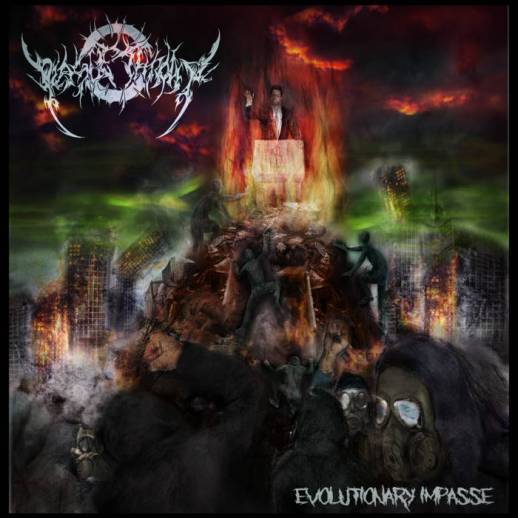 What are your currently listening to (metal and non metal)?

Evolutionary Impasse is being self released, what was the reason behind the move? What do you feel are the pros and cons of self releasing your music?

PT: We have a lot of freedom from self releasing . But it comes with a lot of work as we have to be involved in shipping, accounts maintenance etc , so a lot of factors go into making a self release.

What are your thoughts on the current state of death metal?

PT: I think it’s doing great, like what Alex Webster said in one of his interviews that death metal has never gone up nor went down. It has always remain the same.

The album was launched with a hometown show. Do you have more shows coming up?

PT : Yes it’s a great feeling that we could launch the EP at home and play the entire EP for our friends and our supporters. And yes we’re doing a tour in a couple of months

You have an Asian tour planned in September. What are you looking forward to?

PT : We can’t wait to experience playing to a whole new audience, share our music with other metal fans from different parts of the world .

Thanks for answering all our questions. Do you have any final words?

PT : Thank you all for your support we really appreciated it and we hope to see you on tour. Spread the plague.