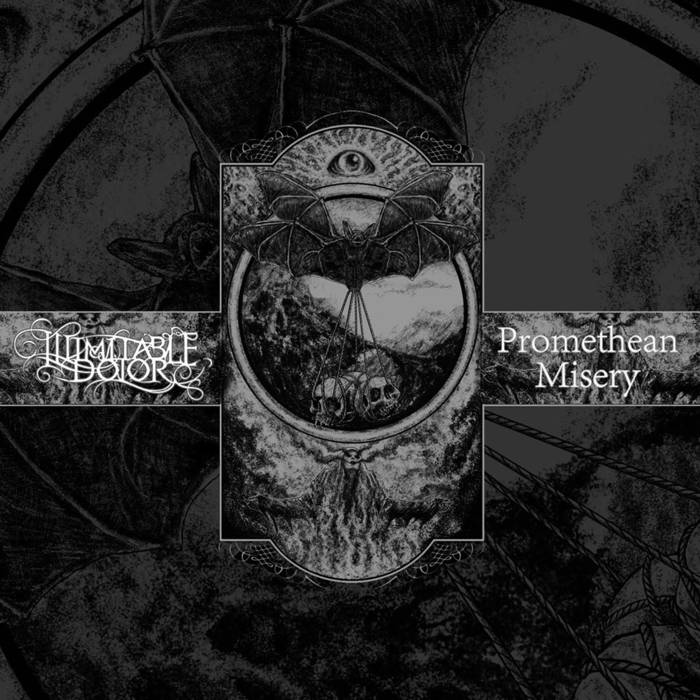 A quick review should be in order, one would think, with this little package from two mighty Australian acts, Illimitable Dolor, and Promethean Misery, but that may well not be the case. As will all things of such excellence, one must take one’s time, as one should. If you are a fan of such majestic music, then my words will be but a brief moment compared to the utter depth of hugeness these two acts have managed to pack into a four song split. So let’s start at the beginning, and hopefully meet at the end not too miserable, all glad that we have heard such wonder.

I am a huge fan of Death and Doom, mainly Death, but Doom done right can be a wonderful thing. We can think back to bands like Candlemass, Saint Vitus, and always My Dying Bride, being one of my all time faves. Heck even Paradise Lost (gods that they are) have had, and will have their doomier moments. Black Sabbath propelled us into the slow riff, the sad lyric, the slower, longer song, and a lot of us have loved it. My tastes have grown more into the Death/Doom side of things as I’ve gotten older. Bands such as Atavisma, Kåabalh, Spain’s Ataraxy, and Finland’s Lurk finding that precise line between the morose, and the ‘just done right so as not to be boring as fuck’ with expert precision. Other bands have come and gone, as they do, and then along came Illimitable Dolor.

Long story short, Illimitable Dolor were founded by lead man Stuart Prickett back in 2014, signed with the leader of the pack at the moment Transcending Obscurity Records, and have their latest one “Leaden Light” coming out in March. Describing themselves as ‘Funeral Doom’, one can only concur, but whereas much of the said Funeral Doom community can leave you feeling bereft of soul and purpose, these guys just don’t have that effect on me. Yes, it’s certainly fucking doomy, and as you will see from track one “Kitsune“, they are not here to give you any other illusion. Slow, dread filled riffs, the keyboard from your local funeral home and or church, and the laments of a dying god or a dying something await you.

No clean vocals, just misery, plain and simple, but somehow joyous in delivery. An odd thing to say for sure, but when a song is delivered this well without going over the same tired old pattern of miserable riff, miserable word, miserable fucking whatever over and over like some, these guys have may have realised that they are hardly going to win any new fans by doing such. “Kitsune“, at a mere six and a half minutes is almost like a mere warm up for these guys, and a great start too boot. This is pure heaviness on so many levels, but no Albatross around your neck to be sure.

Their second offering on this split, “Tamtu“,  is not here to fuck cats as we would say down under, coming in at a whopping nineteen minutes. It’s serious time, seriously. Again you are greeted with the sounds of pure sadness, an atmosphere of such loss and such deep pain that is enough to make even the bravest man falter and think of all things lost, all things he has never done, all things morbid, and all the things he will never do. Such a level of musicianship, such an expression of the will to tell their tales regardless of whether it fits into what is acceptable or not.

Patience is required, but I for one can tell you now that these songs feel like mere seconds at the end, you want them to go all day, you begin to associate with them, and by some sort of fucked up osmosis they become whatever you want them to be. A soundtrack to your own pain perhaps, the music of your shitty existence maybe, the very music that you would have played at your own funeral? I will leave that up to you, but it is exceptional nonetheless.

Act two gives us Promethean Misery, or more to the point one Samantha Kempster. Now currently working with another Australian idol of mine, and well deserved idolatry it is, Cruciform. If you are unaware of Cruciform you need to listen to them, then go sternly berate yourself for being such a dick, and yet I digress. Samantha is a multi talented, many instrument playing person of such interest that she may as well be Australia’s very own answer to Myrkur. The difference lies in the delivery, and Samantha brings the Doom, the oh so sad Doom, and says fuck you to the frosty nights with her combination of piano, violin, and her very powerful voice.

First track “Mind at Wrest”, brings all the Doom you need right to your very feet. I have no idea if anyone else contributed to these two songs she has on offer, but believe me when I say they that Samantha is no less heavier in her particular approach. You need to hear her version of My Dying Bride’s “From Darkest Skies” to get another idea of the level of awesome this lady can deliver, and yet again on this song she does just that. You want morbid shit, you’ve got it, You want the sounds of all the sadness you have ever bottled inside yourself laid plain out on a plate for all to hear? Thank Samantha for what she has to bring. You will not be able to breathe, let alone form a single thought. To describe the music she has on offer here is no simple task.

Her second one on this effort “Shadow Fell and Followed” could contain much meaning. Did the shadow fall, and you decided that was it, for the rest of your life under the shadow you would live? Was the shadow so fell in it’s ways that it convinced you to become one with it, and live for ever more in utter despair? Did you follow the shadow into realms unknown and now seek your very own end? I cannot answer these questions, only you can. Such excellence on display here, you will think much more before you can answer, and that is a fact. Such a glorious moment. The morbid tone of the piano that makes everything so sad, the voice of an angel questioning her very existence, moving on to the kind of lament that only one who has truly suffered can bring to us. Again patience is required, but it will give you so much if you stay the course.

So, here we are. I am not overly miserable, and nor shall you be. Over the course of four songs we have heard the finest of suffering on offer. We have listened to these artists show us their pain, their lowest of the lows, their souls indeed. An oddly uplifting experience, for both of these artists have given us their all, and I for one truly appreciate it. You should too, so go check out their earlier stuff, you will not be disappointed.

Be one with your misery, and the ultimate in Doom.