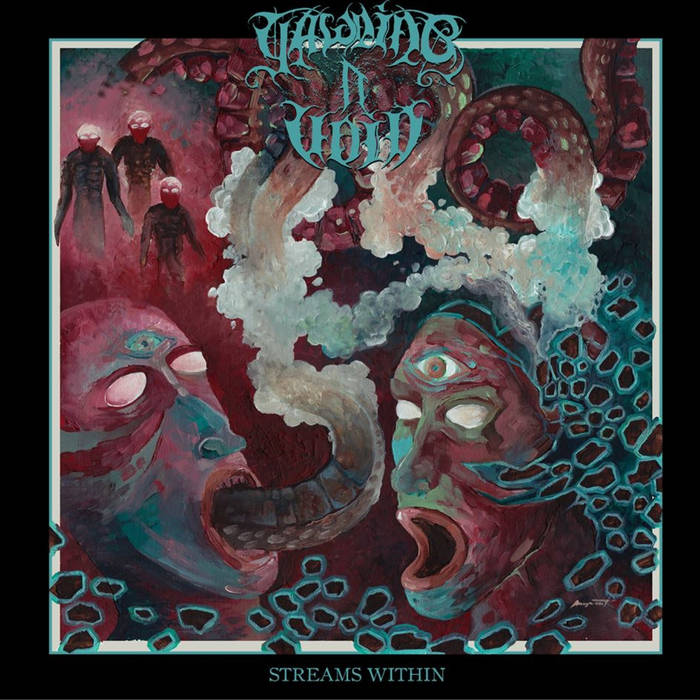 2018 was maybe a slightly boring year from a Doom Metal perspective, when you think about it. Many of the releases were lacking in the field of experimentation and this made the vast amount of Doomy crawl sound like something you had already heard. Uninteresting and generic. Luckily 2019 seems to be starting out in a much more interesting fashion, at least if the debut album of Yawning Void is to be believed.

Hailing from Turku, Finland, Yawning Void is a collection of four musicians from the local scene. Their combined band history in Metal Archives spans through several outfits of various musical styles (the mighty Solothus being the most known of the bunch), but none of the groups listed can quite prepare you for what “Streams Within“, the first album of Yawning Void is all about.

“Streams Within” has elements of Death Metal and Black Metal present, but the atmosphere is still above anything Doomy, occasionally quite close to ambient even. Meditative extreme metal for grumpy mornings, so to speak. When the closing track “Aequor Benthic Bodies” closes with slight nods towards the Scandinavian progressive rock of 1970’s, “Streams Within” could sound on paper like a bunch of incomprehensible  stylistic mish mash. Like a fake, ‘hipsterish’ combination of different musical approaches that really have nothing to do with each other.

Luckily this is not the case with Yawning Void. Quite far from it, actually. All these various musical elements that could easily sound pretty irrational together, appear harmoniously side by side during the whole duration of “Streams Within“. Seamlessly and serving a larger purpose they are, giving out an impression of a well taken care of arranging process. The record is a bit like something painted by a certain Hieronymus Bosch, when you think of it. Impressive amount of details included, yet it paints a larger and quite ominous overall picture. Lyrics shift in between English and Finnish and especially the ones written in their native language give Yawning Void a definite character of their own. The English ones are not bad either, but it is something in the way the Finnish texts are rhythmically arranged on top of the layers of music that really seem to suit the band’s overall sound well. And with these tunes lies also the most potent promise of future glories for Yawning Void.

Apart from the impressive sixteen minute closing track, “Streams Within” holds plenty of gems in it. “Melaina Kholee“, “Ouroborean” and “Kalmoranta” are all enjoyable listening. Fans of Incantation, Moonspell and Ajattara – hell, even Stoner Doom, should all find their own favourites here, but somehow Yawning Void are above all your regular name dropping frenzies. The pieces of the puzzle are sewn together in a way that sets Yawning Void apart from any other band going on right now. There is loads of that famous Finnish melancholy present, which has gone global with albums of Amorphis and Sentenced for example, but it is diverted into a shady and mysterious form here. There are various elements familiar to fans of Finnish Black Metal on board too, but Yawning Void has still nothing to do with bands like Horna or Sargeist. This is something you will have to just listen to, as none of the descriptions here does this complex beast quite the justice its rotten rainbow deserves. You need to hear this to fully understand the balance of complexity and the holistic experience “Streams Within” has to offer.

An album like this could not have been possible to make with a dominant producer on board. No way. Often they tend to rub off the extra edges from music, trying to make things easier to digest for the audience. This would have meant a whole deal of magic taken away from the album. Yet, there are some elements an outside pair of ears could have improved too. “Streams Within” has a bit of a demo-like quality to it throughout. It manifests in several cases of ‘almost there’ in overall performance, both, in the musicianship itself and in the mix too. The drums have a slight clumsiness to them, especially on the proggy bits, and some bass lines tend to cut through in a slightly irritating manner here and there. Still, none of these minor faults do not ruin the listening experience and can be seen as contributions towards the underground Metal vibe even. After all, none of the legendary underground classics we all worship were classics by production standards.

Keeping everything being said in mind, it is pretty easy to see why “Streams Within” is such an interesting record. A bit on the weird side, but piquant nevertheless. After all, weird is often good, and normal quite boring. “Streams Within” is a mysterious looking worm from the underground and it crawls far below the surfaces of mainstream Metal. Known only by few, but still being there, digging away and doing its thing. Certainly not an album for boxed thinkers, nor friends of easy musical solutions, but if you are into the various shapes of grey the underground Metal scene has to offer Yawning Void are a band to look into. One can only hope that they release a follow up to “Streams Within” soon, as the Metal scene definitely needs more sonic Rubik’s Cubes than it having right now.