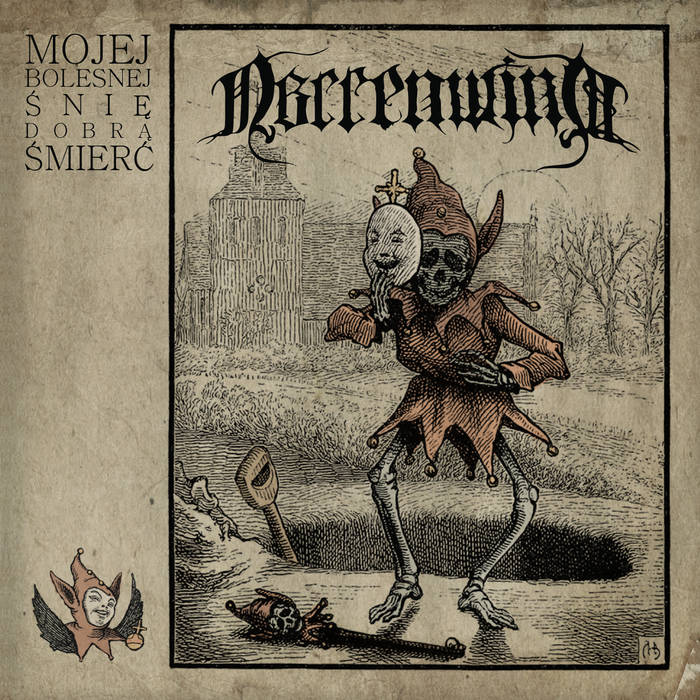 Yet another example of Polish Metal excellence is the debut full length “Mojej Bolesnej śnie Dobrą Śmierć” (For my Dolorous Lady I dream a Merciful Death)  from Polish Black duo, Narrenwind (wind of fools) which features Sauron’s multi-instrumentalist Ævil and Klimørh of Non Opus Dei on vocals, which, even before listening, suggests this is likely to be a worthy listen and it’s not an assumption that disappoints, “Mojej Bolesnej śnie Dobrą Śmierć” is all you’d expect and more.

As a band they’ve  really hit the ground running, forming June 2018 releasing the first single from this album “Wydłużam cień boga ciemności” in the September, the second “Wiatr głupców” in the October and the zenith of all this being this eight track, forty nine minute slice of Black Metal excellence.

Sound wise it reflects elements of early Bathory alongside a Burzum like dark solemnity, the mix of which has an engaging dark flow, wistfully crushing, rounded yet heavy. All balanced with venomous vocals and Polish lyrics, with three of the tracks including lyrics from the works of the three of the more fascinating Polish ‘poète maudit’ Cursed Poets, who, in life were linked to numerous moral scandals, their literary work usually rejected by their contemporaries, gaining recognition only after their deaths; Kazimierz Ratoń who died in poverty and alone after enduring a lifelong battle with Tuberculosis, Rafał Wojaczek who committed suicide and Tadeusz Miciński, who was assassinated during the Russian revolution whilst organizing Polish armed forces, including the album title track “Mojej Bolesnej śnię Dobrą Śmierć” which was dictated by Rafał Wojaczek himself during a necromancy ritual. Overall the album ends up sounding a little different from what you might expect from a Polish Black Metal band.

From the opening track “Wydłużam Cień Boga Ciemności” (I extend the shadow of the God of Darkness) to the closer “Nic” (Nothing), the whole of this album is a beautifully dark and reflective listen, haunting melodies, soaring leads and well phrased drum work all contrasted against Klimørh’s powerful vitriolic vocal delivery, thoroughly consistent throughout. If you like one track you’ll like them all, and I do, a lot. You even get a little hint of mournful saxophone on “Niebo po burzy, oczy ranione piorunem” (The sky after the storm, eyes wounded by lightning).

“Mojej Bolesnej śnię Dobrą Śmierć”  is available from Pagan Records as; a jewel case CD,  gatefold LP, regular black vinyl, gatefold LP LTD, colour vinyl and digital format and should have great appeal if you enjoy the work of bands like Bathory, Burzum or Isengard, It’s a pretty exciting listen.

Find this one right here.