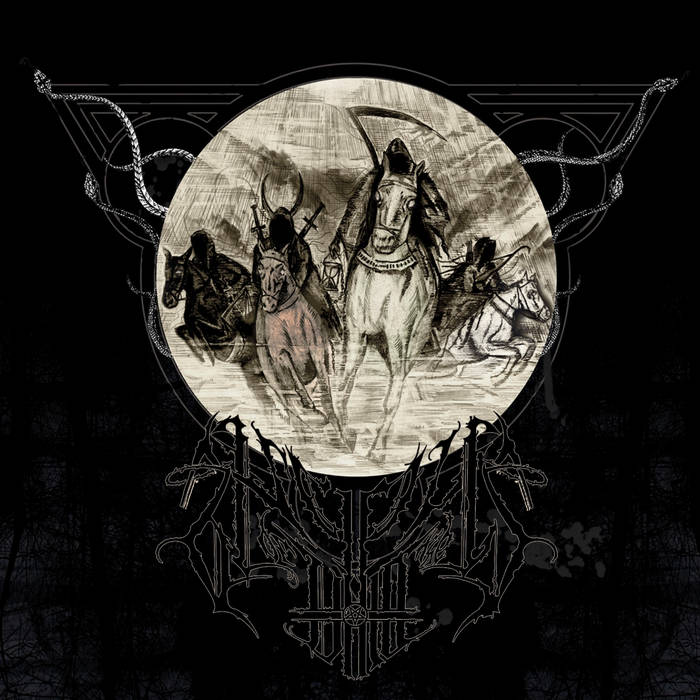 There is a new wave of Black Metal rising in Finland just now. More keyboard oriented, atmospheric and ice cold. Maybe less necro and rough when compared to the traditional Finnish sound (Horna, Behexen, Sargeist, Vordr), but creepy, chilly and most of all – damn well composed. The first signs of second wave black metal coming back were heard when Vargrav stunned everybody senseless with their marvellous debut album “Netherstrom” a year ago and Morgal absolutely nailed it with their brand new EP just recently. Now there’s a new band adding to the hailstorm and they are called Disciples of the Void.

My personal first impression with DotV did not have me that excited though. Firstly, everybody wants to call their bands as something to do with voids now. Come on – there are other words suitable for metal in English, you know! Not just void. Void of this and void of that.. Void of school girls.. ahem. OK. You got the point… But Disciples of it now? Come on! Another face palm followed when a band photo from the promo parcel surfaced and I thought for a second to be looking at the recent photo shoot of MGLA. Hell… What happened to originality in black metal?

Fortunately, what Disciples of the Void fail to achieve in areas of image they win back with the essential – the music itself. Their self-titled debut album is a surgically precise cut to the musical nerve of a nineties Black Metal fan. There is a direct link to the golden era from 1994 to 1996 to the present. “In the Nightside Eclipse” by Emperor, “Moon in the Scorpio” by Limbonic Art or “Nemesis Divina” by Satyricon all come to mind when listening to this. “The Apocalypse Reign”, “Per Aspera Ad Noctum“, or “The Harvest” are all prime examples of well performed and composed black metal art. Not overtly polished of course, but well played, atmospheric and not a bit muddy. Keyboards are added occasionally for an icy wind from the glaciers effect. This certainly is not music for necro Black Metal guys and gals, but resonates with the times when BM as a phenomenon started to get more and more ambitious with it’s delivery. When the album closes up with a stunning cover of “Home of Once Brave” by Bathory the chills run down the spine in massive surges. Re-spin!

Despite a bit of a lackluster first impression, Disciples of the Void hit the spot with their debut album, no doubt about it. This might lack the last essential drop of dust from the dead stars of bygone aeons to become an instant classic of the genre, but it is a winner nevertheless. A damn fine listen, where an Emperor fan can add the last point missing at any time through the sheer nostalgia of it. At the moment Disciples of the Void might not be the most original band in their approach (like Emperor, or Limbonic Art for example were!), but this a magnificent and most of all exceptionally promising start to a journey that will hopefully be as much a praised as the ones of their idols were. Let’s think about it this way, if this is their “Emperor” EP, what kind of a triumph will their next record be, when Disciples of the Void pace up to their “In the Nightside Eclipse“? Just think of that, okay? Until then, we blast this baby here loud with our grim and frostbitten beers and wait for the next chapter to be upon us. No fun! No moshing!

Get all frosty right below!