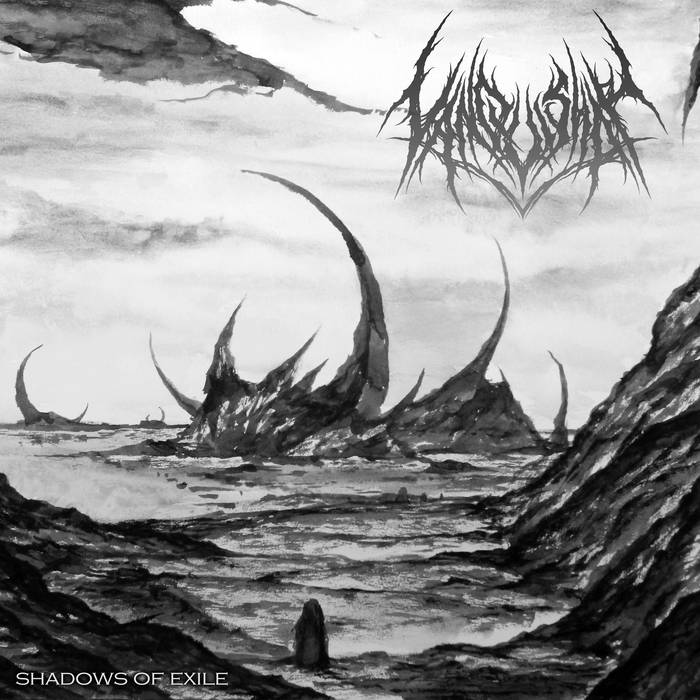 Ever since I first met ThatAstronautGuy, he kept dribbling on about being in a band. Not unusual for him, as I have previously stated his enthusiasm for all things Metal related has never been in doubt, nor his bloody enthusiasm for just about anything. He is a good guy, so we humour him.Today though, after the dust settled and my grass stopped burning from him landing his bloody rocket ship in my backyard, I could sense something was a little different. He opened the hatch and strode towards me as if in slow motion, with a cheeky smile on his moon face, handed me a package, then walked back in slow motion to his shitty ship and took off, burning my lawn, and my cat in the process. What the fuck?

Anyway, after putting out the flames and calming down said meow meow, I opened the package, and lo and behold on the inside was a tape with the word ‘Vanquishor’ scribbled across the side of it in crayon. Fuck it I thought, and slapped it into my old cassette player, and blow me down with a feather if I wasn’t amazed by the sounds that came right back at me. Okay, maybe he wasn’t kidding, and he actually IS in a band. As for the rest of the story, pure horse shit. He sent me an email with the files, no grass was harmed, and I don’t even own a fucking cat, but that was far more interesting than “today I received and email from Jon..”. So there.

Yes, Jon is his name. Jon Glenn to be precise, and now you may well understand why he goes by the moniker of ‘ThatAstronautGuy’. If you don’t, look it up for christs sake..Together with fellow band members Clinton (six string), Cody (four string), Dan (percussion) and Chad (screaming and grunting), Jon (other six string, or axe as he likes to call it), form this entity of which we speak, that being the mighty Vanquishor! What kind of music do they make I hear you ask? Well, it’s fucking Death Metal innit! Seeing as they hail from Kentucky, we could well call it Kentucky fried Death Metal, but that would be just plain silly now wouldn’t it.

First track, “Morning Star”, gives us a little display of some nice mellow acoustic work, and it is rather lovely to say the least. Some fine talent on display right there, but this is not why we are here now is it. Nice and cuddly, like my poor burnt cat….After about three minutes the pleasantry stops a tad, and then they treat us to a bit of a swampy sounding segue, that then builds into the sound of a man roaring his heart out over some fantastic rolling drum buggery, yes “The Jagged Wastes” launches itself at you with great gusto. A certain band springs to mind right from the offset, but this one deserves more of your attention before we start bandying comparisons around all willy nilly and such. A bruiser of a song, and towards the final stretch one could be forgiven for thinking that a certain mr Jeff Waters had entered the room, with his friend Alison Hell. Tis brief, but some of you may pick up what I’m laying down so to speak.

This is, first and foremost pure American Metal, nothing more, nothing less. Each member brings their wide and varied tastes into the mix, and although labeling themselves as Death Metal, it is fairly safe to say that there also resides a fair whack of Thrash in the delivery as well. I’m more than fine with that, because some of these riffs could flay the hair of a Bison at fifty paces. The final production, whilst not entirely perfect, brings a lot of these elements to the fore. Enter “Worms that Walk”, and let the crushing begin. Big fat juicy riffs with pounding double bass mayhem is the order of the day here ladies and germs. Old mate Chad doing his level best to sound like some kind of mad fucker, and pulling it off with ease. This man’s throat must truly hate him.

“Caverns” begins with the kind of swagger that belies the tender young age of this band. Another in your face statement of intent, and probably one that may really get people throwing the old ‘sounds like’ thing a happening, but all in all another fine display of Vanquishor doing what they have set out to do – vanquish us all. A more mid paced affair for the most part (I did say most) with some exceptional face rearranging outbursts of drum and chunk. The use of a slightly cleaner guitar sound in some of the riffing, and the solos pretty much have our astronaut mate and his buddy Clinton reaching for the stars, and I’m gonna say hitting them. Their sense of melody and the ability to hold our attention from one musical passage to the next is surely not to be doubted.

“Death Winds”does indeed start of sounding all windy in a deathly way before they bring the gauntlet down on your head with a resounding clunk. This would be my pick of the bunch, and is a textbook example of how to punch a song right through the skulls of thy enemies.The musical equivalent of a fucking steamroller coming through your front window. Riff after punishing riff pushing the song along on it’s path of destruction, bass and drum providing the necessary backup to really wipe that smarmy grin off your face if you even doubted them at all. About halfway along the galloping pace could almost be described as Maiden-esque, yet again showing the vast array of influences this band has absorbed before they spew it all back at us fully digested and in a far different, yet extremely pleasing form.

Ending with title track “Shadows of Exile”, probably for mine the most by the numbers until they start fucking around with some interesting guitar effects, which then lift the song onto another level completely. By no means am I stating that this is in any way dull by saying ‘by the numbers’, but you will see at exactly which point it transforms into the realms of being one big bad motherfucker, and also the perfect ending to the album. Many kudos to all the band members indeed.

So, at the end of the day, all I can say is this. Minus my usual horse shite, this review is just about as much justice as I can do to this debut. By all means feel free to cry bias because I consider ThatAstronautGuy to be a complete fucking champion, but also take into consideration the fact that we here at The Metal Wanderlust get to hear one hell of a lot of music, and a lot of it we simply do not review because it is utter crap. Big bands, small bands, every band you can think of, we do not simply give them our time just for the sake of it. What Vanquishor have delivered here could be considered a fine mid or even later career album compared to some, the fact that they have pulled this out of their proverbial arseholes after being together for such a relatively short period of time speaks volumes for their future.

This IS American Metal, and by this you may all feel free to draw your own comparisons, but even compared to some of the best, this is a fucking belter of a way to start things off. Give it a shot, and enjoy the ride. It took me very little time to get the ‘sounds like’ shit out of my head, and just enjoy the awesome that this brings. Quality stuff indeed.

Get this one right here! Do it!