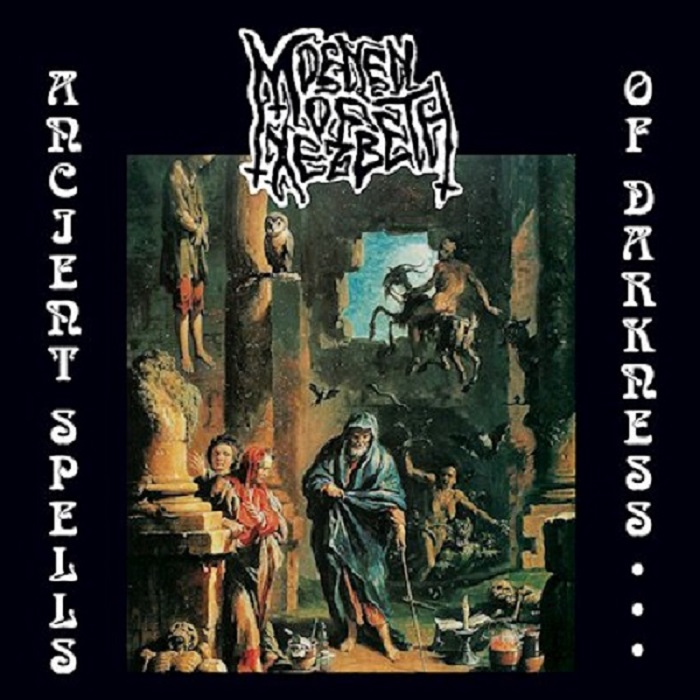 Black Metal has always been one of the most distressing, horrifying, and blissful experiences when it comes to jamming an album. Almost as if every note is another screech of horror, another scream of agony and yet it is truly captivating. The raw aggression and power is such a driving force to the scene. Everything in Black Metal is so primitive compared to all of the other sub-genres of Extreme Metal. A scene completely on its own as far as that goes. So beloved within the community that you wouldn’t necessarily, “GET” if you didn’t know what was happening. You’d probably think to yourself, “Why do the dudes in the woods have face paint on and are screaming at the trees about Satan?” Well that’s just fucking Black Metal. And guess what? IT FUCKING RULES! HAIL SATAN!

Moenen of Xezbeth are in a league all of their own. Raw, aggressive, and down right scary. With synths that paint a picture of a medieval dungeon, vocals that shriek through the halls of said dungeon, and riffs that’ll break the chains of the handcuffs that shackle the prisoners to the walls and release them onto the people of the city causing total chaos and utter destruction. This shit is just true the blue textbook definition of the genre horror inducing Black Metal.

Coming off of an insanely fucking good demo, “Dawn of Morbid Sorcery” Moenen Of Xezbeth have no signs of slowing down as they rip and scream through their debut full length, “Ancient Spells of Darkness” and like I said in the previous paragraph this SHIT FUCKING RIPS. It damn near might be the most evil record of the year.

The intro to the record cleverly titled, “Intro” definitely sets the mood of the record to be weird and uncomfortable with a rhythm stringed instrument that is a single strum of some spooky chords and a drowning sounding lead guitar part with a simple melody that sounds like a happy trip to hell. The second track, “Into the Black Mist” really opens up the record well with the same sounding strum from the intro and then a THICK layer of the good good synth sound that honestly sounds like the best Halloween music of all time. Seriously layer it on any horror movie and it will fit perfectly.

The synth is super strong with this record and it might be the most endearing instrument on the album simply because you don’t hear it much in extreme stuff like this nowadays. Songs like, “Pandemonial Curse” and “Ancient Spells of Darkness” open up with a lead guitar and synth to create something extremely dynamic and just sucks you in to the evilness. The riffs are slow, and the record isn’t full of just insane blast beats like normal BM bands, just a slow and steady stream of vileness that isn’t so over the top. It feels genuine and authentic and almost organic in a sense. The production is probably my favorite thing about this. IT’S SO RAW, but not to the point that you can’t make out instruments, and just enough to make it have the old school sound that makes it even more so authentic. No frills jamming.

These fire breathing Belgians have more of a mysterious history as I could only find that, Morbid Messiah (Perverted Ceremony) is the only band member. I mean it makes sense given that a ton of BM projects you see anymore are one man bands. However their Metal Archives picture shows two members. Maybe one is Satan himself but he’s just too modest to take any credit. That’s the only thing that really makes sense because this shit is just too evil for a human to write. (Update – It is two members, but the other is cloaked in a shroud of mystery)

This is one of the best records of the year and absolutely adore it. I was jamming it constantly around Halloween watching the trees die and drop their leaves thinking to myself this is how it’s going to end. Listening to the devils band and scared shitless. hahahahaha.

MEET YOUR MAKER, BOW YOUR HEAD,  AND PRAY TO THE DARK LORD HIMSELF. HAIL SATAN, HAIL MOENEN OF XEZBETH.

Pay homage to the dark ones below!